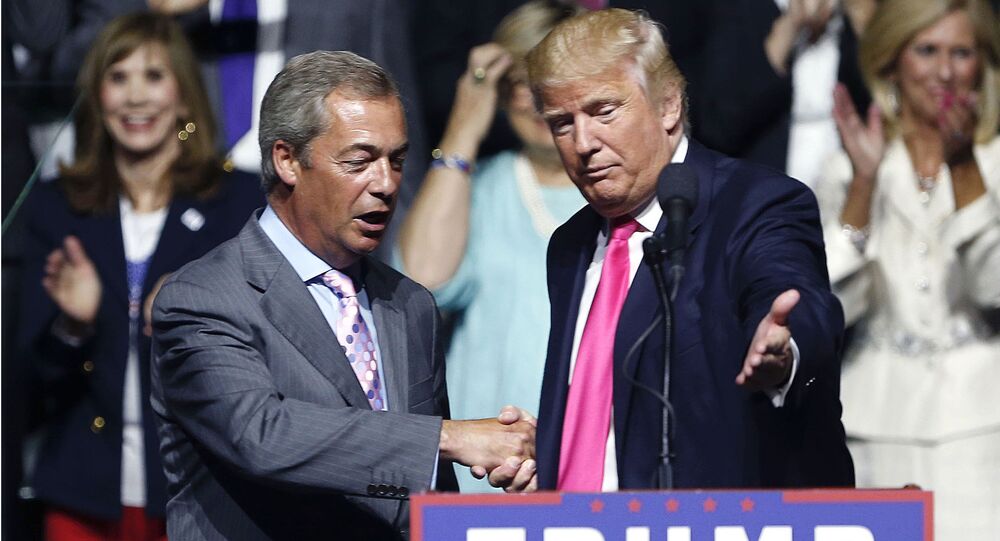 Ambassador Kim Darroch had allegedly suggested that Trump’s career could end in “disgrace and downfall” and called the US administration “clumsy and inept”. The Foreign Office appeared to defend the diplomat by saying that he is paid to be candid with his bosses.

Nigel Farage, a Brexit firebrand and outspoken Donald Trump supporter, has argued that Britain’s envoy to the US Sir Kim Darroch should be sacked in light of sensitive diplomatic cables which show the diplomat’s strong criticism of the American president.

“From the moment Trump was elected this man was the wrong person to be the British ambassador - a globalist in outlook, totally opposed to the Trump doctrine,” Farage told The Daily Mail.

The Brexit Party leader added: “The comments are wholly unsurprising but for him to speculate about Trump's alleged involvement with Russia shows him to be totally unsuitable for the job and the sooner he is gone the better.”

Kim Darroch is totally unsuitable for the job and the sooner he is gone the better. https://t.co/ESiefO3UYm

Nigel Farage and Donald Trump, both of whom have embraced a right-wing agenda, have forged a close relationship. Last month, Trump said the UK government should send Farage to Brussels for Brexit negotiations, while in 2016, the then-president-elect called on London to make Farage its point man for the US (Kim Darroch was also in office back then).

​Not Meant for Public Viewing

In another, he highlighted how Trump’s presidency had been “dogged from day one by stories of vicious infighting and chaos inside the White House, and swamped by scandals – all, one way or another, linked to Russia.”

A two-year FBI-led investigation into the matter found no collusion between the Trump campaign and Russia. The probe led by US Special Counsel Robert Mueller was slammed by Trump as a "witch hunt," while Moscow has repeatedly denied any claims of interference in the US political system.

Following the Darroch leak, the British Foreign Office defended his “honesty”, without naming the ambassador outright.

“The British public would expect our ambassadors to provide ministers with an honest, unvarnished assessment of the politics in their country,” said the statement.

“Their views are not necessarily the views of ministers or indeed the government. But we pay them to be candid. Just as the US Ambassador here will send back his reading of Westminster politics and personalities."

“I wouldn’t pass that sort of very personalised judgement,” he argued.

“I think the thing with diplomatic cables, and I used to work at the Foreign Office, I would be quite careful about what you say which is on a personal basis in those cables because it is all very well talking about the substance of the relationship, the policies, but I think some of that may in retrospect be regarded as unwise.”