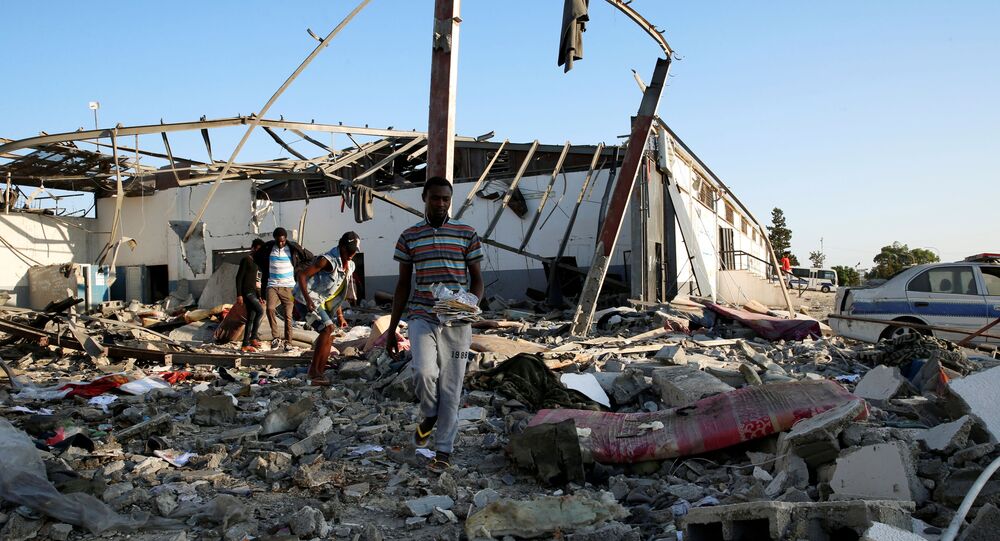 On Tuesday, an airstike against a detention facility for illegal migrants in a suburb of the Libyan capital killed 40 and wounded 80.

The European Union has called for a UN investigation into a Tuesday airstrike on a migrant detention centre in the Libyan capital Tripoli, calling the incident "horrific", according to AFP.

EU diplomatic chief Federica Mogherini, enlargement commissioner Johannes Hahn, and migration commissioner Dimitris Avramopoulos said in a statement that those responsible should be brought to justice.

The airstrike was also condemned by Paris with the French Foreign Ministry demanding an immediate de-escalation and the end to the combat between Haftar's forces and formations backing the GNA.

In the meantime, UN special envoy to Libya Ghassan Salame has denounced the air strike as "a war crime".

Turkey has joined the chorus of condemnation saying that the attack was a crime against humanity.

The Turkish Foreign Ministry called for an immediate investigation into the matter.

© REUTERS / ISMAIL ZITOUNY
A policeman is seen at a detention centre for mainly African migrants that was hit by an airstrike in the Tajoura suburb of the Libyan capital of Tripoli, Libya July 3, 2019

Forty people died and eighty were wounded when late on Tuesday an air strike hit a detention facility for migrants in the Tajoura suburb of the Libyan capital Tripoli.

Since early April, the Libyan National Army (LNA) has been attempting to gain control over Tripoli. The UN-backed Libyan Government of National Accord (GNA) has been waging a counteroffensive to prevent the LNA from taking the city.

Libya has been plagued by strife since longtime ruler Muammar Gaddafi was ousted and subsequently murdered in 2011. As a result, the nation has been torn apart with the eastern part of the country governed by the parliament, backed by the LNA and located in Tobruk, while the GNA, headed by Prime Minister Fayez Sarraj, operates in the country's west and is headquartered in Tripoli.

Thousands of people from the impoverished nation have embarked on a perilous journey across the Mediterranean in hopes of reaching Europe. The European Union made a deal with Libya in 2017 to stop the exodus, but the United Nations warned that many migrants face arbitrary detention and death in the North African country.