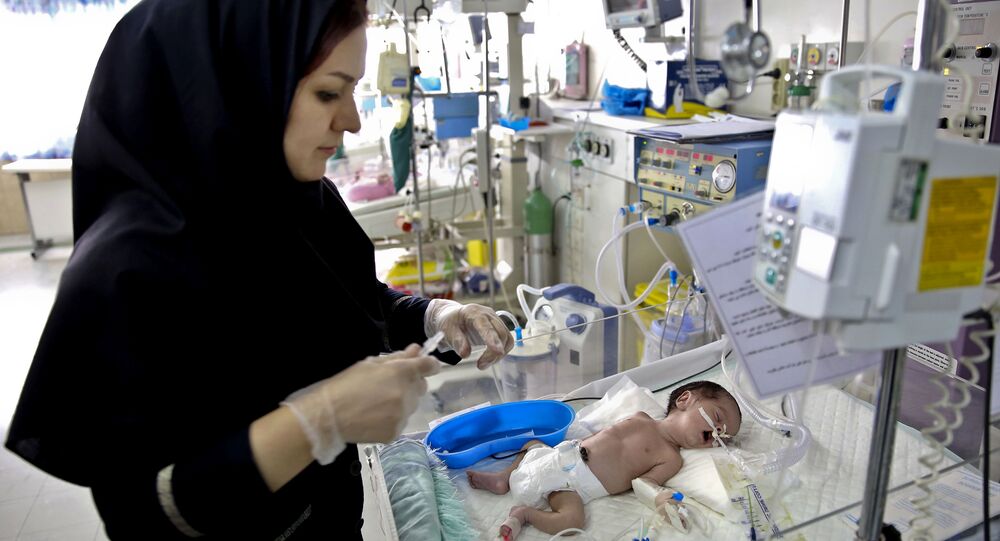 A former health minister for Iran slammed the administration of US President Donald Trump for sanctions which, he says, directly harm Iranian medical capabilities; as well as the EU for its indecision in providing Iran with an effective way to bypass the sanctions and engage in full-fledged trade and financial operations.

Ali-Reza Marandi, head of the Iranian Academy of Medical Sciences, said in a letter to EU High Representative for Foreign Affairs Federica Mogherini, that US sanctions are preventing medical aid from reaching patients in Iran and have led to the deaths of Iranian patients.

“The illegal sanctions, based on evidence and documentation and as stated in the several correspondences that I have had with the UN Secretary-General, have limited access to medicine and vital medical equipment, leading to critical health conditions and the death of many innocent patients,” he wrote, according to an AhlulBayt News Agency (ABNA) report.

Marandi noted that the sanctions had significantly devalued Iranian currency, making it difficult for residents of the nation to buy healthy food and modern medicines.

“The use of brutal sanctions has led to a reduction in the value of the national currency, a decrease in the public's purchasing power, and rising prices. As a result, providing affordable healthy food for many people has become problematic. Therefore, the US-led economic warfare and terrorism has had a direct impact on the health of the community,” he wrote.

Marandi added that Iran has recently been hit with flash flooding, damaging houses. The US sanctions have prevented international financial aid from reaching those affected.

“Major events, such as flooding in parts of our country in recent months, have seriously damaged houses and living conditions for many people, and unfortunately, cruel sanctions have prevented international financial aid and even aid from fellow Iranians abroad to reach the people in need. Meanwhile, soaring summer temperatures increase the risk of an outbreak of contagious diseases among these people,” Marandi wrote.

According to Marandi, who was previously a health minister in the nation, mechanisms that the EU is trying to set up to circumvent US sanctions are not enough to solve the problems. He advocates quickly lifting or ignoring the sanctions.

“What is certain is that the problems related to supplying food and medicine cannot be solved through the utterly inadequate and unreliable mechanisms you intend to create. The entire sanctions regime must be lifted or ignored, our oil exported, and normal banking and financial exchanges resumed in accordance with the nuclear deal in order to resolve these problems,” he wrote.

He underscored that Iranian people suffer under “these barbaric sanctions while the self-proclaimed champions of human rights are silent and complicit.”

Earlier in May, the Academy of Medical Sciences of Iran, in a separate letter to UN Secretary General Antonio Guterres, also complained that the United States' unilateral sanctions against the Iranian nation had significantly affected Iranian medical capabilities. The letter condemned the US for blocking the flow of international humanitarian aid to flood victims in Iran.

In 2018, US President Donald Trump unilaterally abandoned the 2015 nuclear deal with Iran, officially known as the Joint Comprehensive Plan of Action (JCPOA), and re-imposed previously lifted sanctions on Tehran.

Iran has repeatedly stated its adherence to the terms of JCPOA and demanded the EU signatories of the deal to provide Tehran with an effective trading mechanism bypassing US sanctions. Despite European efforts, the proposed measures have not proven its effectiveness yet.

‘We Are in a Position to Do Far Worse’: Trump Warns Iran