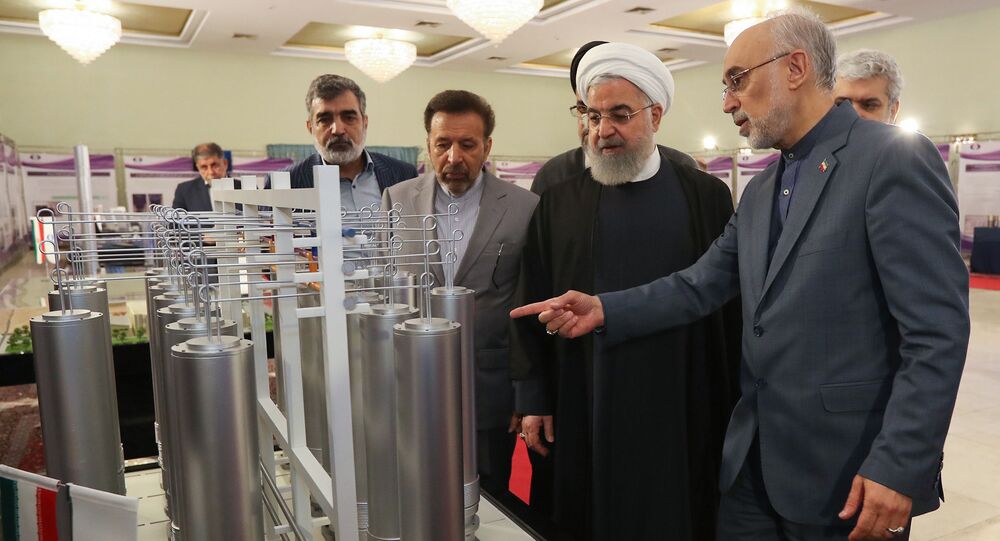 MOSCOW (Sputnik) - Russia is calling on the so-called EU big three to recognise their responsibility for preserving the Joint Comprehensive Plan of Action (JCPOA), including through enabling Iran to sell its oil, Russian Foreign Minister Sergei Lavrov said on Tuesday.

"I would very much like our European colleagues to fully understand their responsibility for preserving the JCPOA. They have very important commitments under this plan, including to ensure Iran's economic interests, enabling it to sell oil and receive revenue, which is an integral component of the agreement", Lavrov stressed.

The minister also noted that Tehran had exceeded its enriched uranium stockpile limits due to US sanctions.

"In order to understand the reasons for what is happening now, it is necessary to see the entire picture. Part of these obligations [under the JCPOA] is voluntary commitments undertaken by Iran to comply with the limits of stockpiles of low-enriched uranium and heavy water. But this is necessarily linked with Iran’s right... to enrich uranium up to 3.67 percent and produce heavy water, and Iran had the right to sell excesses, which was done... until recently", Lavrov said.

‘We Are in a Position to Do Far Worse’: Trump Warns Iran: https://t.co/Av4m5QtteZ

He added that Iran continued to sell surplus stocks of low-enriched uranium to other countries, including Russia, after the United States announced its withdrawal from the Iranian nuclear deal in May 2018.

"But in May this year, the United States adopted a new package of sanctions that prohibited anyone from buying excessive low-enriched uranium and heavy water from Iran. In fact, the United States thereby banned all UN member states from implementing the UN Security Council resolution, which approved the Joint Comprehensive Plan of Action on the Iranian nuclear programme", Lavrov stated.

When the United States withdrew from the JCPOA in 2018 and banned purchasing of Iranian oil, the Europeans pledged to create a mechanism enabling Iran to freely sell its oil, the Russian foreign minister recalled.

The statement comes after Iranian Foreign Ministry Javad Zarif confirmed that the Islamic Republic had stockpiled over 300 kilograms (660 pounds) of enriched uranium.

At the same time, foreign ministry's spokesman Mousavi noted that Tehran's steps to suspend its commitments under the nuclear deal are "reversible", urging European countries to work on the EU Instrument in Support of Trade Exchanges (INSTEX), which had to facilitate trade with Iran in the face of US sanctions.

France, Germany and the United Kingdom said that the mechanism will initially deal with food and medicine, while Tehran has sought oil trade to be included.