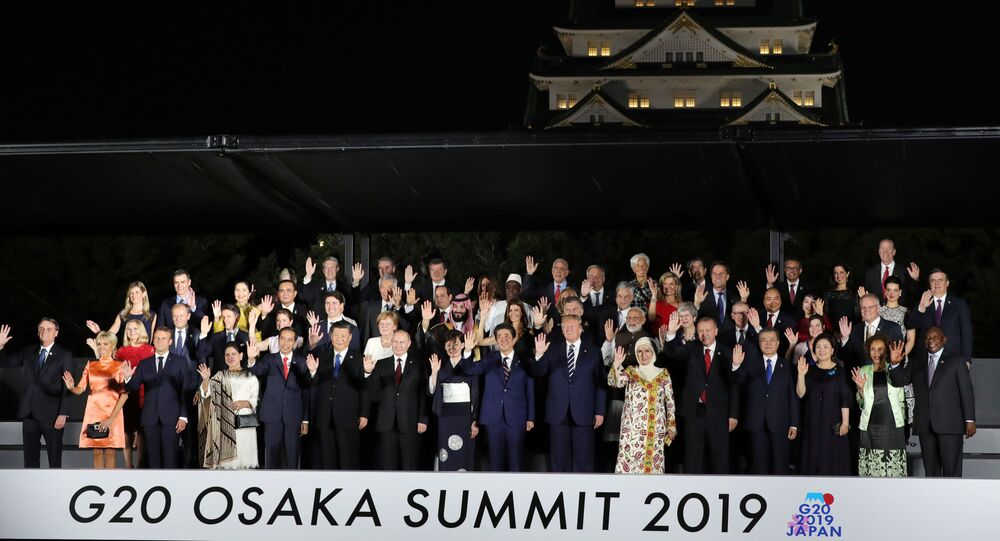 The heads of state of the world's major economic powers packed up and went home Saturday after two days of bilateral talks and plenary sessions dedicated to trade, the global economy, climate change and a series of regional problems in Osaka, Japan. Here's what they managed to get done.

Saturday's long-anticipated meeting between Chinese President Xi Jinping and US President Donald Trump appears to have yielded an informal truce in their year-long multi-billion dollar trade spat, with the agreement undoubtedly one of the highlights of the G20 summit.

According to Chinese media, Xi and Trump agreed to "restart" trade negotiations "on the basis of equality and mutual respect," with the US president saying relations with China were "back on track" and that talks went "probably even better than expected."

"It would be historic if we could do a fair trade deal. We are totally open to it and you are totally open to it," Trump said. Leaving the door open to lifting the ban on Chinese tech giant Huawei, Trump also confirmed that he would not be putting tariffs on the remaining $300 billion worth of Chinese imports not yet subject to restrictions, with the president earlier threatening to do so if a deal could not be reached.

For his part, President Xi emphasised the 'mutually beneficial' nature of trade cooperation between the economic powers, and said that "cooperation and dialogue are better than friction and confrontation."

Russia Ready for a New START

Another of the summit's key meetings took place Friday, when the Russian and US delegations led by Presidents Putin and Trump met for an hour and a half to discuss a range of topics, most pressing of which was the need to extend a key arms reduction treaty between the world's major nuclear powers.

Speaking at the summit's wrap-up press conference on Saturday, Putin confirmed that he and Trump had ordered their foreign ministries to start negotiations on prolonging New START, a key 2010 arms treaty aimed at reducing Russian and US stockpiles and preventing a new nuclear arms race.

Putin said it was too early to draw any conclusions on whether the talks would be effective. But just broaching the matter and the prospect of more talks may be an important first step.

The Russian president had expressed his eagerness to discuss New START with Trump in an interview prior to his arrival at the Osaka summit, warning that with the agreement set expire in just two years, "if we do not begin talks now, it would be over because there would be no time even for formalities."

The New START is now the only major treaty designed to preserve the global strategic balance between the nuclear superpowers, with the US moving to scrap the Intermediate-Range Nuclear Forces Treaty in February and Russia following suit in response.

One of the undoubted media highlights of the Osaka summit was Putin's Friday one-on-one meeting with British Prime Minister Theresa May, with many commenting on the outgoing UK leader's "frosty-looking" visage as the two leaders posed for the cameras before their talks. Among the issues discussed was the Skripal case, an incident which set Russia-UK relations into a tailspin in March 2018 after London accused Moscow of poisoning a former Russian spy in Salisbury, but failed to provide any substantive evidence.

Speaking to reporters at his closing press conference, Putin explained why the talks with May were important, even though she is expected to step down next month. "Was this meeting important or not? I think it was. May is leaving, yes, but today she is the acting head of government, firstly, and secondly, even a small step in the right direction is never for nothing," he said.

© Sputnik / Iliya Pitalev
British Prime Minister Theresa May and Russian President Vladimir Putin take their seats during a meeting on the sidelines of the Group of 20 (G20) leaders summit in Osaka, Japan

The second day of the G20 summit also featured another important subject: the tensions between NATO allies the US and Turkey over Ankara's decision to purchase Russia's S-400 air defence system. In his meeting with Turkish President Recep Tayyip Erdogan, Trump admitted that the US had treated Turkey 'unfairly' (although he said this was his predecessor Barack Obama's fault), and said that the US side would be "looking at" whether or not to move forward with threats to slap sanctions on Ankara if it moved ahead with deliveries of its S-400s.

Finally, despite fears that the Osaka summit could have been left without a final declaration amid threats by French President Emmanuel Macron to block France's signature unless climate issue was addressed in the communique, a compromise was found at the last minute.

Earlier, Macron called the climate issue a "red line" issue for France, with France considering the US' withdrawal from the Paris climate accords unacceptable. However, on Saturday morning, German chancellor Angela Merkel announced that a compromise deal had been reached, with 19 of the 20 heads of state agreeing to back the Paris agreements, while the US carved out an exception for itself under an 'agree to disagree' clause.

In the meantime, French officials reported that the country would be boosting its climate cooperation with China, which together with the United States is the other main contributor to global CO2 emissions.

Putin’s G20 Presser Highlights: Russia Has No Aggressive Intention But Will Mirror Attitude it Faces