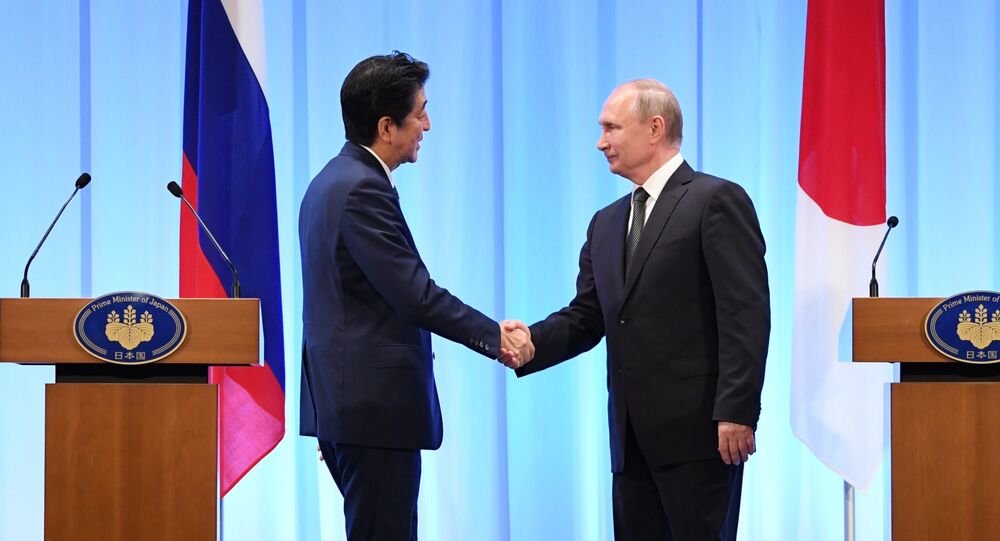 Abe After Talks With Putin: It Is Now More Clear What Issues to Resolve to Sign Peace Deal

Abe noted that the Russian-Japanese peace treaty negotiations had become "unprecedentedly intense" after his talks with Putin in Singapore in November.

"Today, Putin and me frankly exchanged opinions on the negotiations and their prospects. It is not easy to overcome our differences on complicated problems that have not been resolved over the 70 years that have passed after the war. However, it has now become more clear what problems we need to overcome," Abe said.

Russia and Japan are firmly committed to overcoming their differences, the Japanese prime minister stressed.

"Putin and me understand better than anyone else that it is strategically important to strengthen the Japanese-Russian relations, sign the peace treaty and promote this process in every possible way. We need to follow this path," Abe said, noting that he was sure that relations would develop thanks to joint effort.

Both Russia and Japan note progress in their dialogue on the long-awaited peace treaty, Putin said, praising the efforts of the two countries' foreign ministers.

"We have obviously discussed with Mr. Abe the peace treaty problem. We have noted positively that the foreign ministers of the two countries have established a substantive dialogue on this matter, which is quite complicated and sensitive for both countries. The dialogue will continue," Putin said.

The two senior officials said Saturday their countries had moved on considerably from where they were years ago.

"We are witnessing a positive trend in the Japanese-Russian ties across all areas. We have just returned from a closing ceremony of the first Japanese-Russian cross-year in history, which helped us strengthen, expand and re-energize exchanges between our peoples," Abe said at the meeting with Putin.

The prime minister added the two neighbours aimed to increase exchanges to an annual 400,000 people by 2023.

Putin, who is in Osaka for the G20 Summit, agreed there had been "serious progress" in relations between the two countries. He thanked Abe for inviting him to make a separate visit to Japan.

On Possible Joint Activities on Nuclear Energy in Third Countries

Russia is studying the possibility to carry out joint activities with Japan on nuclear energy in third countries, Russian President Vladimir Putin said on Saturday after talks with Japanese Prime Minister Shinzo Abe.

"[Russian state nuclear energy corporation] Rosatom continues the effort on eliminating the consequences of the Fukushima accident. We are also working on a range of initiatives related to reprocessing of spent nuclear fuel and to possible joint activities in third countries," Putin said.

Russia and Japan agreed to start a new project for interregional exchanges that will aim to strengthen cooperation between the two countries, Russian President Vladimir Putin said on Saturday.

"We agreed to launch a new project – the year of the Russian-Japanese interregional and sister-city exchanges," Putin said at a closing ceremony for the cross-years between Russia and Japan.

According to the Russian president, the cross-years brought the people of Russia and Japan closer together in more than 700 cultural, educational, sporting and other events.