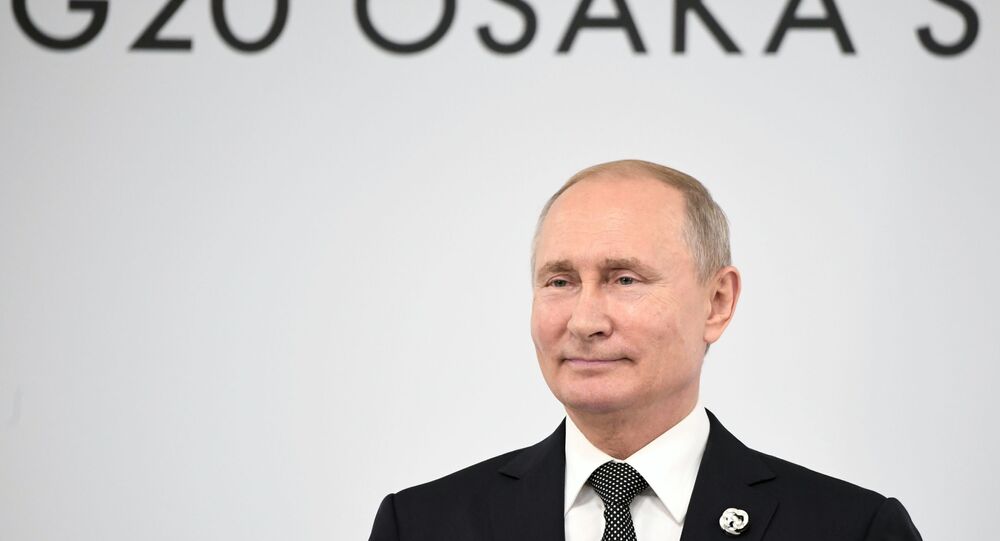 Putin’s G20 Presser Highlights: Russia Has No Aggressive Intention But Will Mirror Attitude it Faces

President Putin met with several world leaders during his two-day visit to Osaka where he arrived to attend the G20 summit. On the first day, Putin held meetings with the US president as well as the French leader and the outgoing UK prime minister. On Saturday, Vladimir Putin sat for talks with his German, Turkish and Egyptian counterparts.

Russian President Vladimir Putin has held his final press conference following the conclusion of the G20 summit in Osaka, Japan on Saturday.

In his interaction with the press, the Russian leader answered a number of questions on the most pressing international issues.

"Yes, we talked about it," Putin said at a press conference, when asked whether Trump said there should not be any meddling in the electoral process.

Touching upon allegations that Russian hacked the US vote, Putin dismissed the claims and noted that the Western nations meddle in Russia's affairs every day, yet Moscow is not hysterical about it.

Addressing the crisis in Syria, President Putin said that Russia is maintaining dialogue with Washington on the issue and coordinating steps on fighting remaining terrorists in the Middle Eastern nation.

“We maintain constant dialogue with our US partners. We have strong contacts on the ground where we are coordinating efforts to fight terrorism. There are still hotbeds there”, Putin told reporters in Osaka, Japan.

The two leaders held a meeting on Friday on the sidelines of the G20 forum in Japan.

Some in the United States accuse Russia of meddling in the 2016 presidential election, but Moscow refutes the allegations, describing them as baseless.

President Putin has stated that Moscow has instructed top diplomats to begin talks on the new Strategic Arms Reduction Treaty. However, the president noted that it was too early to draw any conclusions whether these efforts will help prolong the agreement.

"As for New START, we have ordered foreign ministries of our respective countries to begin consultations. It is too early to tell whether it will help prolong New START", Putin told reporters in Osaka, Japan.

Earlier this year, following the US' withdrawal from the INF treaty, a landmark 1987 accord aimed primarily at reducing the risk of nuclear war in Europe, Moscow voiced concerns that Washington could allow New START to expire in 2021 without renewal, as well.

President Putin also touched upon the infamous Skripal case which was the topic of discussion in his talks with outgoing UK Prime Minister Theresa May at the summit. Putin expressed his hope that Russia-UK relations should not be abandoned over the incident. He stated that he communicated to Theresa May what kind of steps Moscow considers damaging for bilateral relations between Russia and the UK.

In March 2018 former Russian military intelligence officer Sergei Skripal and his daughter Julia were found unconscious on a bench near a shopping centre in Salisbury. Prior to the launch of an investigation into the matter, London claimed they were poisoned with a military-grade nerve agent and accused Moscow of staging the alleged attack.

Moscow has repeatedly refuted all accusations, pointing to the absence of any evidence and London’s rejection of its requests to cooperate in the investigation and grant access to the poisoned Russian citizens.

The Russian leader has stated that preparations for his visit to Riyadh are underway, but it was too early to discuss the agenda of the meeting. At the same time, Putin underscored Moscow's support towards prolonging the OPEC+ deal, stating that Moscow has reached an agreement with Saudi Arabia on this issue. According to Putin, the deal could be extended for six or even nine months.

“As to the forthcoming visit, preparations for it are underway. It is too early to say what issues will be on the agenda”, Putin told reporters at the G20 in Osaka after meeting the Saudi crown prince.

Russia and Saudi Arabia want the OPEC+ deal on oil cuts to be prolonged, President Vladimir Putin said Saturday after meeting the Saudi crown prince on the G20 margins in Japan.

"Indeed we discussed outlooks for extending the OPEC oil cuts. I want to inform you that we reached a consensus. We will extend it, at least we will back the extension — both Russia and Saudi Arabia," he told reporters.

Putin added that Russia did not want deeper cuts and would back the already agreed limits on oil production.

"The length of the extension is still to be decided. It could be six or nine months, possibly six", the Russian president said.

Addressing the conflict in Eastern Ukraine, Putin underlined that all instruments should be employed to settle the crisis.

The Russian president also confirmed that the issue of Ukrainian sailors was raised during his talks with US President Trump. Putin underlined that it was important to wait for the court's verdict in relation to this matter and solve this problem in a calm, working regime. He added that the return of the Russian delegation to PACE had nothing to do with Russia's alleged vow to release the Ukrainian sailors.

"This topic was discussed over the lunch or at our meeting but in any case the US president made it his priority during our talks at the G20," Putin told reporters in Osaka, Japan. "There is no decision yet. There is a trial going on [in Russia]. We should wait for it [the verdict]," he added.

Russian border guards captured three Ukrainian naval ships last November after they entered Russian waters in the Kerch Strait illegally and manoeuvred dangerously. The 22 sailors and two security officers on board were brought to Moscow for trial.

This year, Japan has hosted the two-day G20 meeting in the city of Osaka. The gathering kicked off on Friday and was attended by heads of state and government of the world’s 19 major economies as well as representatives of the European Union, who discussed strategies for fiscal policy and international financial stability, among other issues.