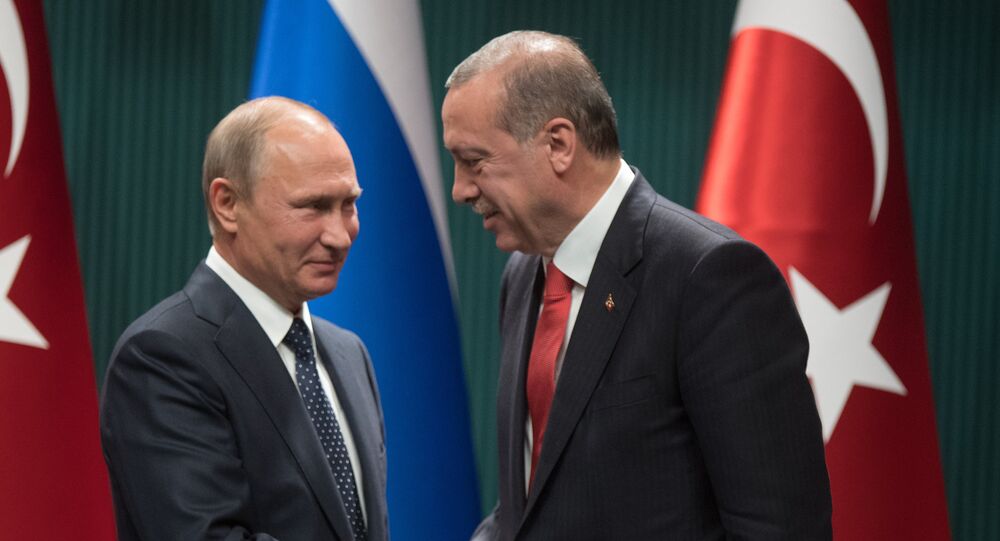 Putin Proposes to Erdogan to Step Up Russian-Turkish Investment Cooperation

OSAKA (Sputnik) – Russian President Vladimir Putin suggested during his meeting with his Turkish counterpart, Recep Tayyip Erdogan, on Saturday, that bilateral investment cooperation should be expanded.

At the beginning of their talks, Putin noted that he was happy to meet with Erdogan again and to discuss the relevant issues with his Turkish counterpart.

"To begin with, I would like to note the increase in trade in 2018 by 16 percent. We both know that there is a rather large amount of investment worth $10 billion on both sides. Now, I believe we should boost it. We are considering the issue of creating an investment platform at 900 million euros [over $1 billion]," Putin said.

Putin recalled that Turkey and Russia were implementing joint projects. Particularly, Ankara would participate as a partner country in the Russian industrial event Innoprom in July, the president explained.

The Russian president continued by noting an increase in bilateral tourist flows.

"Last year, six million tourists from Russia visited Turkey. It is a record high number. Of course, [the tourists] are not miserly. Our tourists know how to relax. The income of our Turkish partners amounted to $5 billion," Putin noted.

Putin also said he believed the large-scale program of Turkish-Russia year of culture and tourism would bring new results in these areas.

Erdogan traditionally began the meeting by greeting Putin and calling the Russian president a "dear friend."

"I would like to note that we have recently given an impetus to Russian-Turkish relations," Erdogan said.

The Turkish president continued by recalling that the next meeting of a joint commission would be held in Turkey.

Erdogan also addressed the implementation of the Akkuyu nuclear power plant project, recalling that it was important to launch the first unit in 2023.

"On the other hand, we believe it is very important that the non-nuclear equipment comes from the Turkish market," Erdogan noted.

The Turkish president also emphasized that the love of Russian tourists for his country gave an additional impetus for the development of the Turkish hospitality industry.

The two leaders met on the sidelines of the ongoing G20 summit in Japan’s Osaka.