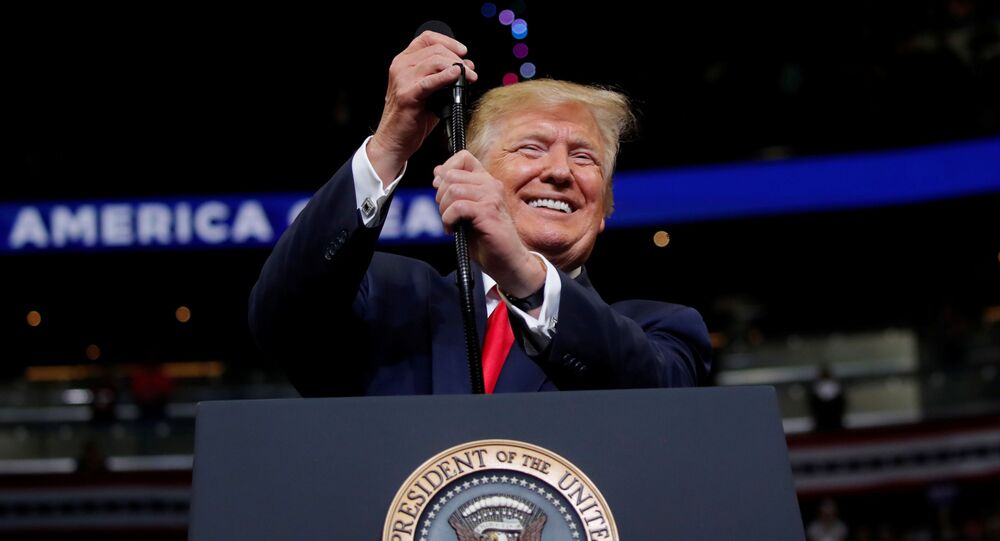 US President Donald Trump tweeted out early Saturday morning from Japan that during his next stop in South Korea, he would like to meet North Korean leader Kim Jong Un at the demilitarized zone "just to shake his hand and say Hello."

"After some very important meetings, including my meeting with President Xi of China, I will be leaving Japan for South Korea (with President Moon)," Trump tweeted. "While there, if Chairman Kim of North Korea sees this, I would meet him at the Border/DMZ just to shake his hand and say Hello(?)!"

Trump and Kim last met in Hanoi, Vietnam, at a peace summit that ended without a deal. Kim insisted that Trump lower some of the economic sanctions against the Democratic People's Republic of Korea (DPRK) before he would proceed further with his denuclearization program. The US refused to budge, maintaining it wouldn't remove any sanctions until irreversible and verifiable destruction of DPRK's nuclear weapons and ballistic missile programs was under way.​

Both in Hanoi and at their first summit in Singapore in June 2018, Kim and Trump reportedly got along famously. However, Pyongyang warned earlier this week that time was running out to restart negotiations, and has protested Trump's primary negotiator, Secretary of State Mike Pompeo, as not being "mature" enough to handle the delicate task of negotiating with the socialist state, with whom the US is technically still at war.

In 1953, the Korean War ended without a permanent peace treaty, but rather only a ceasefire. The DMZ, where Trump wants to meet Kim, is the no-man's-land separating the socialist North from the capitalist South, a heavily fortified zone emblematic of the standoff between the two sides.

In that war, the US took the side of the South and the Chinese took the side of the North. Earlier this month, Chinese President Xi Jinping, with whom Trump met at the G20 summit in Osaka, Japan, this past week, also paid a visit to Kim to celebrate 70 years of friendship between their two countries. Xi also pledged total support for developing stronger relations with Kim, regardless of the international situation. However, Beijing has also been part of the six-party talks in the past aimed at achieving a solution to the standoff with Pyongyang, alongside the US, Russia, Japan, and South Korea.

© REUTERS / KCNA
Tick Tock: Pyongyang Warns Time is Running Out For Denuclearization Deal with US

Since early 2018, the two Koreas have taken unprecedented steps toward reconciliation, even going so far as to sign an end-of-war declaration in September 2018, although a permanent peace would require the US as well. Seoul and Pyongyang also relaxed tensions along the DMZ and opened some travel between the countries, including for tourism, business purposes, and the reconciliation of families divided by the war and subsequent cold peace.