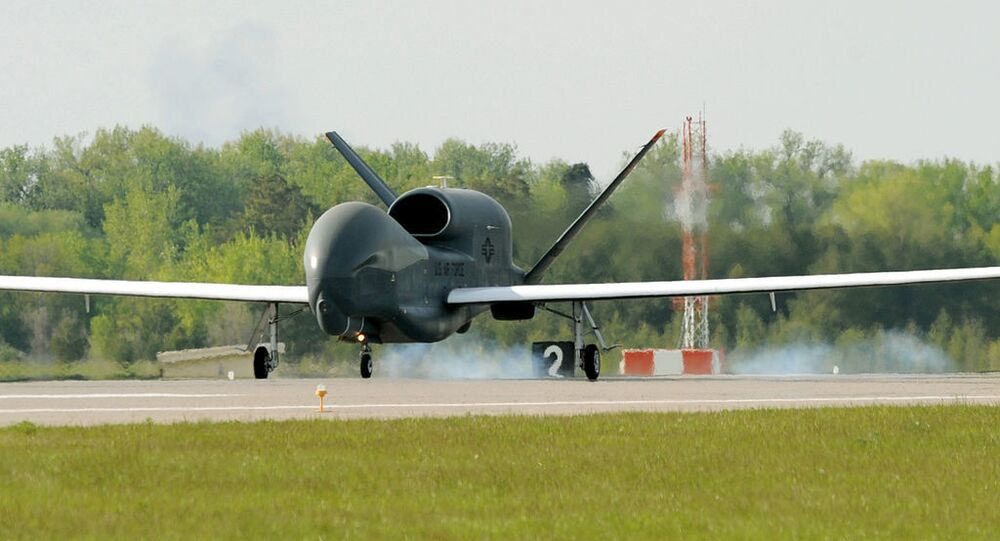 On 20 June, Iran said that it had downed a US surveillance drone flying over Hormozgan Province after it violated the country's airspace. The US Central Command claimed, in turn, that the drone was shot down while operating over international waters in the Strait of Hormuz.

Iran has formally lodged a complaint to the UN in connection with its airspace's violation by a US unmanned aerial vehicle earlier this month, the semi-official Tasnim news agency reports.

“The complaint was filed to the UN Security Council over the aggression against our airspace by the American drone. […] The complaint states that Tehran reserves the right to respond firmly if the US repeats the violation," Iranian Deputy Foreign Minister Gholamhossein Dehghani was quoted by Tasnim as saying.

The move comes after the Iranian Islamic Revolutionary Guard Corps (IRGC) said last week that that they had brought down a US Northrop Grumman RQ-4 Global Hawk surveillance drone flying over the coastal Hormozgan Province because it violated the country's airspace.

The US Central Command has, for its part, said that the unmanned aerial vehicle was hit while operating over international waters in the Strait of Hormuz.

IRGC Commander-in-Chief, Major General Hossein Salami, said that the downing of the drone was a "clear message" to Washington that Tehran would "react strongly" to any aggression.

Ali Larijani, speaker of Iran's parliament, for his part, warned that the US military will get an even "stronger" response if it dares to violate Iran's borders.

"The downing of the American drone was an experience for them not to violate our borders. But, if they do it, the Armed Forces will give them a stronger reaction," Larijani said, as quoted by PressTV.

The incident further exacerbated already strained ties between Iran and the US , with President Donald Trump taking to the Twitter shortly after to announce that he halted a military strike against three sites in Iran 10 minutes before it was set to be carried out upon learning that some 150 Iranians would die in the attack.

Earlier, the United States boosted its military presence in the Persian Gulf in what US National Security Adviser John Bolton said was "a clear and unmistakable signal to the Iranian regime that any attack on the interests of the United States or [its] allies will be met with ruthless force."

At the same time, US President Donald Trump has said that he hopes to avoid a war with Iran. Iranian Supreme Leader Ayatollah Ali Khamenei also said that Iran does not intend to wage war with the US but will continue to resist its pressure.

Tensions between Tehran and Washington have been simmering since Trump announced the US’ withdrawal from the 2015 Iran nuclear deal in May 2018, also saying that he would reinstate harsh economic sanctions against Iran. A year later, the Islamic Republic signalled that it is suspending some of its obligations under the Iran deal.