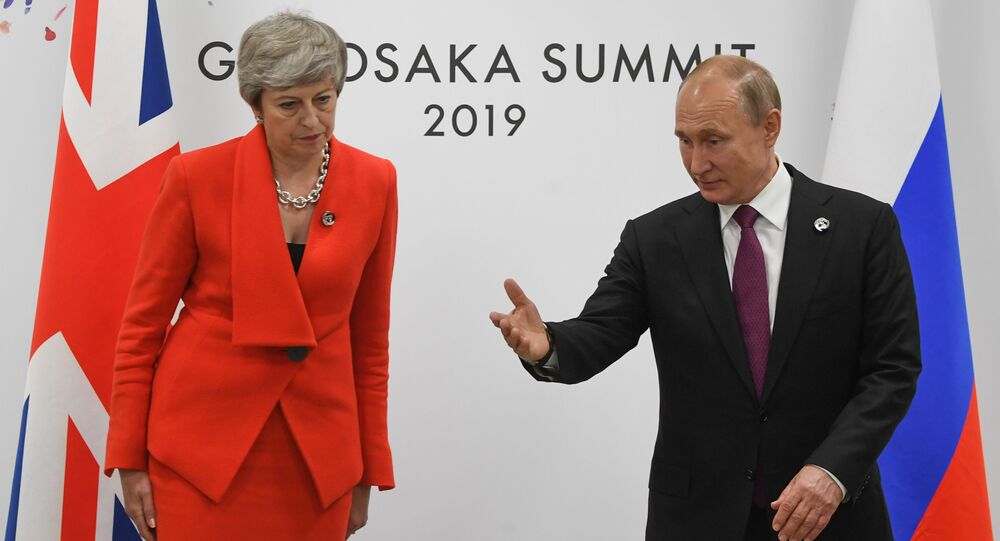 MOSCOW (Sputnik) - Russian President Vladimir Putin held a meeting on Friday with outgoing UK Prime Minister Theresa May on the sidelines of the Group of 20 (G20) summit in Japan.

President Putin and Prime Minister Theresa May have discussed the poisoning of former Russian spy Sergei Skripal and his daughter in the United Kingdom last March, among other issues, Kremlin spokesman Dmitry Peskov said.

"It was a meeting after a long break, it began in a one-on-one format, in the presence of interpreters only. In this format, [Prime] Minister May was talking about the Skripal case, she raised this issue. [May] received the necessary answers from the Russian president," Peskov said, adding that the two leaders had also exchanged views on Ukraine, Syria and Iran.

Peskov added that the two leaders had demonstrated that both countries understood the need to revive bilateral relations to promote business cooperation.

"The issues of bilateral trade, trade and economic relations were later touched upon [during a meeting in] an extended format. There is an understanding of the need to work out a format for reviving this interaction in the interests of the two countries' business", the spokesman said.

The talks come as Theresa May is set to step down from her post in July after she announced her resignation last month over the defeat to her Brexit deal in the parliament.

The outgoing Prime Minister's Administration has been in forefront of accusing Moscow in being responsible for the poisoning of the Skripals.

In March 2018 former Russian military intelligence officer Sergei Skripal and his daughter Julia were found unconscious on a bench near a shopping centre in Salisbury. Prior to the launch of an investigation into the matter, London claimed they were poisoned with a military-grade nerve agent and accused Moscow of staging the alleged attack.

Moscow has repeatedly refuted all accusations pointing to the absence of any evidence and London’s rejection of its requests to cooperate in the investigation and grant access to the poisoned Russian citizens.