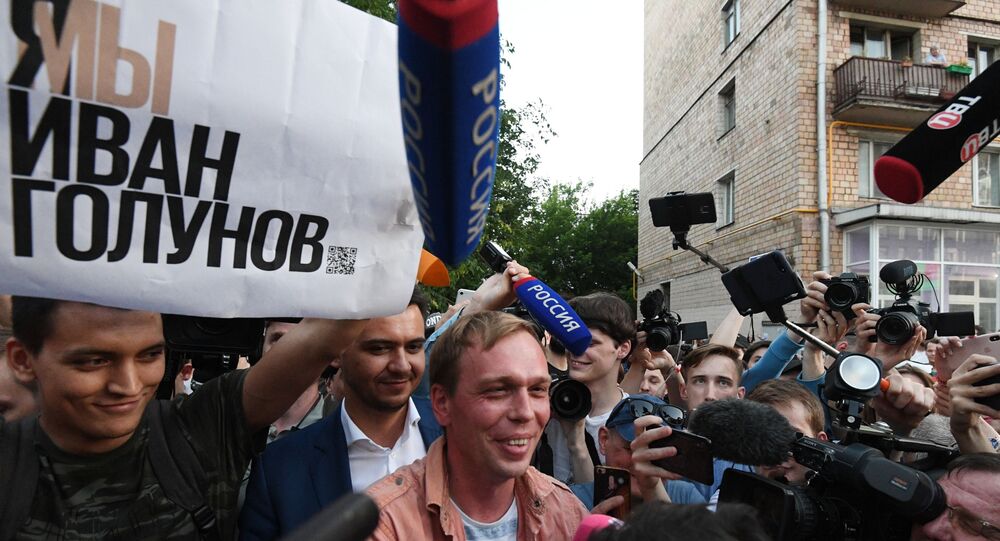 GENEVA (Sputnik) - UN Special Rapporteur on Torture Nils Melzer voiced his concern over the fact that while some of the Russian media outlets joined their efforts to draw public attention to the controversial arrest of investigative journalist Ivan Golunov, Western media failed to report impartially on the case of WikiLeaks founder Julian Assange.

"When I see that in Russia, with the Golunov case, three main newspapers can get together and launch a campaign and achieve the result that the government releases the journalist, and actually even fires some of the corrupt officials involved in this case; and then I see in the West that we can't even get the media to report about facts that are actually crucial for their own survival as independent press agencies, that really extremely concerns me", Melzer told reporters.

The UN rapporteur also expressed his concern about the fact that some of the world's most well-known western media outlets and news agencies, including The Guardian, The Times, the Financial Times, The New York Times, The Washington Post and Reuters, among others had refused to publish his opinion piece on Assange's torture.

"I got either no response, or negative response, and sometimes 'oh well, this is just not timely right now' or 'this is not high on the news agenda' or 'this is not precisely what we are interested in.' I have also offered to participate in a debate, in a 'hard talk' on BBC, I said: look, you do not have to agree with my assessment, but you can ask me all the uncomfortable questions you want, a hard talk. But I will ask you as BBC uncomfortable questions as well. They refused. So this is really worrying", Melzer added.

Melzer ended up publishing his piece on Assange on the Medium platform, detailing what he described as psychological torture against the whistleblower. According to the UN rapporteur, the WikiLeaks founder had been repeatedly subject to slander in an attempt to divert public's attention from the crimes that he had helped to expose.

When asked to comment on the case of killed Saudi-born columnist Jamal Khashoggi, the UN official warned that public's inaction in that situation would have dire consequences in the future.

"If the public doesn't wake up soon, we are going to have a lot more of these cases", Melzer said.

After Golunov's detention, three leading Russian newspapers issued a joint statement under the same headline for the first time ever, voicing their concern over Golunov's case and saying that his detention might have been linked to his journalistic work.

Reacting to the incident, Russian President Vladimir Putin has dismissed two police generals in connection with the case, including the one who headed the police department responsible for Golunov's arrest.

Golunov, who is known to have covered corruption-related stories, was arrested in Moscow on 6 June after police found drugs in his possession. More narcotics were later discovered in his apartment. The journalist has maintained that the illegal substances had been planted on him in retaliation for his investigative work. Golunov was placed under house arrest, but amid a rising public backlash against the case the journalist was released, and all charges were dropped over lack of evidence against him.

Assange, in turn, was arrested in London in April for violating his bail conditions in 2012, when he took refuge inside the Ecuadorian embassy in the UK capital to avoid extradition to Sweden on sexual assault charges, and is currently serving a prison term in a London jail.