The Conservative Party has been torn apart by the row over Brexit with large numbers of Tory voters deserting them to vote for the Brexit Party in the European elections last month. But what about the Opposition? Brexit is also hugely divisive for the Labour Party.

Labour Party leader Jeremy Corbyn met trade union leaders on Monday, 24 June, after promising the Shadow Cabinet he would consult about possibly changing the party’s position on Brexit before bringing the matter back to the National Executive Committee on Tuesday, 25 June.

Mr Corbyn has been accused of a lack of clarity when it comes to the party’s position on Brexit and last month’s European elections saw flocks of Remainer Labour voters switching to the Liberal Democrats and the Greens, who are both avowedly against leaving the European Union.

Outrageous. @UKLabour need to get off the fence.

Until they do, millions of Remainers will keep voting for real #StopBrexit parties. https://t.co/sFQS931aKM

​The Deputy Leader, Tom Watson, has come out in favour of going “full Remain”.

In an email to Labour Party members on Saturday, 22 June, Mr Watson said: “In the last few days I have been making the case for Labour to come out as an explicitly pro-Remain, pro-reform party…we will have the opportunity this coming week at Shadow Cabinet to take the historic decision to campaign to remain in the EU. 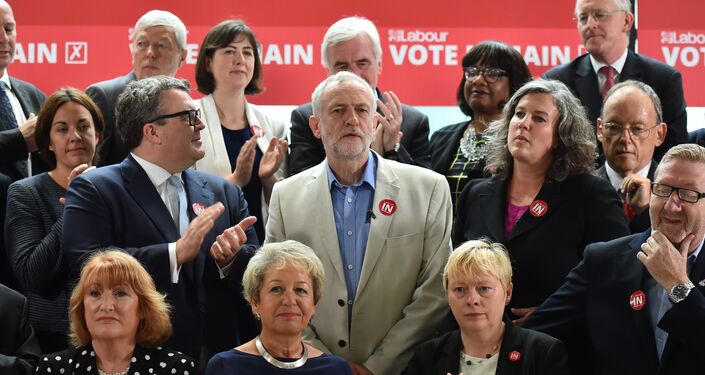 © AFP 2020 / BEN STANSALL
Leader of the British opposition Labour Party, Jeremy Corbyn (C), smiles as he poses with members of the shadow cabinet including Deputy leader Tom Watson (CL) and Shadow Health Secretary Heidi Alexander (CR), Labour Party and TUC members during a photocall for the 'Labour In for Britain' campaign in London, on June 14, 2016 calling for a remain vote in the EU referendum

Mr Watson wants an emergency vote or a special conference to authorise a change in policy before the summer and has said the matter cannot be left until the party’s annual conference in September as that will be too close to the European Union’s 31 October deadline.

But there is a strong lobby within Labour who are dead set against the party switching to a “full remain” setting.

Party chairman Ian Lavery and Shadow Cabinet Office Minister Jon Trickett fear permanently losing millions of traditional Labour voters in constituencies in the Midlands and the North of England which voted for Leave in 2016 and voted in large numbers for the Brexit Party this year.

Only 39% of Union members say they will vote Labour. @labour need to wake up and smell the#brexit #Remain coffee. And soon. https://t.co/ct5cM1GKrc

​A total of 26 Labour MPs in Leave-voting areas have written an open letter to Mr Corbyn, urging him to resist the demands from Remainers, especially in London and in key university towns, to switch to a “full Remain” stance.

In the letter they wrote: “The strength of the Brexit Party in Labour heartland areas in the European elections revealed a much more potent threat than either the Liberals or Greens present. The Peterborough by-election result, with Labour’s vote share down 17 percent, and the Brexit Party coming so close, gives a stark warning of what could happen in Tory-Labour marginals, the majority of which are Leave seats.”

This is the full letter from ⁦@UKLabour⁩ MPs in leave areas to ⁦@jeremycorbyn⁩ opposing a decisive shift to a referendum and remain pic.twitter.com/JI66YFXbiM

​They pointed out Labour activists on the doorstep were telling voters in Peterborough “that Brexit will not be stopped” by Labour and they argued this was part of the reason why the party managed to hold off the challenge of the Brexit Party.

The letter, signed by former ministers and shadow ministers including Lisa Nandy, Caroline Flint and Sarah Champion, went on: “A commitment to a second referendum would be toxic to our bedrock Labour voters, driving a wedge between them and our Party, jeopardising our role as a party of the whole nation, and giving the populist right an even greater platform in our heartlands.” 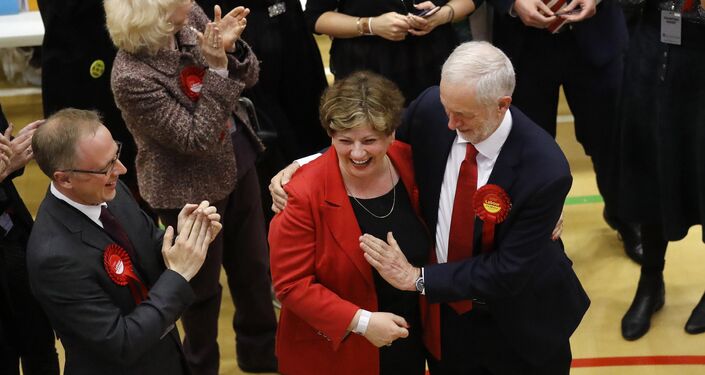 But Unite issued a statement saying: "Polls that profess to speak for our members yet are not conducted by our union cannot be considered credible.”

Mr Corbyn has repeatedly said he wants to honour the 2016 Brexit referendum and on the Labour Party’s website it says: “Labour’s priority is to get the best Brexit deal for jobs and living standards, to underpin our plans to upgrade the community and invest in every community and region.”

Labour’s room to manouevre has been restricted by the European Union, which has repeatedly said it will not reopen the Brexit negotiation even if a different party were to come to power in Britain.

That means that the options available are only Theresa May’s deal, a no-deal Brexit or a complete U-turn to campaign to stay in the EU.

Whereas half of the Conservative Party actively want a no-deal Brexit, very few Labour supporters do, which means they are left with a difficult choice.