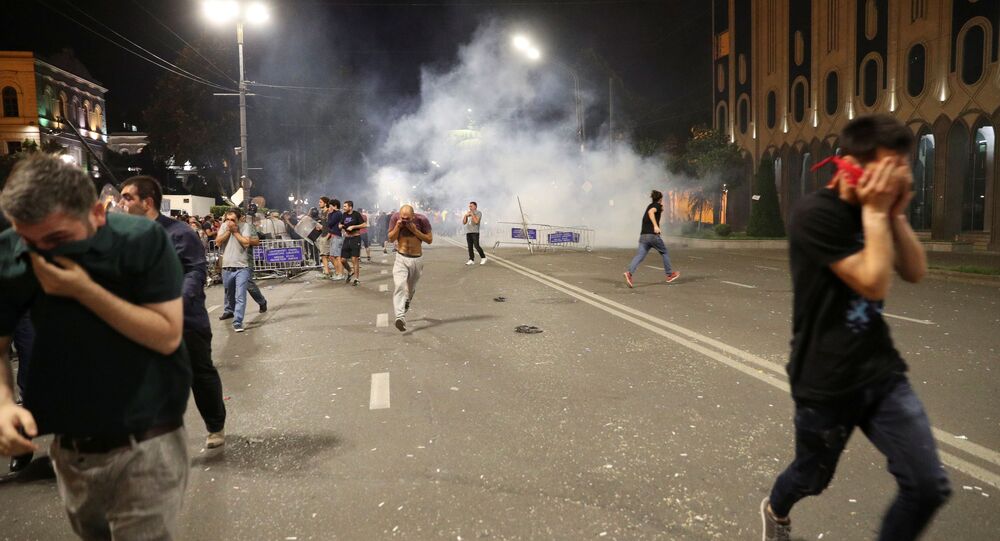 TBILISI (Sputnik) – Georgian President Salome Zourabichvili carried out a meeting with the diplomatic representatives of several western countries to discuss the ongoing Tbilisi unrest, according to an official statement.

"At the meeting, the president said that she was ready to partner with all political forces which do not call for the stabilization in order to stabilize the situation", the statement read.

Zourabichvili said that Georgia was a stable regional force, noting that "it is not difficult to figure out who benefits from the tense developments and destabilization".

At the presidential palace on Friday, Zourabichvili received high-ranking diplomats from the embassies of the United States, the European Union, Germany, the United Kingdom, France, Italy, the Netherlands, Poland, Bulgaria, Estonia and Lithuania.

Georgian Prime Minister Mamuka Bakhtadze said in a statement that the unrest was triggered by "destructive political forces who overstepped the constitutional boundaries", blaming "the revanchist opposition" for the violent protests in Tbilisi.

"The assault on the Parliament and police was led by destructive political forces once again taking advantage of our fellow citizens' honest emotions", Bakhtadze stated.

Protests in Georgia erupted on Thursday over the participation of a Russian delegation in an international parliamentary forum in Tbilisi. The UK, EU and German embassies have called for an end to the unrest in Georgia.

Zourabichvili described Russia as an "enemy", accusing Moscow of sowing division inside Georgia. Russian Prime Minister Dmitry Medvedev called Zourabichvili’s statement unprofessional, suggesting that she was either not fully briefed on the situation or had deliberately misinterpreted it.

The Russian Foreign Ministry said that Moscow was outraged by the actions of protesters disrupting the interparliamentary meeting in Tbilisi.

The Russian lower house speaker, Vyacheslav Volodin, noted that the actions of the Georgian leadership during the forum violated norms for holding international events.