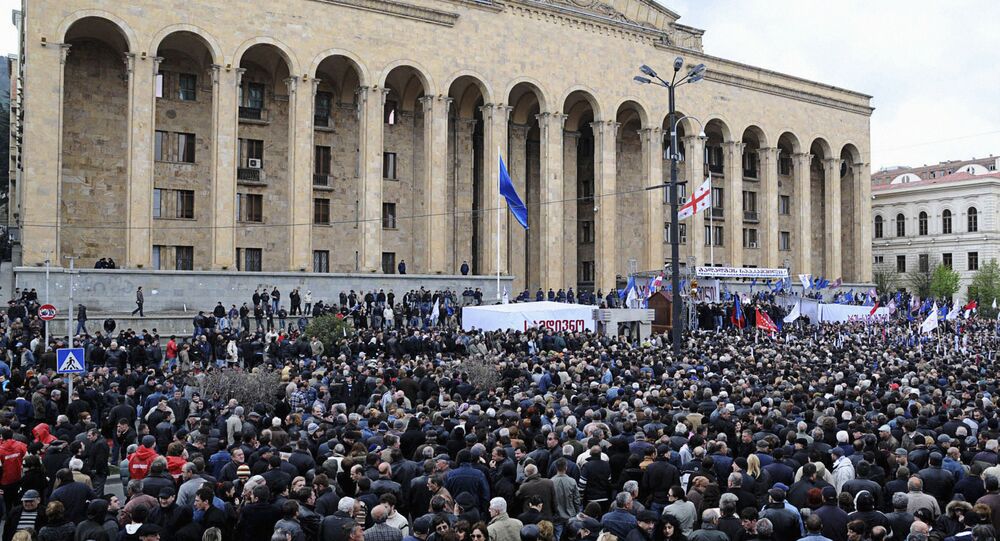 TBILISI (Sputnik) - Protesters rallying in front of the Georgian parliament in Tbilisi on Friday evening are preventing members of opposition parties from joining the rallies, arguing that their peaceful demonstration should not be politicized, according to local media.

"We will not allow our peaceful protest to turn into a political demonstration and violence once again", one of the protesters said.

Earlier in the day, the Georgian opposition said that it would still hold a demonstration near parliament even after the speaker's resignation amid protests. The opposition parties demand the resignation of Interior Minister Giorgi Gakharia and snap elections.

The leader of the opposition party Movement for Liberty — European Georgia, Giorgi Ugulava, arrived at the protest site, but demonstrators threw eggs and bottles at him, forcing the politician to leave.

Grigol Vashadze, the leader of the United National Movement opposition party, came to the demonstration as well, but while he was giving a speech protesters started shouting "Go away!" and clapped.

The first protests erupted in the Georgian capital on Thursday after the Russian head of the General Assembly of the Interparliamentary Assembly on Orthodoxy, which was heaving a meeting in the parliament hall, addressed the audience from the speaker's seat.

Radicals then tried to storm the parliament building, demanding the resignation of parliament speaker and other officials.

Meanwhile, Georgian students gathered in the courtyard of the Tbilisi State University have refused to go to the parliament building and have joined a planned opposition rally in order to avoid helping the opposition make political gains.

Students say they are not able to protest without the participation of opposition forces and that this makes peaceful rallies turn into politically-motivated unrest.

"We are not going to take part in political demonstrations. Our protests concern the future of Georgia, not the opposition", one of the students said.

The Georgian Health Ministry estimates that 240 people were injured in clashes with police. Over 300 protesters were arrested. Parliamentary Speaker Irakli Kobakhidze has resigned.