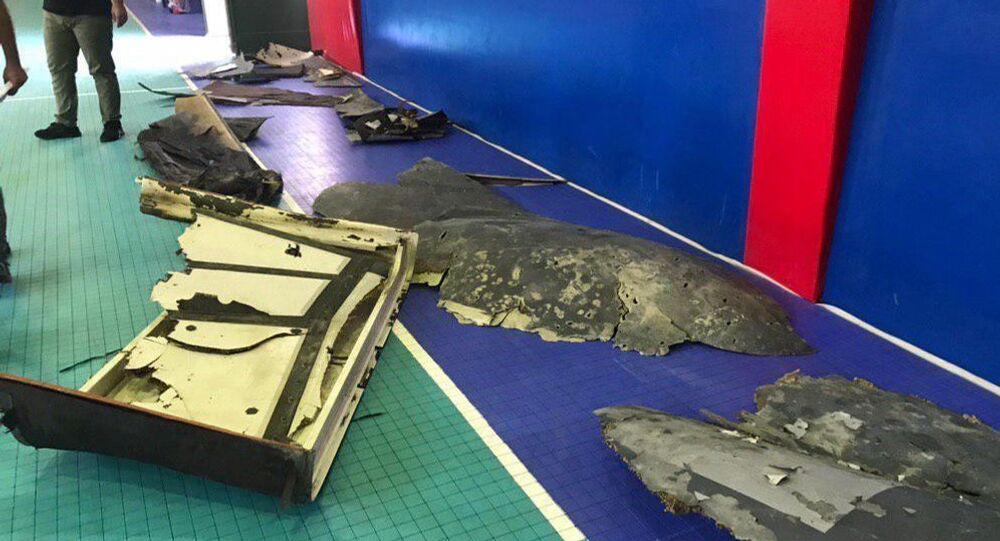 Tehran claims that its forces shot down a US drone that was engaged in spy operations in Iran's airspace, while Washington insists that the aircraft was operating over international waters.

Iran's state-run news agency IRIB has published what it is calling the first photos of the remains of the US surveillance drone downed by the Iranian military on Wednesday night.

The images show what appears to be the skin of the RQ-4 Global Hawk American spy drone.

While the US Central Command has confirmed that this model of the drone was the one destroyed by Iranians, Washington and Tehran disagree over where it was brought down.

#Iran releases first photos of debris of US #GlobalHawk #RQ4 spy drone shot down by Iranian missile over its airspace in #seaofoman. pic.twitter.com/nnEjyDX2KG

The US military insists that it was minding its own business in international airspace over the Strait of Hormuz and did not violate Iran's borders.

According to Tehran's account, however, the Islamic Revolutionary Guard Corps' aerospace force downed the aircraft with a surface-to-air missile while it was flying in stealth mode over the southern province of Hormozgan.

Gen. Amirali Hajizadeh, the head of the aerospace force, said on Iranian TV that the debris was proof that the drone was flying over Iranian territorial waters when it was brought down.

He added that they had had warned the drone several times before firing the missile, but it didn't respond.

Major General Hossein Salami, the Revolutionary Guards' commander-in-chief, stated that the drone was downed to send a "clear message to America" that Tehran would "react strongly" to any aggression.

Iran went on to file a compaint with the United Nations, accusing the US of provocation.

US President Donald Trump initially described the incident as a "big mistake" on Iran's part, but later downplayed the attack, despite reports that a military strike against Iran was on the table.

“I would imagine it was a general or somebody that made a mistake in shooting that drone down," he told journalists on Thursday.

“I find it hard to believe it was intentional, if you want to know the truth. I think it could have been somebody who was loose and stupid that did it,” he added. “It was a very foolish move.”

Tensions have spiked in the region over the past several weeks after a number of oil tankers have been attacked in the Gulf of Oman.

The United States and the UK, which carried out its own intelligence assessment, were quick to blame Iran for orchestrating the attacks, with Tehran denying allegations.

Moreover, the US has accused Iran of a failed attempt to down one of its drones last week, prior to the alleged attack on tankers in the Gulf of Oman.