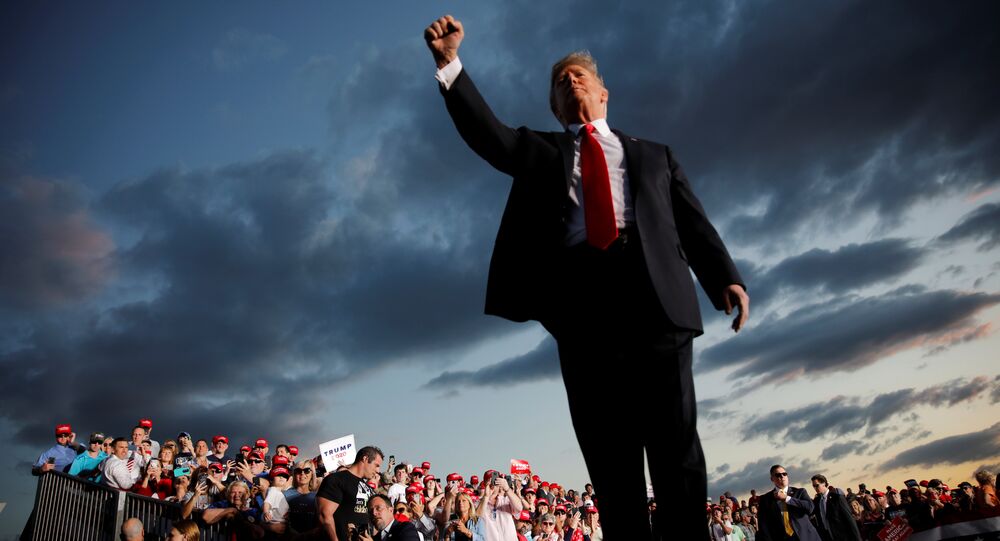 US President Donald Trump has tweeted an ominous and ambiguous six-word message in what may be an acknowledgement that a US drone was downed in Iran, with the tweet simply reading "Iran made a very big mistake!"

Trump has yet to clarify what he meant at the time of this writing, but it may be a confirmation of Iran's earlier claims that it shot down a RQ-4 Global Hawk as it crossed into Iran's borders over Hormuzgan Province.

Later, asked by reporters about how the US would respond to the drone shootdown, Trump said "You'll find out." without offering any more details.

According to Trump, the drone was shot down over international waters, not Iranian territory. The president said he remained willing to talk with Iran.

Earlier, an unnamed US official told Reuters that a Navy MQ-4C Triton drone had been shot down by an Iranian surface-to-air missile, with the official claiming the shoot down took place over international airspace over the Strait of Hormuz. The IRGC claims the drone in question was a Northrop Grumman RQ-4, and said it was shot down over Iranian territory.

IRGC commander in chief Maj. Gen. Hossein Salami said the downed drone was a "clear message to America," stressing that although Iran was "not seeking war with any country," it was "fully prepared to defend" the country from foreign aggression.

The US Central Command later confirmed that a US Navy "Broad Area Maritime Surveillance (or BAMS-D) ISR aircraft" was shot down, with the incident said to have taken place just before midnight on Wednesday night.

The drone incident is the latest escalation in tensions between the US and Iran following last week's apparent sabotage attacks against two oil tankers in the Gulf of Oman, which the US immediately blamed on Tehran. That attack was preceded by a separate reported sabotage attack on four tankers off the coast of the United Arab Emirates in mid-May. In early May, the US announced that it would deploy a carrier strike group to the Middle East amid intelligence about the threat of 'imminent' attacks against US interests in the region. The carrier group has since been complemented by fighters, strategic bombers, thousands of troops, Patriot missile batteries and at least one amphibious landing ship. Tehran has dismissed Washington's claims about its alleged involvement in the tanker attacks and accused the US and its Saudi, Emirati and Israeli allies of engaging in "sabotage diplomacy" aimed at "cover[ing] up its economic terrorism" against Tehran.

US-Iran tensions began the slide to their lowest point in decades in May 2018, when President Trump unilaterally withdrew the US from the multi-nation Joint Comprehensive Plan of Action (JCPOA) nuclear treaty and began slapping Iran with tough energy and banking sanctions. In May 2019, the US Treasury allowed sanctions exemptions for over half a dozen major purchasers of Iranian oil to expire, prompting Iran to announce that it would withdraw from some of its voluntary commitments under the nuclear deal. Iran maintains that it harbours no ambitions to pursue a nuclear weapon.

Russia and China, as well as US allies Germany, France and Japan have urged restraint. On Thursday, commenting on the US announcement that it would be sending another 1,000 troops to the Middle East, Russian Deputy Foreign Minister Sergei Ryabkov accused the US of "flexing its muscles" against Iran, stressing that the country continues to abide by its obligations under the JCPOA. Ryabkov called on those seeking to to stoke regional tensions to "stop" before "it's too late."