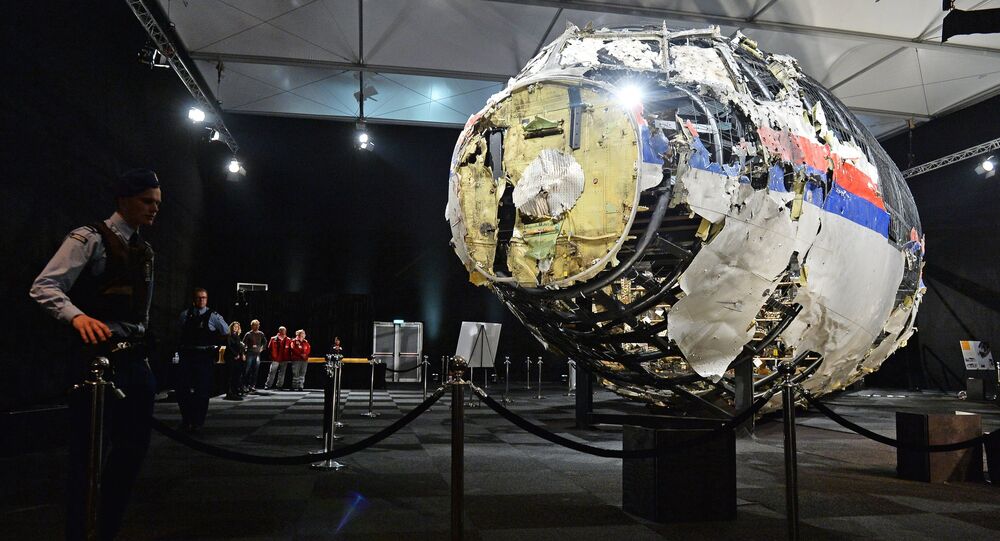 The Joint Investigation Team (JIT) that is conducting a probe into the crash announced on 18 June the names of four people, three Russians and one Ukrainian, suspected of being involved in the incident, in which 298 people were killed.

Russian President Vladimir Putin told journalists that Russia is not satisfied with the conclusions of the international investigators on the downing of Flight MH17 after his annual Q&A session.

“Should we return all the same to what we talked about? Who allowed flights over the combat zone? Russia? No. Where were the fighters? And where is the absolute evidence that the militia shot or someone else? There are a lot of questions, but they are not answered. They just chose once and for all, they appointed the perpetrators and that's it. We are not satisfied with this approach to the investigation", he said.

Russia has its own version of events related to the MH17 crash, but no one listens, Putin stated.

"We have our own version, we presented it, unfortunately, no one wants to listen to us. And until there is a real dialogue, we will not find the right answer to those questions that are still open", Putin told reporters.

According to the president, there are many questions about the MH17 crash, but nobody is answering them - the West simply just appointed a culprit.

"Russia has never shied away from its responsibility if such a burden is on its shoulders. What we have seen and what we have been presented with as evidence of Russia's guilt is absolutely not an option for us, we believe that there is no evidence there", Putin said, answering a question on the MH17 crash.

The statement comes after the JIT announced names of the suspects involved in the incident.

Reacting to the announcement, the Russian Foreign Ministry has called the accusations against Russia in the MH17 case "ungrounded".

MH17 was a scheduled passenger flight from Amsterdam to Kuala Lumpur that crashed on 17 July 2014 in eastern Ukraine, leaving no survivors. Kiev and the self-proclaimed republics in the southeast of Ukraine have blamed each other for the downing of the Malaysia Airlines plane.

The Dutch-led JIT's probe concluded that the plane was shot down by a Buk missile, which apparently came from the 53rd Anti-Aircraft Missile Brigade of the Russian Armed Forces, based near the Russian city of Kursk. The Russian Foreign Ministry strongly refuted the conclusions as groundless and called the investigation "biased".

After conducting its own investigation with the participation of Almaz-Antey, the defence firm which produced the Buk missile system, Moscow stated that it had provided the JIT with evidence proving that it was a Ukrainian Buk systems that hit the Boeing, adding that the information was ignored by the investigators.

© REUTERS / Maxim Zmeyev
A member of self-defense unit stands at the crash site of Malaysia Airlines flight MH17, near the village of Hrabove (Grabovo) in Donetsk region, Ukraine. (File)

Moscow has repeatedly dismissed the JIT's allegations of playing any role in the MH17 crash. Russian President Vladimir Putin previously stated that Russia has not been given access to the investigation, adding that Moscow would be able to recognise its results only if it is part of the probe. Moreover, the Kremlin said it presented evidence which proved that the missile belonged to the Ukrainian military, but the investigators weren't interested.

In turn, the Russian Defence Ministry noted that in 2011, the Russian authorities disposed of all the missiles from the series that included the missile whose engine the JIT demonstrated as evidence to support claims of Russia's involvement in the downing of the plane.