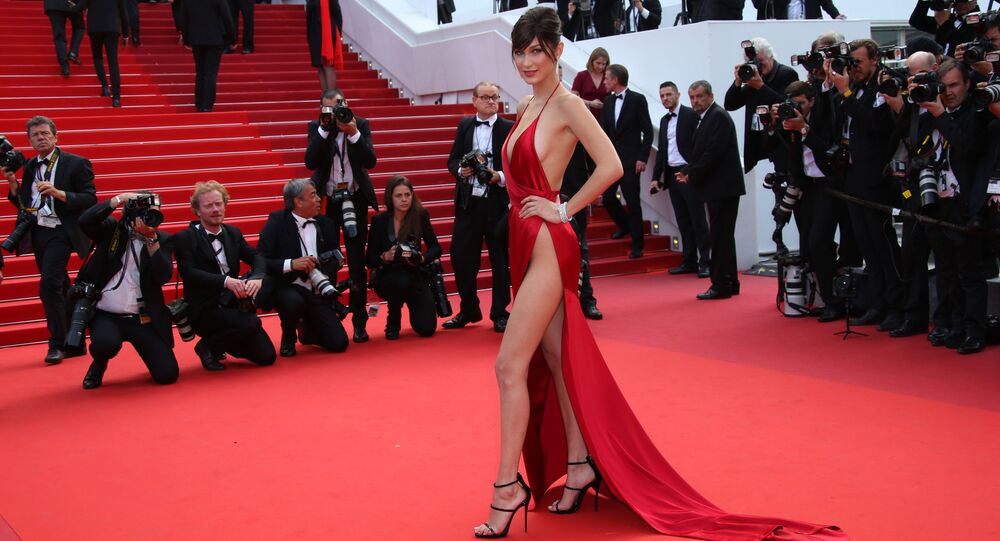 The gorgeous model, who has Palestinian roots, had previously posted pictures of herself on Instagram from an airport lounge with her feet propped up against a window, with airplanes painted with UAE and Saudi flags in the distance.

Victoria’s Secret Model Bella Hadid has been forced to apologise after she was slammed for racism when many social media users thought she was “kicking” planes that had the UAE and Saudi flags on them.

The gorgeous model, whose father is Palestinian, had previously posted herself on Instagram Stories from the lounge of an airport in some country, feet propped up against the window of a viewing area with airplanes as a backdrop, with some rushing to conclude that she was insulting the countries by “kicking” their planes.

After appearing on the Versace runway of Milan Men’s Fashion Week Spring/Summer 2020 over the weekend, Bella had been heading off to her next destination, and chilling in the lounge, when she took the ill-fated images.

Once they were up on Instagram, the shocked model found herself on the end of a #BellaHadidIsRacist tag.

In her apology, posted on different social media, the contrite model sought to clarify that her post “had nothing to do with politics”.

Bella's father Mohamed Hadid was born in Nazareth to a Muslim family in 1948, and later became a multi-millionaire real estate developer in Los Angeles.

this was an honest mistake on an early morning... never, ever would I intentionally try to offend anyone like that. I am so sorry ..❤️

“I never noticed the planes in the background and that is the truth. I would never mean to disrespect these airlines, let alone these amazing countries,” she wrote on her Stories to follow up.
“Not only do I have so much respect from the bottom of my heart, I have always tried to stand up for what I feel is right, especially regarding the great Middle East. I have never and will never be the one to talk down on these countries…”

Bella continued she sought “only to spread love, and the true beauty of them, as the way I was taught by my Teta and my father. To feel as if I have disappointed you is what hurts me the most”.

The model added she “would never want my posts or platform to be used for hate against anyone, especially those of my own beautiful & powerful heritage”.
She concluded:

“I want to send a sincere apology to those who ever thought I would put blame on them, especially to Saudi Arabia and the UAE… "This was never the case, and I hope you can understand the misunderstanding.”
The model for the iconic lingerie brand also took to Twitter to bring the message home:
“This was an honest mistake on an early morning… never, ever would I intentionally try to offend anyone like that. I am so sorry.”

@bellahadid seems to post an apologize for this #racist picture and claimed not seeing the airplane!! pic.twitter.com/uaxFS3KyND

​There was more than a little simmering as Twitterati responded to the original post and the apology that followed, with some unfollowing the model and slamming her for racism, others pointing out she had most likely been making a reference to another plane, another flight, and there was no insult intended at all.

​How is this racist? I remember watching this story and not even for a second did I look at what type of planes they were. Isn’t it tiring to be so criticizing ? Embarrassing to be focusing on things like this when there are real racists that pose a threat to people out there

anotha one makes reference to another flight or another plane, how is that racist or disrespectful?

@bellahadid
#بيلا_حديد
What we expect from a pathetic racist fake person who is only into money and fame.
She has forgotten her roots and care about nothing. pic.twitter.com/BZdD6RENcs

​Still others considered the whole situation contrived and believed Bella Hadid did not deserve all the vitriol targeting her.

#SupportBella
The whole situation is absurd. @bellahadid definitely IS NOT A RACIST. People, please, stop shading other people for no reason. She is not a bad person and she doesn't deserve all this hate pic.twitter.com/6BBSiBCAVq

Bella Hadid Keeps 'Her Girls Happy' With Pizza Onboard (PHOTOS)