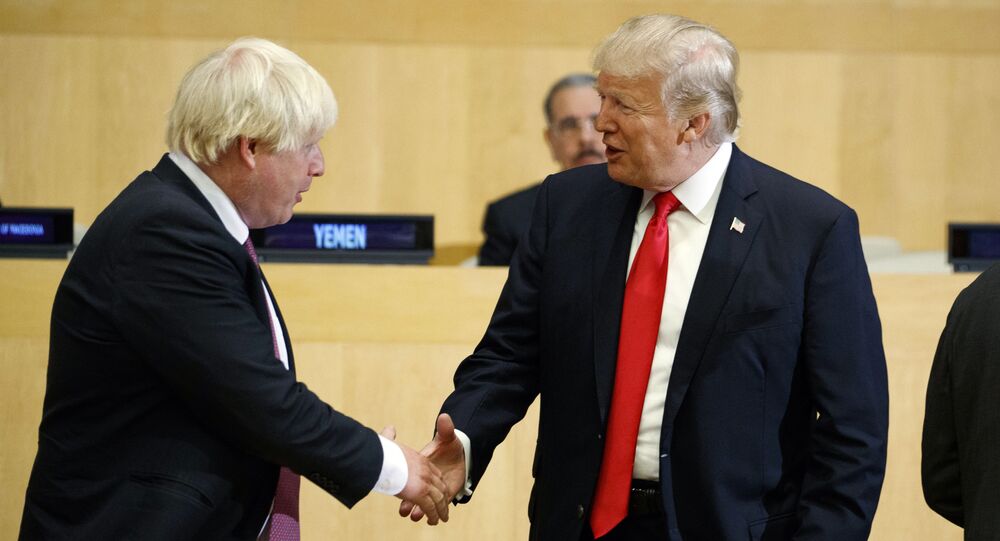 It seems like Boris Johnson, who has launched his political campaign to replace outgoing Theresa May as the UK prime minister, has more in common with US President Donald Trump than one might think – and it’s not just their trademark hair-do.

Despite all scandals surrounding the gaffe-prone former UK foreign secretary, Boris Johnson has topped the first ballot in the Tory leadership contest.

The bookies’ favourite, who’s been publicly backed by Donald Trump, once an outsider within his own party as well, has been consistently compared to the US President, and here’s why.

Basically No One Believed in Them

Back in 2016, American Republicans launched a Never Trump movement to prevent the real estate mogul from being nominated for the presidential election, while today Tories are trying to push the “Anyone But Boris” campaign to stop ex-London mayor from becoming the UK’s next prime minister.

Even though on the surface it seemed like Trump was an unlikely candidate to win compared to more experienced politicians, the Stop Trump movement failed – and it looks like the same fate will befall the Stop Boris campaign.

Distrusted within his own party, President Trump might not have won the popular vote, but he gained the electoral votes needed to defeat his Democratic rival, Hillary Clinton.

BoJo, as he’s colloquially named in the UK, has as well secured the most support in the first round of the vote by Conservative MPs in the Tory leadership race.

Love is in the Hair

As surreal as it may seem, both Boris and Donald were born in New York, and eerily look alike – thanks to their signature hair styles, which got comedian Trevor Noah thinking that they were “purposely” separated at birth in a somewhat Bollywood-y plot twist.

I think Boris Johnson looks more like Donald Trump's twin brother despite Trump's face looks more of an orange and looks like he's also had too much tan and their hair is ridiculous too. pic.twitter.com/8khKc7uYFn

The transatlantic twins – or cousins – have both been embroiled in cheating allegations: Trump has repeatedly been accused of sexual misconduct and having occasional flings while being married to FLOTUS Melania – something which he strongly denied, whereas Johnson found himself at the epicentre of a family scandal last year after British media claimed that he was being unfaithful to his wife of 25 years, Marina Wheeler.

And while Trump’s marriage stays afloat, Johnson is now an eligible bachelor – his spouse voted Leave.

Always Vote Leave, Whatever the Options

Private life aside, both politicians apparently have a thing for scrapping alliances and treaties: Trump, once a successful businessman, is evidently resorting to the Art of the Deal either trying to withdraw from agreements or to tailor them to the America First narrative, including the Trans-Pacific Partnership, the 1994 NAFTA deal, and the Joint Comprehensive Plan of Action, also known as the 2015 nuclear agreement with Iran, among many others.

Johnson, a zealous Brexiteer, doesn’t fall behind: the sharp-tongued politician, who was at the helm of the Leave campaign in the 2016 national referendum on whether the UK should remain in the European Union, once compared the 28-member bloc to a “badly designed undergarment – too tight in some places, far too constrictive, and dangerously loose in others”.

In a very Trumpian way, the Brit is determined to negotiate the most favourable terms for the UK to leave the EU and has even threatened to withhold a Brexit divorce payment and scrap certain controversial points of the withdrawal agreement unless the EU agrees a future relationship.

No wonder Trump thinks Britain’s blonde bombshell would be “excellent” as next prime minister.