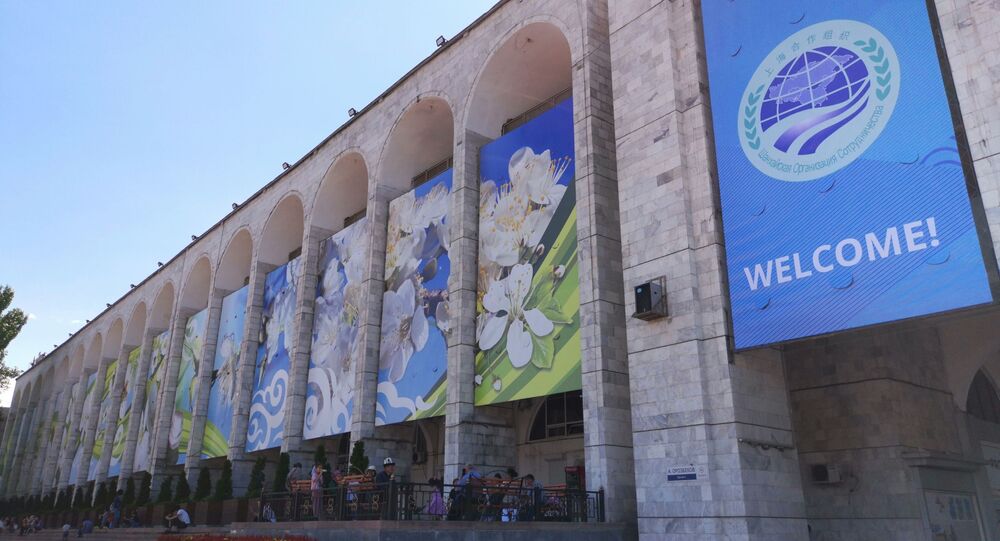 If you talk to locals in Bishkek, you’d notice that for many of them this year’s Shanghai Cooperation Organisation meeting is the biggest event of the year. Many roads within the capital region have been re-paved, at least one of them, as one driver told me – overnight. Major streets in Bishkek were decorated with floral compositions ahead of the event. Police even got themselves brand-new “toys”.

Quite unusual to see Latin lettering and signs in English in Kyrgyzstan, with its predominant use of Cyrillics. This and hundreds of police agents in the streets – some in the black Chinese police SUVs/APCs, is what you notice first when you arrive in Bishkek during SCO summit. pic.twitter.com/p9CtMA1VQH

​A building resembling a traditional Kyrgyz yurt has been constructed for the media at the Ala-Archa residence in the foothills of Ala-Too mountains, where the heads of the 8 Shanghai Cooperation Organisation member states and observer nations held their meetings on Thursday and Friday.

Despite the fact that most of the negotiations took place outside the capital, many side-streets in central Bishkek were cordoned off during the arrival of delegations, which led to heavy traffic jams. Central avenues, though, were not as congested.

Upon his arrival in Bishkek on Thursday, Russian President Vladimir Putin met with his Indian counterpart Narendra Modi. Even though there wasn’t much on the official agenda during the first day of the summit, Putin and other heads of state talked to each other informally during a gala concert and dinner.

Bishkek talks between Russian, Chinese, Indian leaders may very well lead to RIC-format meeting on the sidelines of the G20 summit in Osaka in the end of June. https://t.co/isr3JCWemY

India and Pakistan joined the bloc two years ago. New Delhi and Islamabad see big potential in their membership, as, according to some observers, it may help both countries to de-escalate tensions.

Journalists from both India and Pakistan were at the media center among 500+ intl media representatives covering the event, as Pakistan’s Prime Minister Imran Khan arrived at the Ala-Archa residence on Friday to join other members of the SCO council. pic.twitter.com/7G0ocGogbj

​Some of SCO’s geography can be easily recognised in the media centre's catering menu. Even though most dishes served to journalists were Pan-European, some were clearly from SCO member nations’ cuisines.

While kvass is mainly a Russian specialty, other drinks, such as Maksym and Chalap can be found in Kyrgyzstan as well as in Kazakhstan. Samsa (a savoury meat pastry) is known in all Central Asian countries, as well as in China’s Xinjiang. pic.twitter.com/DWjmrCebMd

​Even though the summit’s “political menu” was scripted and written well in advance of the event, the real agenda was heavily dominated by current affairs, with Iran – an SCO observer-member state, taking the stage after recent tanker incidents near the Strait of Hormuz.

Iranian President Hassan Rouhani had a chance to address Russian, Chinese, Indian, Pakistani and other SCO leaders over the situation in the region. He slammed the US for its aggressive approach and called it “a serious risk to stability in the region and the world”. pic.twitter.com/vw9U4lpqav

With SCO being among other things a security-related bloc, Rouhani’s concerns are likely to be heard by elites in powerful member states in countries with a total population of over 3.5 billion. It puts Trump in an uneasy situation – isolated from the decision-making process in such an important regional political club.

Sources: Prime Minister Narendra Modi's meeting with Iran President Hassan Rouhani in Bishkek, Kyrgyzstan, cancelled due to scheduling issues. The official banquet got delayed which disrupted the schedule of all the leaders. (file pic) pic.twitter.com/pGN6oyaytd

​And even though, some SCO members, such as India, are distancing themselves from openly aligning with Tehran, other countries, like Russia and China would probably be on the same page with Rouhani economically when it comes to countering Trump's protectionist policies and tariff wars. Iran is well aware of the latter, so the heavy anti-US rhetoric is not the only thing that Hassan Rouhani brought to the table in Bishkek. Speaking at the leaders’ meeting, he also offered preferential treatment for all companies and entrepreneurs from SCO countries entering the Iranian market.

SCO leaders signed the Bishkek Declaration, which lays out the bloc’s strategy for years to come. Besides this, member states agreed upon anti-terrorism, anti-drug, digital development policies, and issues, such as media cooperation.

The Shanghai Cooperation Organisation was formed in 2001 by 6 nations – Russia, Kyrgyzstan, China, Kazakhstan, Tajikistan, and Uzbekistan. India and Pakistan became full members in during the 2017 SCO summit in Astana. Among the bloc’s current partners and observers, among other nations, are Iran, Turkey, Mongolia, Afghanistan, Belarus, Azerbaijan, Armenia, Cambodia, and Nepal.

Last year the meeting of SCO leaders took place in China’s Qingdao, and next year’s presidency goes over to Russia, with the city of Chelyabinsk picked to host both 2019 BRICS and SCO summits.