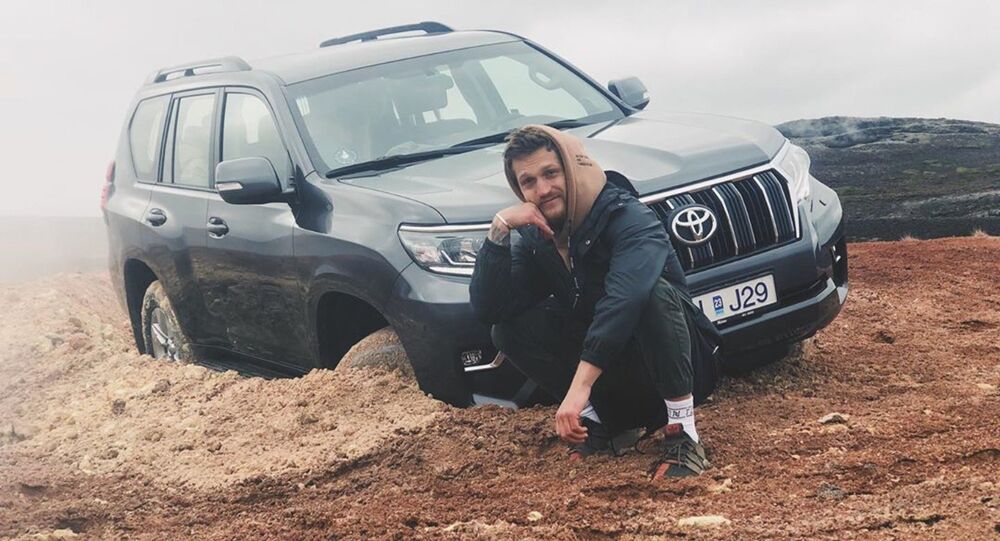 Off-road driving is a no-no in Iceland, where those found guilty can get slapped with hefty fines. The blogger who was caught red-handed is facing public backlash, with angry commenters saying he is no longer wanted in the country.

A Russian social media personality has found himself in trouble in Iceland after an off-road driving adventure went horribly wrong.

Alexander Tikhomirov, a travel blogger with over 300,000 Instagram followers, was driving down a highway in northern Iceland alongside four female companions, but apparently decided to go off-road to reach the volcanic Lake Mývatn and produce some wholesome content over there.

Unfortunately for the nature enthusiast, he got his rented Toyota Land Cruiser stuck in clay and failed to retrieve it on his own.

"Congratulate me, today I went into hock big-time and nearly ended our trip on the second day," he wrote, posing alongside the Land Cruiser buried deep in the clay morass.

Local newspapers report that witnesses then alerted police to the entrapped vehicle — and that's when Alexander found a huge surprise waiting for him.

Off-road driving is strictly prohibited in Iceland, with offences carrying fines of nearly $3,000 under the country's Nature Conservation Act.

And while the cops helped retrieve the off-roader with an excavator (which ended up damaging the precious soil even more than the violator), Alexander was questioned at a police station on Monday and is facing a massive fine.

Local authorities are worried that off-road traffic is causing substantial damage to fragile soil and vegetation. While a majority of locals are likely to be aware of that, major Icelandic tourist information websites don't hesitate to give explicit advice against off-road driving.

Needless to say, Icelanders flocked to social media to display their concern with their pristine nature, swamping the blogger with an avalanche of rebukes.

"You're no longer welcome in Iceland," wrote an angry user. "Not to mention that this is illegal, your disrespect is ruining for other tourists."

"Not sure one is able to find another group photo online with a lower combined IQ," an Icelander quipped under a photo published by one of the girls.

Another added: "Really disrespectful of the nature! Shame on you. I hope the government will let you pay for this."

Meanwhile, one Russian travel blogger, Alex Babin, came forward with a passionate call to end the hostilities, saying that his compatriot does not represent the entire nation.

"To all the Iceland residents on here: you have all the rights to be outraged by this, but please, don't draw conclusions about a whole country because of one man's crime. He is not a role model and he does not represent our population as a whole," he said.

"Most of us are respectful people just looking to see the world and not trying to damage anything. Also, I am quite astonished by the enthusiasm with which you guys care for your nature, that's something to learn from. Good luck, and I'm hoping for the lawful resolution to this unpleasant situation."