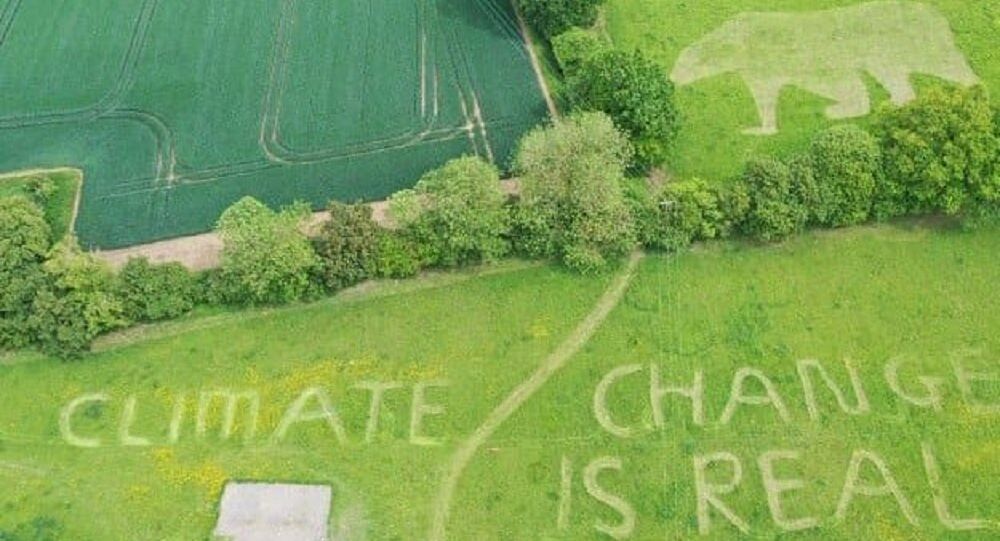 Even before the US president managed to set foot on British soil, some locals attempted to give him a hard time with a rude message on climate change. Theresa May, in turn, is expected to challenge Trump on his denial of climate change during his three-day state visit to the UK.

Ollie Nancarrow, a cocky 18-year-old art student, spent the weekend mowing out "Oi Trump" alongside a gigantic outline of a penis in a field for the POTUS to see as he'd fly into Stansted Airport.

At a nearby field, Ollie also left the message "Climate change is real" below a drawing of a polar bear.

WARNING: the image of the stunt may offend sensibilities

Guess who's been busy today mowing a stiff message for Trump under the Stansted flightpath… Please share and let's see how far we can spread the welcome!#climatechange #Trump #welcometrump pic.twitter.com/crnZo5rnDv

"Donald Trump and his denial of climate change are not welcome and I want him to be fully aware of that when he flies in to Stansted on Monday," he told a local newspaper.

Donald Trump, who once accused climate change scientists of having "political agenda", has courted controversy over his stance on the issue. Throughout his 2016 presidential campaign, he denied climate change and pledge to withdraw the United States from the Paris accord, which aimed to curb the emission of planet-warming gases and contain global temperature rises.

He delivered on that promise in 2017, while also launching a bid to ease Obama-era power sector rules and climate regulations, much to the outrage of environmental activists.

Last November, he cast doubt on a government report predicting that if the emissions growth stays at its current rate, it would bring hundreds of billions of dollars of damage to the US economy by the end of the century.

Most recently, he ridiculed Alexandria Ocasio-Cortez's so-called Green New Deal, a legislative initiative aimed at switching to a 100-per cent renewables-based economy and "decarbonising" national manufacturing, agriculture, and transport industries.

"It's something our country needs desperately," he said sarcastically at a conservative conference in March. "They have to go out and get it. But I'll take the other side of that argument only because I'm mandated to. I'm mandated."