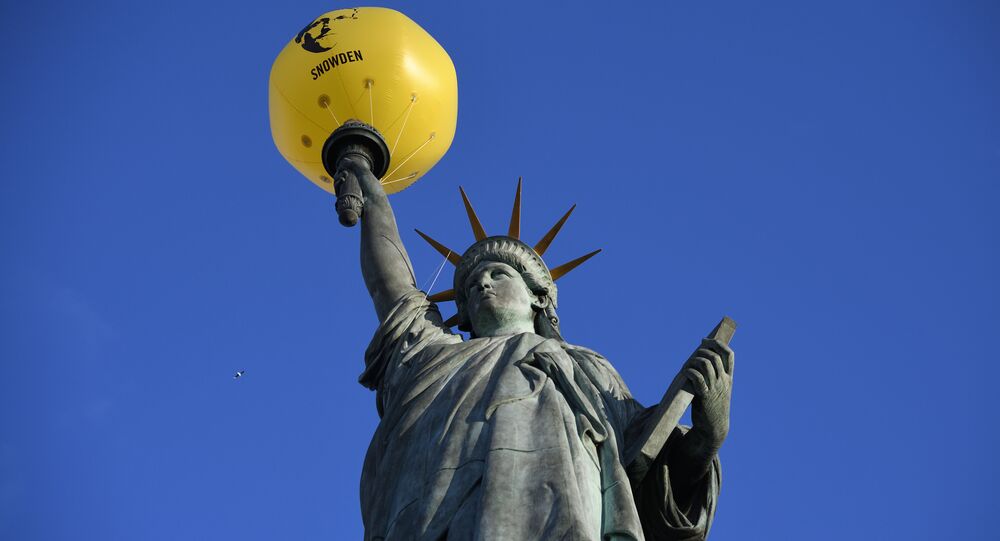 Six years after former NSA contractor Snowden shed light on the US government's questionable intelligence collection efforts, his message about the right to privacy appears to have been largely forgotten.

Edward Snowden, a disgraced US intelligence staffer who leaked troves of classified documents, has warned of what he described as the intelligence services' ever-increasing efforts to build a dystopian borderless social control system.

Speaking via a livestream from Russia during the Open Dialogue event at Canada's Dalhousie University, Snowden argued that US elites have become "absolutely intoxicated" by scientific advances and corrupted human knowledge toward a "military purpose".

"We're in the midst of the greatest re-distribution of power since the industrial revolution, and this is happening because technology has provided a new capability. It's related to influence that reaches everyone in every place. It has no regard for borders. Its reach is unlimited, if you will, but its safeguards are not," he said.

Snowden, a former US National Security Agency (NSA) contractor, came to international prominence in 2013 after leaking a cache of highly sensitive documents about the agency's mass surveillance efforts.

It was revealed that the NSA had intrusively monitored US citizens' internet and phone connections, and spied on citizens and even heads of allied countries.

Snowden also exposed the so-called Five Eyes, a coalition of five Anglophonic countries (the US, the UK, Australia, Canada, and New Zealand) whose intelligence agencies are said to be cooperating through secret spying programmes and intelligence-sharing agreements.

During the livestream, Snowden went on to show what he called a global heat map of mass surveillance carried out by the United States, which appeared to show that the US most closely monitors Asian countries such as Iran, Afghanistan and Pakistan, as well as China.

Notably, he added, the map indicates that the 'Big Brother' is more invested into surveillance inside the United States, the United Kingdom and Germany, rather than in Russia, which is viewed in Washington as a traditional adversary.

He said human desire for interaction and communication is being exploited by commercial and government institutions, which monitor and influence the behaviour of people who voluntarily − yet often unwittingly − consent to it through contracts and agreements they don't care to or simply cannot examine thoroughly enough.

"Everything has hundreds and hundreds of pages of legal jargon that we're not qualified to read and assess and yet they are considered binding upon us," he said.

The whistle-blower maintained that these institutions "have structuralised and entrenched it to where it has become now the most effective means of social control in the history of our species."

He referred to the so-called PRISM programme, which the NSA reportedly uses to gather private electronic data belonging to users of social media platforms and customers of tech giants.

"This technology allows these institutions to monitor and record the private activities of people on a scale that's broad enough that we can say it's close to all-powerful," he said, adding that the government appeals to corporations' patriotism, cites security risks, or sometimes coerces them into giving out the information it wants.

Snowden is facing espionage charges in the United States, carrying a sentence of at least 30 years in jail combined; he has received asylum in Russia and is currently living at an undisclosed location in Moscow.

Snowden's revelations sparked a public debate on the relationship between mass surveillance and the right to privacy, with some people justifying the NSA's intrusive actions with the threat of terrorism.

He claims, however, that plans for such a programme were laying on the shelf for quite a while even before 9/11, but that legislators were "not in a position" to pass it until the whole nation was united by the tragedy.