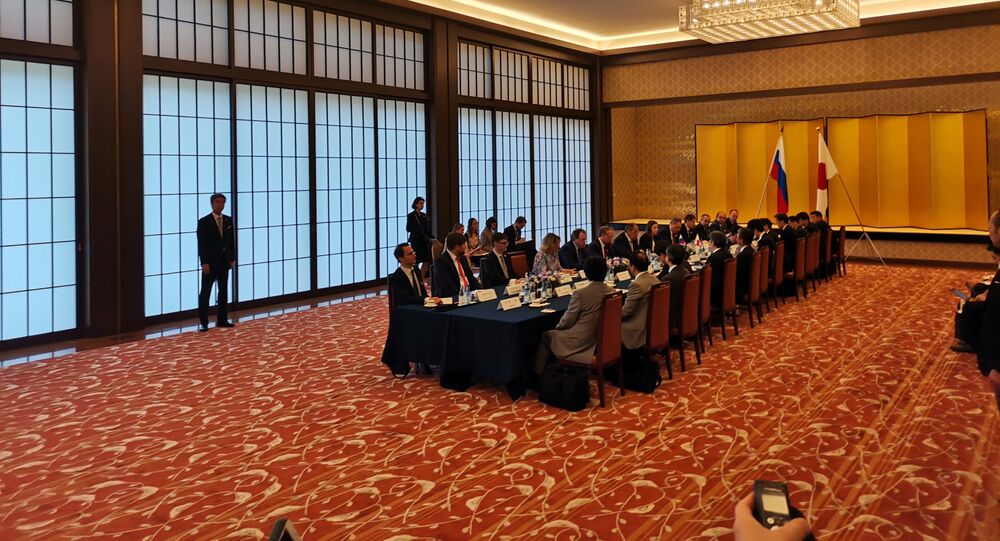 Moscow and Tokyo’s top diplomats held bilateral negotiations in the Japanese capital on the second day of Sergey Lavrov’s visit to the country. The agenda included talks on post-war peace treaty, and on visa-free regime agreement between the two countries.

When Russian foreign minister Sergey Lavrov and his Japanese counterpart Taro Kono, both accompanied by defence ministers of their countries, started their talks in 2+2 format on Thursday, everything went without major disturbances. But on Friday, when top military officials left, giving way to bilateral diplomatic negotiations, Japanese foreign ministry compound looked almost like a fortress besieged by local ultranationalists. Two vans were driving slowly around the block, playing recorded anti-Russian messages through loudspeakers.

“Northern Territories – give them back!” – this shouting continued throughout Russian-Japanese talks. Police uses microphones to measure the audio volume, and if it’s higher than permitted by the authorities, the activists will receive fines. pic.twitter.com/jJN55eWIlP

​The talks themselves are being held behind closed doors, with both sides agreeing not to disclose the details to the public, and most of the time it takes a lot of guesswork on media's side to shed light on what exactly Sergey Lavrov and Taro Kono are saying to each other. So, literally every bit of information coming from the officials is priceless.

Japanese diplomats did a lot to prepare for the talks. Everything was fine during Taro Kono's introductory remarks on Friday, but when it was Sergey Lavrov's turn to speak, the audio level of his microphone suddenly went down to nearly zero, so it was very hard for journalists to hear his speech.

Japanese diplomats carefully rehearsed the arrival of Taro Kono and Sergey Lavrov for camera crews, showing how they will shake hands. But when Lavrov actually arrived and started speaking, reporters had to do acrobatics to hear the sound from ceiling-mounted speakers. pic.twitter.com/3DKxKU5msA

​Nevertheless, Lavrov had a chance to talk to the press once again that day — this time at the Russian embassy, where his statements on peace treaty between Russia and Japan, and on Tokyo's territorial claims, were loud and clear.

The head of Russia's diplomacy said that his country acts in accordance with the 1956 Moscow Declaration signed by Japan and the Soviet Union. Lavrov added that a peace treaty between the two nations has to be signed, and the signing of the treaty is impossible without accepting the outcome of World War II. The document, according to the Russian minister, also states that Soviet Union was prepared to express good will and to go on with negotiations on border issues, but with Peace treaty being a necessary first step:

"The fact that there is a groundwork [in the 1956 declaration] to do this as an act of Soviet Union's good will, as it's will to take into consideration the interests of Japanese people, means only one thing — that the islands at the time of the signing are being perceived by both sides as inseparable part of Soviet Union's territory. And without acknowledging this fact it's impossible to move further".

Japan has a different view on the issue, and so far has refused to sign the peace treaty, putting the territorial claims as a prerequisite to further actions.

At their talks in Tokyo the two Foreign ministers also addressed other issues, such as joint projects in agriculture, banking, energy and tourism.

​Russia wants to introduce mutual visa-free regime with Japan — first for those who live in Japan's Hokkaido and Russia's Sakhalin region, and later — for all other citizens.

Lavrov's visit is a part of preparations for the meeting between Russian and Japanese leaders in Osaka in the end of June. It's expected that President Vladimir Putin and Prime Minister Shinzo Abe will hold talks on the sidelines of G20 Summit.