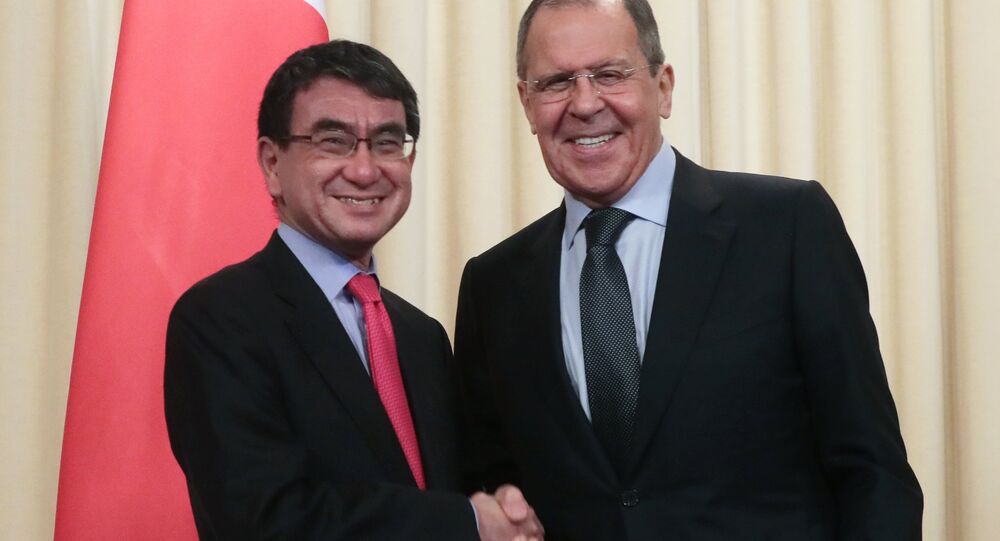 The fourth round of Russo-Japanese talks in the 2+2 format has kicked off in Tokyo. Besides bilateral issues, the foreign and defence ministers of the two countries will be discussing regional and global security.

The "theatrics" of the Tokyo 2+2 talks are always impressive: motorcades with Russian and Japanese flags arrive at the Foreign Ministry compound, with Russian generals and diplomats shaking hands and gathering across a big table to hold talks.

​Usually the arrival of the delegations is accompanied by rallies around the corner, as Japanese ultranationalists shout anti-Russian slogans.

Even though dozens of police agents gathered to cordon off the Foreign Ministry compound in Tokyo, the Russo-Japanese 2+2 talks started without the usual distractions – for some reasons local ultranationalists ignored the event. pic.twitter.com/01foLdIy7a

​Russian Foreign Minister Sergei Lavrov expressed condolences to his Japanese colleagues over Tuesday's stabbing in the town of Kawasaki, which left 3 people, including a foreign ministry employee, dead and 18 people injured.

Even though Russian and Japanese diplomats have many bilateral issues on the table during these negotiations, some important topics are influenced heavily by third parties. Several years ago, during Barack Obama's second term in the White House, his administration openly objected to Japan's attempts to keep its dialogue with Russia going.

Now, with Trump in office, the diplomatic pressure from Washington doesn't seem to be as obvious, but it does appear to have been replaced by things that Moscow considers to be far more dangerous, such as pressuring Tokyo to deploy American Aegis Ashore missile defence systems, which are capable of launching Tomahawk missiles. Earlier this year, Sergei Lavrov said that the deployment of this land-based system is a violation of the Russia-US Intermediate-Range Nuclear Forces Treaty (INF).

So, at least part of Lavrov's speech at the 2+2 talks in Tokyo on Thursday was meant to be heard far away from Japanese shores:

"We see attempts to replace the rule of international law, as it's established by the UN Charter, with rules invented by our Western colleagues — rules that serve their interests. The dismantling of arms control mechanisms by Washington for the purpose of establishing absolute military domination in any part of the world is particularly risky".

Even though the US is considered to be a close ally by most Japanese politicians, it wasn't Russia's Sergei Lavrov, but the US commander-in-chief, whose visit was marked by protests in different parts of Japan.

It appears that things don’t go smoothly for the US and Japanese authorities regarding the deployment of Aegis Ashore. Trump's arrival in Japan was marked with protests last week. https://t.co/v24bSSlL2O

© REUTERS / Jonathan Ernst
Trump Says There is 'Great Respect' Between US and DPRK
​Japan also voiced its concern during the 2+2 talks with Shoigu and Lavrov over the situation in North Korea and Pyongyang's nuclear dossier. Tokyo's top diplomat Taro Kono said that the situation in the region changes by the hour and it's important to exchange opinions with his Russian colleagues.  According to Sergei Lavrov, Russia shares these concerns and calls for the denuclearisation of the Korean Peninsula.

On Friday Sergei Lavrov and Taro Kono will continue negotiations in bilateral format. It's expected that the diplomats will discuss a number of issues, including a post-war peace treaty between the two countries — a subject that has been on the agenda of Soviet-Japanese and subsequently Russo-Japanese talks since the end of World War II.