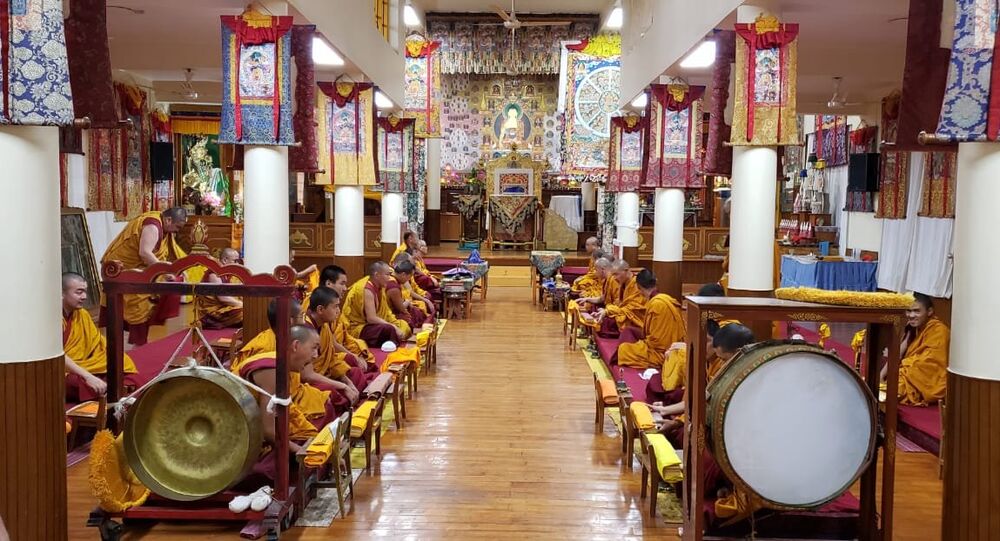 NEW DELHI (Sputnik) - The Dalai Lama, the 83-year-old Tibetan Buddhist spiritual leader, is back on his feet after a recent chest infection but is still avoiding any energy-consuming work and is going to stay at his residence in the northern Indian hill town of Dharamshala for some time, his office said.

The Dalai Lama was taken to a hospital in the Indian capital New Delhi with a chest infection last month. After spending a few days there, the Dalai Lama returned to Dharamshala and was said to be in a stable condition.

A Sputnik correspondent traveled to Dharamshala to speak with Lakhpa Dolma, the spokesperson for the Dalai Lama's office.

"His Holiness Dalai Lama is doing his daily routine, although his activities are minimized after he came from the hospital after the illness," Dolma told Sputnik.

According to the director of the Dalai Lama's office, Tsering Dhondup, the Tibetan spiritual leader is now "fit" but is still "not taking any strenuous work like preaching for long hours."

He will not be leaving Dharamshala for some time, the director added.

One of the senior Buddhist monks told Sputnik on the condition of anonymity that, "although the Dalai Lama is now free from his lung infection, he has become frail and he needs support for his daily chores."

During their visit to Dharamshala, the Sputnik correspondent attended the Kalchakra Puja ritual, a special Buddhist prayer, at the Dalai Lama temple. During Kalchakra Puja, Buddhist monks prayed and recited verses.

The 14th Dalai Lama, Tenzin Gyatso, is a spiritual leader of Tibet. After an uprising against Chinese rule in 1959, he was forced into exile in MacLeodganj, which is situated in the northern Indian state of Himachal Pradesh. The Dalai Lama was awarded the Nobel Peace Prize in 1989.