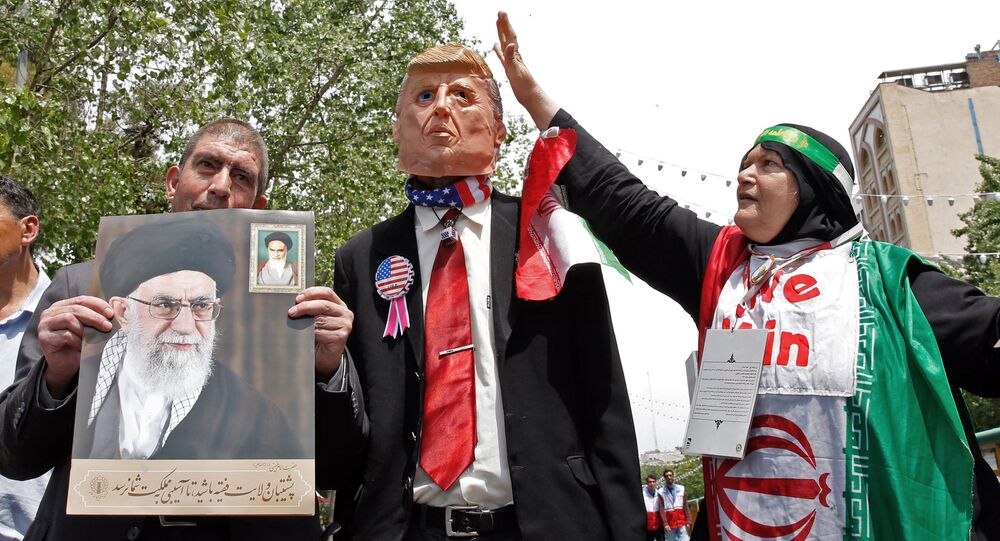 Donald Trump is currently visiting Japan, whose prime minister is said to be considering serving as a mediator in possible peace talks between Iran and the United States.

The United States is not looking to overthrow Iran's government, President Donald Trump said on Monday, as tensions between the two countries flared with Washington deploying troops to the region.

"I know so many people from Iran, these are great people. It [Iran] has a chance to be a great country, with the same leadership. We are not looking for regime change, I just wanna make that clear," Trump said at a press conference in Tokyo, adding that he thinks "we'll make a deal" with Tehran.

The POTUS is in Japan on a four-day visit; the country's prime minister, Shinzo Abe, who is seen as Trump's closest ally in Asia, was reported by local media to be considering a visit to Iran in June in a bid to repair the damaged relations between Washington and Tehran.

Yomiuri Shimbun newspaper reported on Monday, citing government sources, that Abe made Trump aware of his intention in a private conversation, and that the US president backed the idea.

Meanwhile, a top Iranian diplomat said on Sunday that Tehran was ready to hold talks with all Persian Gulf states but ruled out any direct or indirect talks with the US.

After a period of rapprochement under Barack Obama, US-Iran relations have been progressively worsening since Donald Trump took office. Tensions began to escalate last year after he withdrew the US from the 2015 nuclear deal, citing its inability to prevent Iran from pursuing nuclear weapons development.

Washington went on to re-instate crippling economic sanctions against the oil-rich country, targeting its crucial oil exports as well as banking and shipping sectors.

Iran and the remaining signatories of the deal (Russia, China, Britain, France and Germany) have repeatedly critiqued the sanctions and their rationale. On 8 May, Tehran announced it was scrapping parts of the nuclear deal and gave the EU a 60-day ultimatum to provide effective means to help it circumvent US sanctions, threatening to step up uranium enrichment.

Recently, the Pentagon began building up its military presence in the vicinity of Iran, under the pretext of countering an unspecified military threat. Apart from deploying an air carrier and a fleet of bombers to the Middle East, the US has reportedly sent a convoy of military vehicles and troops from Jordan to Iraq and is about to dispatch an additional 1,500 more troops.