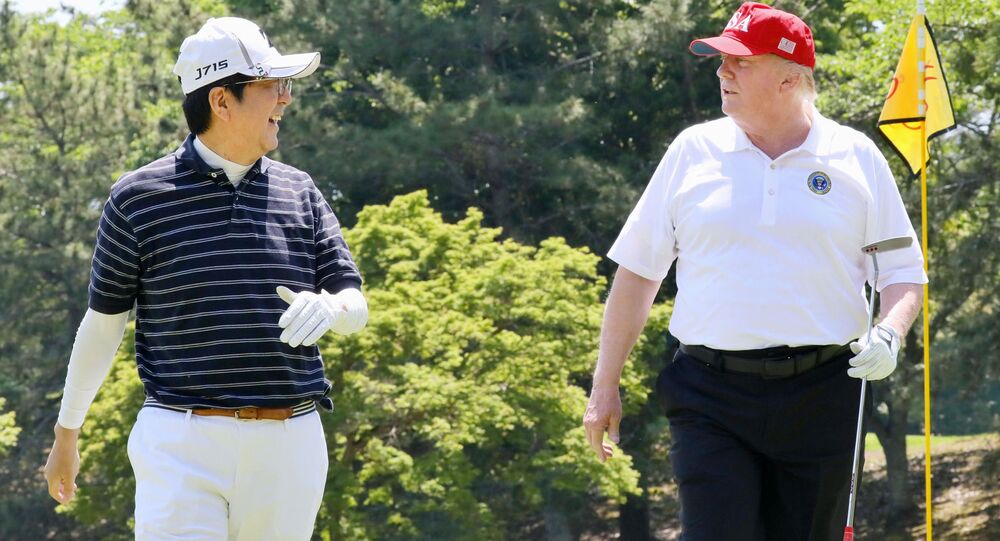 Trump's 11,000-kilometre journey to Japan hasn't all been about snacks and sports: the US leader, in line with his 'America First' policy, is trying to fix his country's growing trade deficit with Japan while also addressing security concerns.

Donald Trump's official visit to Japan took an informal turn on its second day, with the POTUS and the Japanese Prime Minister, Shinzo Abe, engaging in a variety of buddy-like activities.

According to Shinzo Abe's office, Kantei, the two world leaders had a morning of golf at a country club south of Tokyo on Sunday. The two posed for a smiling selfie, with Trump donning a red "USA" hat.

Sportsmanship aside, Trump soon revealed what actually was on his mind.

"Great progress being made in our trade negotiations with Japan," he tweeted as he arrived from the golf course back in Tokyo. "Agriculture and beef heavily in play. Much will wait until after their July elections, where I anticipate big numbers."

Trump's arguably closest confidante in Asia, Shinzo Abe continued his charm offensive on the POTUS at lunch. After the golf, Trump and Abe continued to bond over double cheeseburgers made with US beef, Japan's Foreign Ministry said in a statement.

Later in the day, Donald Trump and his better half, Melania, had a taste of one of Japan's most revered cultural traditions − sumo. They were pictured sitting ringside at the annual Grand Sumo Tournament in Tokyo alongside Abe and his wife Akie — the first time in history the leaders of Japan and the US have watched the tournament together.

Trump then entered the ring to award the grand champion, the 25-year-old Asanoyama, with a big-eared, eagle-topped President's Cup.

Trump and Abe are set to have bilateral talks on Monday, which are expected to focus on trade and the security situation in the region. Donald Trump, who delayed the introduction of auto tariffs against Japan last week, is likely to attempt to negotiate a new trade deal.

On Saturday night, Trump said the new arrangements were going to address the trade imbalance and remove barriers to US exports to Japan.

It comes as Japan's trade surplus with the US surged almost 18 percent to $6.6 billion, driven partly by an 8.3-percent hike in auto exports — something that is very, very likely to bother Trump, who started a trade war with China last year, citing a huge trade deficit.

Shortly after his arrival in Japan, Trump also downplayed recent North Korean missile tests, tweeting about "some small weapons" having been fired off.

"I have confidence that Chairman Kim will keep his promise to me," Trump said, referring to North Korea's moratorium on nuclear and missile tests.

After sitting down with his Japanese counterpart, Trump is scheduled to join Japan's new Emperor Naruhito for a lavish dinner — becoming the first foreign leader to meet with Naruhito — and give a speech at an American naval base in Yokosuka.