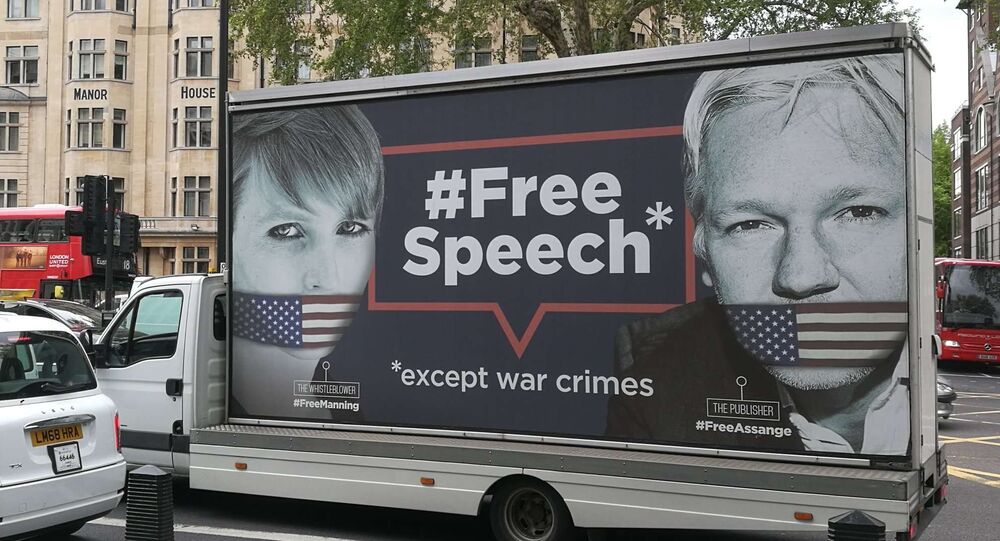 MOSCOW (Sputnik) - The Committee to Protect Journalists (CPJ) has condemned new charges brought against WikiLeaks founder and famous whistleblower Julian Assange in the United States, calling them a threat to the freedom of the press and journalists around the world who dare to make secret government information public.

"The indictment of Julian Assange under the Espionage Act for publishing classified information is an attack on the First Amendment and a threat to all journalists everywhere who publish information that governments would like to keep secret. Press freedom in the United States and around the world is imperilled by this prosecution", CPJ Executive Director Joel Simon was quoted as saying in a statement released on the organisation's official website late on Thursday.

The US Justice Department Thursday indicted Assange on 17 additional charges related to a major leak of American classified national defence documents back in 2010. The whistleblower now faces up to 175 years in prison if he is tried in the United States.

Assange was arrested in London on 11 April and sentenced to 50 weeks in a UK prison for jumping bail back in 2012, when he took refuge inside the Ecuadorian Embassy in the UK capital. By staying in the diplomatic mission, the whistleblower thought to avoid extradition to Sweden where he faced sexual assault charges that have since been dropped, and possible subsequent extradition to the United States for his classified data leaks.

© AP Photo / Jacquelyn Martin
'They Use Law as Sword': Chelsea Manning Condemns Additional Charges Against Assange
The United States has until 12 June to provide UK authorities with all the necessary documents for Assange's extradition. Meanwhile, Swedish prosecutor's announced in mid-May that the investigation into sexual assault charges against the WikiLeaks founder would be reopened as well.
...
Reddit
Google+
Blogger
Pinterest
StumbleUpon
Telegram
WhatsApp
10