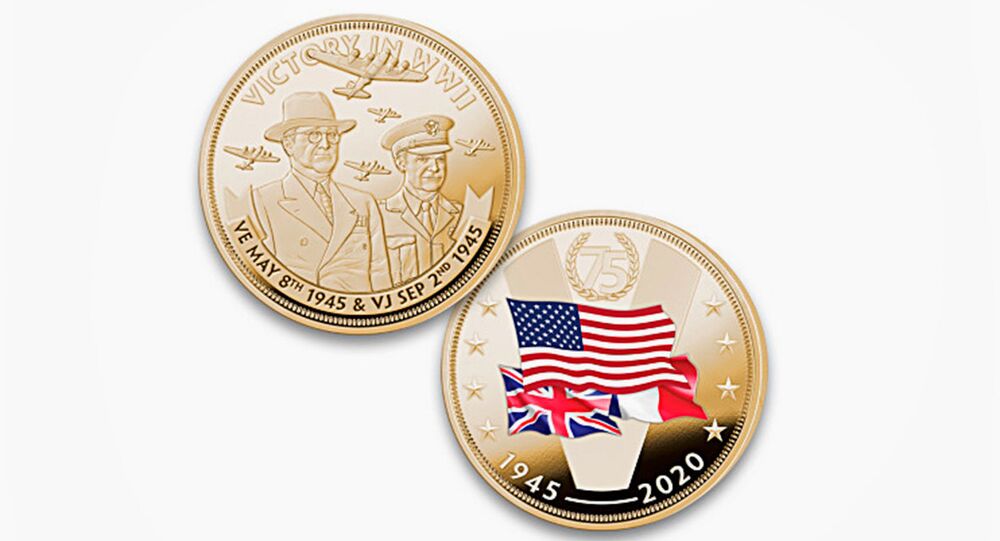 Apparently, the Soviet Union, whose soldiers hoisted a red flag over the Reichstag marking the liberation of most of Europe from the Nazis during World War II, is not a country that contributed to securing the "liberties" the Western states "enjoy today", per a US company which issued a souvenir commemorating the victory's upcoming anniversary.

A commemorative coin released by The Bradford Exchange for the 75th anniversary of the end of the Second World War depicts the flags of three countries — the United States, France, and the United Kingdom — to remember "all those who served and sacrificed to secure our freedom".

© Sputnik / Aleksandr Vilf
Russia’s Ongoing Victory Day
The Soviet flag, which was famously raised over the Reichstag building in Berlin as a symbol of victory over Nazi Germany, has somehow been left out of the "perfect patriotic gift".

It looks ever more farcical given that it was in the USSR's Stalingrad that the Nazis were dealt one of their most crushing defeats, which marked a turning point, and that the Soviet Union suffered the biggest human losses — an estimated 27 million — during the war.

Geoffrey Roberts, a leading British scholar on Soviet diplomatic and military history, has desribed the newly-minted commemorative coin a "complete distortion of the true nature of the allied victory in the Second World War".

"France was a defeated power during that war, not a victorious one. The Soviet flag should have featured alongside the British and American flags on the coin since it was the USSR that played the primary role in beating Hitler and the Nazis", he says.

The obverse of the coin depicts Harry Truman, the 33rd President of the United States, who assumed office just days before victory in Europe in April 1945 after Franklin D. Roosevelt, the main wartime president, died; and US Army General Dwight Eisenhower, who later succeeded Truman in the White House.

"The other side of the coin is also highly problematic. Eisenhower, who features alongside Truman was certainly an important general but so too was Britain's [Bernard Law] Montgomery and the Soviet Union's [Georgy] Zhukov. The Second World War was won by an allied coalition headed by the Big Three — Britain, the US and the USSR", Roberts elaborates.

The company Bradford Exchange, from the USA, has released a souvenir coin for the 75th anniversary of the end of World War II with the allied countries. But, the flag of the USSR, which made the main contribution to this victory, for some reason is missing.#USSR #USA #WWII pic.twitter.com/VLDJVcdsuF

This is not the first time that the USSR's pivotal role in the Second World War, which lasted from 1 September 1939 to 2 September 1945, has been diminished despite the fact that starting from 1941 the Soviet Union bore the brunt of Nazi Germany and paid the harshest price in terms of human losses, with the Red Army becoming the main engine of fascism's destruction.

"It is estimated that between 20-25 million people in the former Soviet Union died during World War II, and that soldiers of the former Soviet Union played the crucial role in the defeat of Hitler's Germany. This type of historical amnesia is all-too-common among Americans, and reflects the sad state of real historical teaching in our country", Professor Thomas Schwartz, historian of the foreign relations of the United States, has pointed out.

© Photo : Wikipedia screenshot
Lost World War II–Era Soviet Submarine Found in Gulf of Finland
For instance, history textbook "Britain in the XX century" claims that Moscow’s direct contribution to London’s efforts was zero, and the Soviets' participation in the Allies' overall strategy was limited to demanding resource supplies or an immediate Anglo-American landing in France.

Strongly opposed to that narrative, Michael Jabara Carley, a professor of history at the Université de Montréal and the author of "Silent Conflict: A Hidden History of Early Soviet-Western Relations", says that Soviet soldiers made the Allied landing on the Normandy beaches possible, having sealed the fate of the Nazi Wehrmacht during the battle of Stalingrad months before.

"The coin is nothing: it is the West’s fake history about who 'won' WWII which is the problem. When the US and its 'allies' assume all the credit for victory, they are like soldiers wearing medals they took from others, in fact from the Red Army, and did not win themselves", Jabara Carley elaborates.