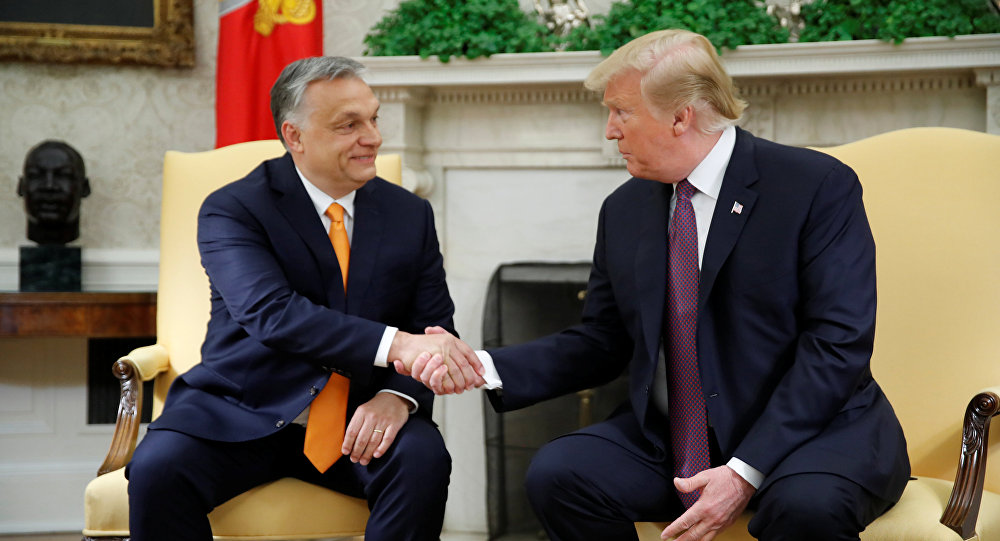 In addition to bolstering his country's defence capabilities with US weapons, Orban is understood to have asked Trump for assistance regarding the supply of an alternative to Russian gas.

The PM refused to delve further into the issue but stated that the construction of the "modern Hungarian Army" is underway.

Viktor Orban on Monday became the first Hungarian prime minister to visit the White House in 14 years. Donald Trump publicly praised Orban, who has been incrementally estranged from Western Europe, as a "tough" and "respected" leader.

"Viktor Orban has done a tremendous job in so many different ways. He's highly respected, respected all over Europe. Probably like me a little bit controversial, but that's OK. That's OK. You've done a good job. And you've kept your country safe," Trump told his counterpart in front of reporters ahead of their meeting.

The US president, who is often likened to Orban due to a similar hard-line immigration stance, told him at the end of the meeting that "it's like we're twins", US Ambassador to Hungary David Cornstein said in an interview with a local media outlet.

The envoy said that the two leaders discussed matters such as trade relations, energy and arms purchase in general, without going into specifics.

According to AP, however, Orban asked Trump to prop up US-Romanian cooperation regarding the extraction of natural gas. Hungary, which relies heavily on Russian gas deliveries, wants Exxon Mobil to tap Romania's gas fields in the Black Sea.

© REUTERS / Bernadett Szabo
While EU Lashing Out at Orban, Hungary Finds Allies in Italy, US

Exxon is currently weighing whether to invest in an offshore gas project in Romania, but Hungarian Foreign Minister Peter Szijjarto threatened to strike a long-term gas supply deal with Russia if the US oil giant fails to take this decision by September.

Hungary's controversial prime minister, who is serving his third consecutive term and fourth overall, has been scolded in the European Parliament for the alleged erosion of democratic values under his rule and for targeting NGOs that help refugees and asylum seekers.

Orban is a vocal opponent of tough immigration policies. "There will be two civilisations in the EU," he said in January, "one mixed Muslim-Christian in the West, and one traditional European-Christian in Central Europe."

He has also openly opposed EU plans to enforce refugee redistribution quotas; Hungary, meanwhile, was one of the first countries that refused to sign the UN Migration Compact.