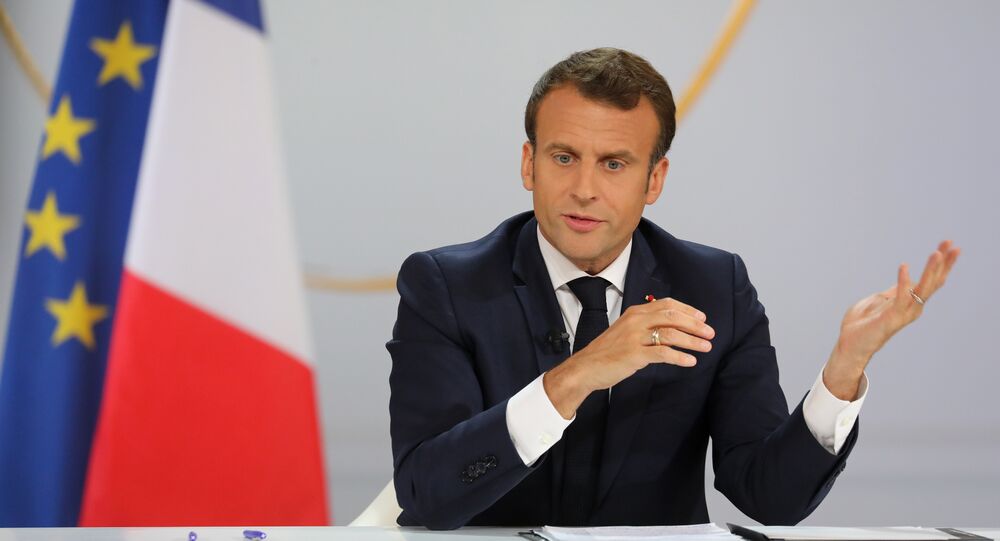 The French President’s move has incensed other NATO countries, as US defence chiefs and Brussels diplomats warn that Macron’s stance could split the alliance and threaten security.

Under plans being pushed forward by French President Emmanuel Macron, Britain’s defence firms will be frozen out of lucrative EU contracts once Brexit is done and dusted.

The French president is leading a blocking minority of EU countries to bar the UK and other non-EU NATO allies from bidding for project contracts in the Permanent Structured Cooperation (Pesco) initiative.

© AP Photo / Evan Vucci
Macron Slams US Business Model as Getting Out of 'Democratic Control'
There has been a torrent of furious criticism targeting the scheme, with The Express quoting an official from an EU country as saying France wanted “protectionism without protection”, as French defence companies would stand to benefit from Emmanuel Macron’s proposals.

The UK is not part of Pesco and has always been vocally against the EU pooling defence funding, for fear of undermining NATO. It has similarly never approved of Macron’s vision of a "true, European army".

“It would make no sense for the EU to shut out long-standing NATO allies from defence procurement contracts.”

“British defence companies have world-leading expertise and our armed forces will continue to work closely together under the NATO umbrella following Brexit.”

Macron’s proposals met with a barrage of criticism from Washington, which dispatched a letter to the EU chiefs, warning them to deliberate on the benefits of transatlantic co-operation prior to making rash decisions.

In a 1 May letter, the U.S. government branded the limitations being considered on the involvement of non-EU countries in the European pact as “poison pills”.

“It is clear that similar reciprocally-imposed US restrictions would not be welcomed by our European partners and allies, and we would not relish having to consider them in the future,” said the letter, seen by Reuters, which was sent from two US Department of Defense undersecretaries, Ellen Lord and Andrea Thompson, to the EU’s foreign affairs chief, Federica Mogherini.

Possible rules restricting US defence contractors’ participation would also be tantamount to “a dramatic reversal of the last three decades of increased integration of the transatlantic defence sector,” the letter read, quoted by Reuters.

According to the letter, “The US is convinced that with small changes to the draft regulation for the European Defence Fund, the concerns can be eliminated.”

But it warns: “Reciprocal restrictions would not be welcome in Europe, and we would not enjoy contemplating them.”

The EU’s foreign affairs chief, in a bid to allay US concerns, was swift to respond.

“The European Union is and remains open to US companies and equipment,” she told reporters on Tuesday.

EU defence ministers, who discussed the rules governing the pact on Tuesday, are trying to agree upon legislation by June on how to allow the involvement of non-EU countries, including post-Brexit Britain and the United States.

Dutch Defence Minister Ank Bijleveld said his country wanted US involvement and had suggested something of an “emergency brake” mechanism that the EU governments would be able to trigger if the participation of non-EU states in a certain defence project sparked their concerns.

German Minister of Defence Ursula von der Leyen, along with her French counterparts, has campaigned for increased cooperation within the EU, repeatedly stressing the importance of European independence.

The defence minister said “we Europeans are doing what our American friends have been demanding from us for many years,” adding “our job now is to build confidence that NATO will benefit from the Defence Union efforts.”

EU and NATO officials have been stressing the need for coherence in Europe’s future defence cooperation, yet crucial decisions on EU military project participation and funding issues have been delayed, also due to the Brexit stalemate.