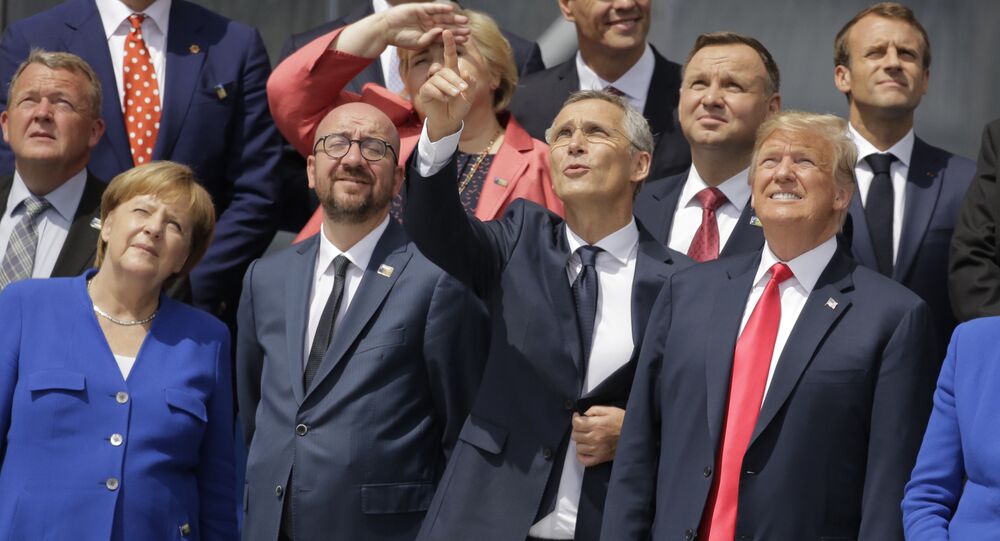 US President Donald Trump has consistently criticised NATO, urging member states to boost their defence spending and accusing them of taking advantage of the United States. He, however, has been "very insulted" by European President Emmanuel Macron's idea of creating a pan-European army to protect itself from China, Russia, and even the US.

The United States has warned the European Union of economic and political consequences if the 28-member bloc goes ahead with the development of its own defence projects, El Pais reported, citing a letter by US Undersecretary of Defence for Acquisition and Sustainment Ellen Lord to Federica Mogherini, the bloc's foreign policy chief.

In the letter dated 1 May, Lord reportedly stressed that the EU's current defence plans jeopardise a decade-long integration of the transatlantic defence industry and military cooperation within NATO.

© AFP 2021 / ATTA KENARE
EU, France, Germany, UK Concerned Over US End to Iran Oil Waivers - Statement
Washington is "deeply concerned" with the adoption of a new regulation in the European Defence Fund that allows EU member states to encourage non-European nations to take part in projects, but says that the EU has exclusive intellectual property rights in those projects.

In addition, it doesn't allow third countries to control exports of the weapons that are being developed.

According to El Pais, the US is also dissatisfied with the "general conditions" of the EU Permanent Structure Cooperation (PESCO) initative, since participation in its projects is also limited and requires unanimous approval by EU countries, so Washington is alleged to be worried that a single member's veto will leave it out.

"It is clear that if the US imposes similar reciprocal restrictions, it would not be welcomed by our European partners and allies. We would not like to have to consider it in the future", Lord warns in the letter, as quoted by El Pais.

The United States has as well accused the EU of developing its military capabilities "in a way that produces duplication, incompatibility of military systems, dispersion of scarce defence resources and unnecessary competition between NATO and the EU".

The US Department of Defence has warned that, in its view, the Fund's projects and PESCO "represent a dramatic reversal after three decades of increasing integration of the transatlantic defence industry", adding that "not only could the constructive relationship between NATO and the EU be damaged, but it could potentially revive the confrontational discussions that dominated 15 years ago our contacts on European defence initiatives".

Therefore, the US requires that the Fund's draft regulation be modified to eliminate the conditions on intellectual property and export control, as well as eliminating PESCO's veto power. Washington also wants the country leading any project to be allowed to invite any company that it wishes to take part in the initative.

"Before the texts go forward, we urge you to review them with an eye to our shared long-term goals for a transatlantic security partnership. With minor changes […] it could alleviate our concerns", Lord reportedly penned.

This is not the first time that the Trump administration has voiced its concerns over the EU's independent defence projects: POTUS, who once called NATO obsolete, slammed the idea of a "true European army" pitched by his French counterpart Emmanuel Macron last November.

© REUTERS / Dado Ruvic
US to 'Reassess' Intel-Sharing With EU Allies Who Use Huawei 5G Tech
Trump dismissed Macron's suggestion of building a pan-European military to protect the continent from China, Russia, and the United States, as "very insulting", and argued that they should first pay their fair share of NATO.

Macron's idea was supported by German Chancellor Angela Merkel. Germany and France have even already started building a joint aircraft and combat system, inviting other European states to join.

President Trump's opposition was backed by Mogherini, who immediately rejected Macron's plan in November, just as NATO Secretary-General Jens Stoltenberg warned that EU efforts should not compete with the alliance, which he called the bedrock of European security.

The US president has repeatedly pressed NATO member states to meet their annual defence spending obligations in the alliance, even insisting that they raise their expenditures to 4 percent of GDP — instead of the existing target of 2 percent.