"China is really not interested and has no need to join the bilateral talks between Russia and the United States on nuclear disarmament", Wang said following talks with Russian Foreign Minister Sergei Lavrov.

Wang stressed that China’s nuclear arsenal is kept to a minimum in line with the country's defence policy.

"We promise we will not use nuclear weapons", the minister said. 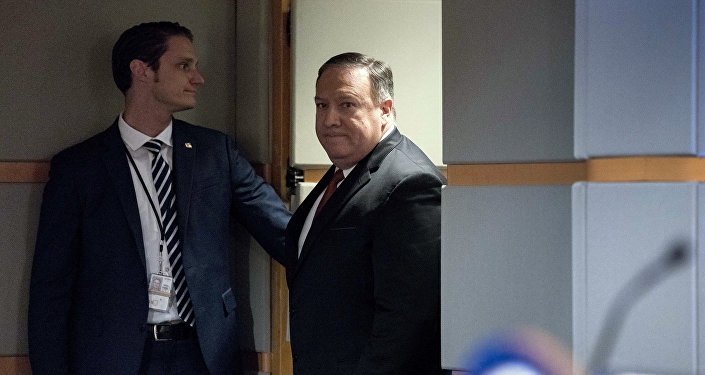 © AP Photo / Andrew Harnik
Pompeo Cancels Moscow Trip to Hold Iran Talks in Brussels, Will Meet Putin in Sochi on Tuesday
The statement comes after the US State Department stated that US Secretary of State Mike Pompeo would discuss possible new agreements on arms control with Russian President Vladimir Putin and Foreign Minister Sergei Lavrov during their meetings in Sochi on 14 May.

The US president told reporters last week that he would soon launch bilateral talks with Russia on a new nuclear arms control deal that could eventually be expanded to include China. Beijing, however, has said it has no intention to join any potential talks.

The New Strategic Arms Reduction Treaty (New START) went into force in 2011 and covers a 10-year period with the possibility of a five-year extension. The agreement limits the number of deployed intercontinental ballistic missiles, submarine-launched ballistic missiles, nuclear armed bombers and nuclear warheads.

Trump in February announced that the United States would withdraw from the Intermediate-Range Nuclear Forces Treaty, which was signed by Soviet leader Mikhail Gorbachev and US President Ronald Reagan in 1987. Following Trump's announcement, Russia suspended its obligations under the INF Treaty.