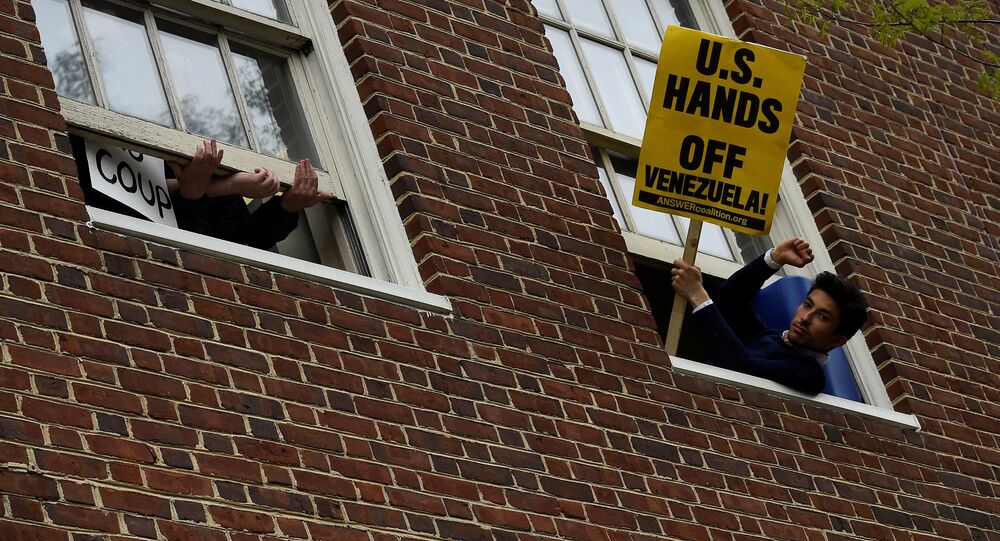 WASHINGTON (Sputnik) - Venezuelan opposition leader Juan Guaido has formally requested the support of US military forces in the ongoing political and humanitarian crisis in the South American country, a letter published by his representative Carlos Vecchio said on Monday.

"We welcome strategic and operational planning so that we may fulfill our constitutional obligation to the Venezuelan people in order to alleviate their suffering and restore our democracy", Vecchio said in the letter to the commander of United States Southern Command Admiral Craig Faller.

In the letter, which is dated 11 May and was published by Vecchio on Twitter on Monday, he requested a meeting between SOUTHCOM and "the appropriate members" of Guaido's inner circle.

"We are grateful to the United States for its friendship, resolve and readiness to support our continued efforts to place Venezuelan people first and look forward to fruitful planning and coordination", Vecchio said.

© AP Photo / Andrew Harnik
Activists Staying in Venezuelan Embassy in US Say Gov't Turned Water Off to Force Them Out
The announcement comes hot on the heels after self-proclaimed interim president Juan Guaido said that he had asked Vecchio to meet with Department of Defence officials to "cooperate" on a solution to the Venezuelan political crisis.

Last week, speaking to CBS, Guaido said that he was still considering a possible US intervention as an "option", claiming that he was trying to find the "best exit out of [the] conflict".

Guaido's statement followed an interview by US Secretary of State Mike Pompeo with ABC, during which he said that US President Donald Trump had "his full range of Article 2 authorities" when it comes to possible military action in Venezuela.

Venezuela has experienced a worsening political crisis since January, when Guaido proclaimed himself to be interim president. Guaido has also declared Vecchio to be his ambassador to the United States.

The United States and 54 countries recognised Guaido, but Russia, China, Turkey and numerous other countries have said they recognise President Nicolas Maduro as the only legitimate head of state in Venezuela.