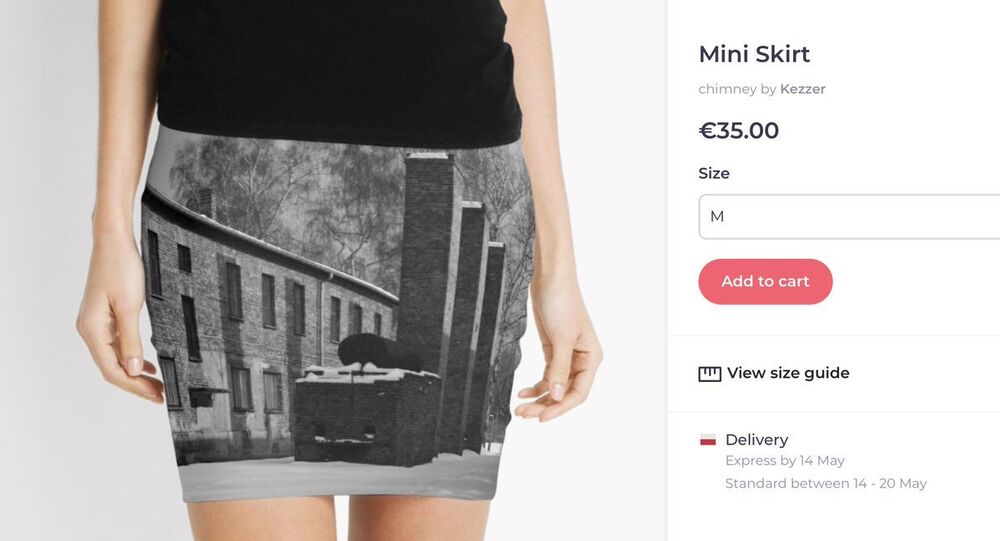 Redbubble is a Melbourne-based online marketplace with additional offices in San Francisco and Berlin, which provides a platform for independent artists to sell their creations.

The Auschwitz Memorial and Museum in Poland has publicly called out Redbubble for selling pillows, miniskirts and tote bags featuring images of the notorious Nazi death camp, having slammed the products as “disturbing and disrespectful”.

.@redbubble Do you really think that selling such products as pillows, mini skirts or tote bags with the images of Auschwitz — a place of enormous human tragedy where over 1,1 million people were murdered — is acceptable? This is rather disturbing and disrespectful. pic.twitter.com/cdPvZGMXC6

The items in question include a $45 throw cushion with a photo of the infamous railroad tracks which led hundreds of thousands to their deaths in gas chambers; a $40 miniskirt featuring an image of the Nazi guardhouse at the concentration camp; and a $15 tote bag depicting an image of Auschwitz’s electric fence used to deter prisoners from escaping.

Redbubble, which says that its mission is to bring more creativity into the world, has replied to the museum by saying that the nature of the content is incompatible with its community guidelines, and the products will be removed from the website.

Thank you for bringing this to our attention. The nature of this content is not acceptable and is not in line with our Community Guidelines (https://t.co/i9QomriweX). We are taking immediate action to remove these and similar works available on these product types. (1/2)

Redbubble is the host of an online marketplace where independent users take responsibility for the images they upload. We have onsite reporting functions in place and are grateful to be made aware of these concerns. (2/2)

The disturbing items have sparked widespread condemnation online, with social media users pointing out over 1.1 million Jews were killed in the camp:

@redbubble your 'independent artists' are a bit sick, and you're twisted for promoting it. Well you've got the wrong type of attention. The millions murdered in the holocaust deserve a better memorial than having pictures of #Auschwitz on a skirt or tote bag. This is not fashion.

Omg!! Redbubble needs to be sued. Im off the chain about this. https://t.co/Agxs0w3PzO

Because what says "smoking hot" more than Auschwitz on a mini skirt?@TheTweetOfGod, send the asteroid NOW, please. https://t.co/dGlaUnrxzc

Just what everyone wants to buy… An Auschwitz pillow, skirt and bag.

Can’t wait for @redbubble’s ‘we’re deeply sorry for any offence caused’ after putting images of Auschwitz on pillows, skirts and other items.

All for the cheapest of cheap publicity. Grotesque and disgusting.

@redbubble. I suggest you visit Auschwitz to witness the horrors first hand. I did. It was harrowing to say the least. Maybe you’d think twice about using these images on mini skirts and handbags. https://t.co/qldkZBOS9E

Auschwitz-Birkenau, the largest concentration and extermination camp during the Second World War, was built and operated by Nazi Germany in occupied Poland and became one of the main symbols of the Holocaust.

READ MORE: US Tourist Faces Up to 10 Years in Jail for Trying to Steal Auschwitz Artifact

Millions of inmates were starved to death and killed in gas chambers before the camp was liberated in 1945 by the Soviet Red Army and transformed into a museum two years later.