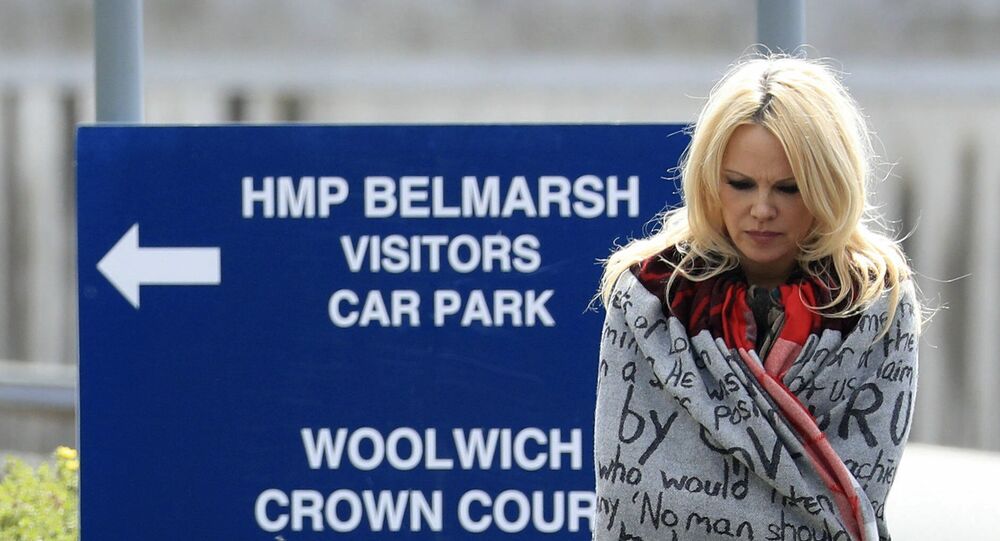 Actress-turned-activist Pamela Anderson visited WikiLeaks founder Julian Assange at London's Belmarsh high security prison on Tuesday, where he is currently being held on charges of violating bail conditions back in 2012.

Julian Assange will not survive extradition to the United States, Pamela Anderson, who became one of the first to visit the whistleblower in a British prison, told TMZ.

The former Baywatch star, who used to visit the Australian-born journalist while he was holed up at the Ecuadorian Embassy in London, is "deeply concerned" about him and his well-being, and told the network that "we're talking about saving somebody's life".

"Seeing him today for the first time… I just know that it's very urgent and it's really important that people know who he really is, and we don't allow him to be extradited because I don't believe that he will be safe in Americans' hands. We need to keep him in the public eye, we need to keep talking about it and we need to give as much support as we can for this person who has just trying to tell us the truth, the truth that we all deserve to know", she said.

Following her Tuesday visit to London's Belmarsh high security jail, where Assange is currently being held, Anderson, alongside WikiLeaks Editor-in-Chief Kristinn Hrafnsson, told reporters that Julian is an innocent person and does not deserve to be in a super-max prison.

The human and animal rights activist lamented the shocking condition the journalist has to live in, namely the fact that he's been cut off from the whole world, being unable to speak to his family and friends.

"We just have to keep fighting because it's unfair, he's sacrificed so much to bring the truth out and we deseve the truth. And that's all I can say", Anderson said.

On 2 May, a London court sentenced Julian Assange to 50 weeks in prison for breaching his bail conditions by taking asylum in the Ecuadorian Embassy in 2012.

Julian Assange, who had been living in the Ecuadorian Embassy in London for seven years, was arrested by British police on 11 April after Quito revoked his asylum status.

© AFP 2021 / JUSTIN TALLIS
UN Rights Experts Call UK's Assange Sentence 'Disproportionate'
Shortly after his arrest, a London court charged him with skipping bail in the UK after a 2012 extradition order to Sweden, where he was being probed over sexual assault charges.

The whistleblower now faces extradition to the United States on charges of conspiring to hack into a government computer to leak classified information. According to media reports, he is likely to face additional charges if extradited to the United States.

The journalist has consistently denied sexual assault allegations, brought up against him in Sweden, stressing that they were politically motivated and designed to have him extradited to the United States since the charges followed the leak of classified war logs.