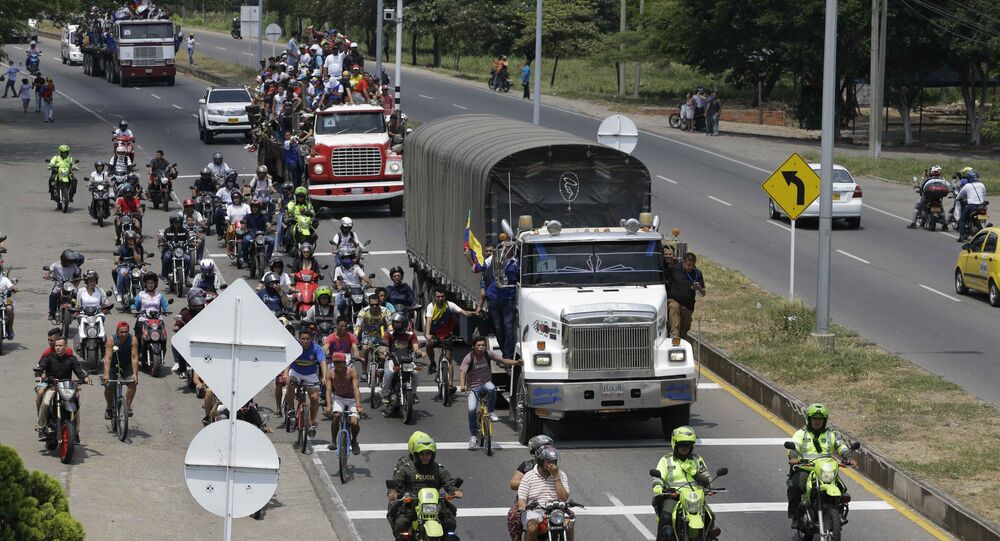 In February, Venezuelan President Nicolas Maduro warned that the US and its allies are attempting to "destroy the independence and sovereignty” of the Latin American country using the “the pretext of delivering humanitarian aid” to it.

The Pentagon plans to send the US Navy's Comfort hospital ship to help resolve what the Department of Defence describes as a humanitarian crisis in Venezuela, US media reports, adding that an official announcement is expected next week.

The media quoted Pentagon officials as saying that the 1,000-bed vessel is due to be sent off the coast of northern Colombia in order to treat those who may flee Venezuela.

The development comes hours after a telephone conversation between Russian President Vladimir Putin and his US counterpart Donald Trump, during which the two leaders specifically touched upon the situation in Venezuela.

Briefing reporters in Washington on the matter, Trump said that President Putin “is not looking at all to get involved in Venezuela other than he’d like to see something positive happen for” the South American country.

Trump added that he feels “the same way” which is why he said “we want to get some humanitarian aid” delivered to Venezuela.

The statement comes a few days after Trump told Fox News that next week may see what he described as lots of developments pertaining to the current situation in Venezuela.

“It’s an incredible mess […]. The place is so bad and so dangerous […] so something is going to have to be done. A lot of things will be going on over the next week and sooner than that. We will see what happens”, Trump said noted.

He added that supplies from Russia and China, which have previously provided humanitarian assistance to Venezuela, were on their way to the South American country.

READ MORE: 'US Action Against Venezuela is Genocide, Mass Extermination of People' — Journo

Earlier that month, Venezuelan President Nicolas Maduro said that he had agreed upon receiving humanitarian assistance with ICRC amid a dire economic situation and a political crisis in the country which escalated in January, when opposition leader Juan Guaido proclaimed himself the country’ interim president.

© AP Photo / Ariana Cubillos
US Would Use ‘SLAUGHTER’ and 'CIVIL WAR' in Venezuela for Intervention - Maduro
The move was immediately supported by the US and a spate of other countries, with Maduro accusing Washington of orchestrating a coup in Venezuela.

In late February, Maduro accused Colombia and the Venezuelan opposition of creating what he described as special gangs that unsuccessfully attempted to ensure the delivery of humanitarian aid to Venezuela on 23 February, resulting in clashes with police on the country’s borders with Colombia and Brazil.

READ MORE: Prof: Intervention in Venezuela Will Be Decided Considering US Internal Politics

Maduro blamed the US and its allies for using "the pretext of delivering humanitarian aid" to try to "destroy the independence and sovereignty of the country".

He also pledged that Caracas would not allow such aid into the country, saying that the country was coping with its difficulties and that US’ “concerns” over Venezuela’s alleged humanitarian crisis were “fabricated by Washington over the last four years to justify intervening” in Venezuela.