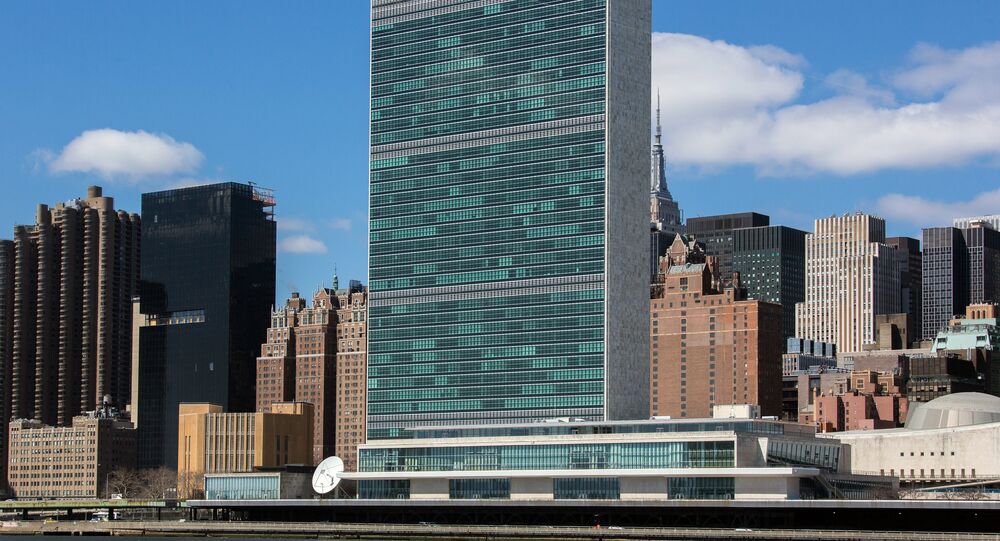 MOSCOW (Sputnik) – The Iranian mission to the United Nations said that the United States warned other UN member states that they should either breach the UNSC Resolution 2231, endorsing the Iran nuclear deal, formally known as the JCPOA, or face punishment.

"The U.S., in clear and flagrant violation of resolution 2231, has withdrawn from the JCPOA. The worse is that, the U.S., as a permanent seat holder in the Security Council, is brazenly threatening other UN Member States, either to violate that resolution or to face punishment. This is truly a destructive and hypocritical policy", the statement read.

© AP Photo / Carlos Barria
JCPOA Doomed? US Could Use All Tools to Push EU Out of Iran Nuclear Deal - Prof
The Iranian mission to the UN recalled that Tehran’s compliance with its commitments under the Iran nuclear deal, envisaging the removal of western Iran sanctions in exchange for Tehran maintaining the peaceful nature of its nuclear program, had been confirmed by the International Atomic Energy Agency (IAE) 14 times.

It also dismissed claims that Iran’s missiles were designed to be capable of delivering nuclear weapons. The mission insisted that the Resolution 2231 did not restrict the activities related to the creation of conventional ballistic missiles.

"Instead of attempting to disseminate fabricated accusations and to exploit the UN Security Council to advance its mischievous policies against Iran, the U.S. authorities must act responsibly in accordance with their international obligations and to explain to the Council members that why their country is violating resolution 2231 and why it is forcing other States to do the same", the mission argued.

© AP Photo / Thibault Camus
France, China Reaffirm Commitment to JCPOA, DPRK Denuclearization - Macron
In a statement issued a day earlier, the mission said that an official from the US State Department held a visit to New York for calling on other UNSC members to hold Tehran accountable for the development and testing of ballistic missiles.

The United States has repeatedly called for tightening international restrictions against Iran in a bid to hinder the development of Tehran’s missile program, despite objections from the Islamic republic.

Moreover, last year, Washington withdrew from the JCPOA and reinstated its sanctions against Iran. China, France, Germany, Iran, Russia, the United Kingdom, and the European Union— the other signatories to the Iran nuclear deal — slammed Washington's withdrawal from the agreement and the reinstatement of sanctions, saying it threatened not only Iran but international security as well as countries and companies that continued to do business with Tehran.