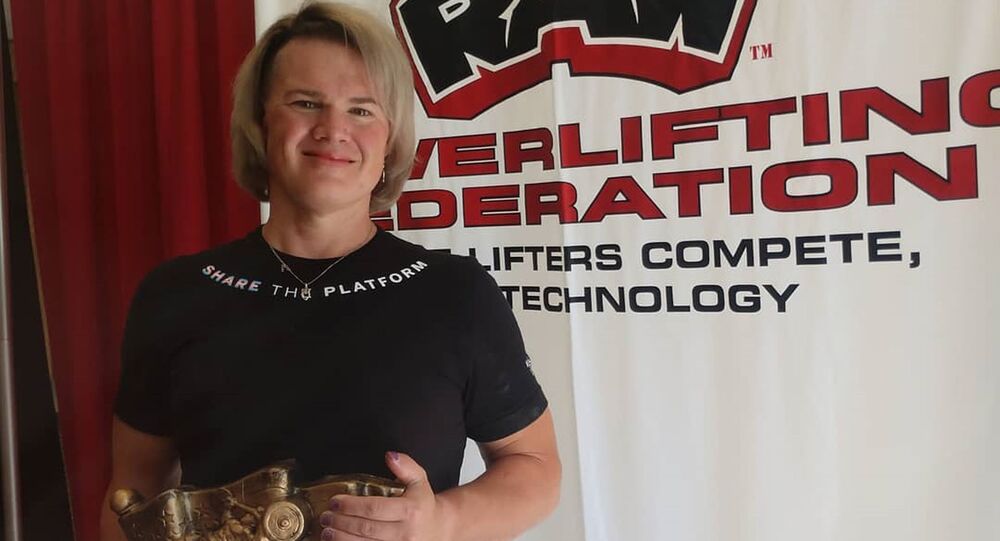 Gregory thanked the Raw Powerlifting Federation, saying that as a transgender lifter, the athlete was not sure of what to expect going into the event, but was stunned at how everyone - spotters, loaders, referees, staff, meet director, and everyone else - made 'her' feel welcome, treating her just like any other female lifter.

What a day, 9 for 9! Masters world squat record, open world bench record, masters world dl record, and masters world total record! Still processing, full meet recap to come a bit later but I do want to thank a few people!💜 — From our initial consultation I told @savvysavit that I wanted to cut to the 82.5kg class, go 9 for 9, and set some records- we did it!!! I don't think she was happy with me cutting but she was there offering her support. When I needed a pick me up or advice she was there! Thank you coach!💜 — A huge thank you to @raw_powerlifting_federation_, from the bottom of my heart! As a transgender lifter I was unsure what to expect going into this meet and everyone- all the spotters, loaders, referees, staff, meet director, all made me welcome and treated me as just another female lifter- thank you! And thanks to all the fans in the audience who cheered me on and congratulated me!💜 — Thank @rrrrachele for making the trip out to support me today, video my lifts, and cheer me on!💜 — And thank you to all the peeps on Instagram who reached out to offer your support!💜 — Now for 🍷 and 🍕!!! — #transgenderwoman#sharetheplatform#transrightsarehumanrights#lgbtq#bemoreawesome#upliftandliftheavy#morefemalestrength#richmondbalance#liftlunchlearnrva#squat#bench#deadlift

However, Olympic women's swimming silver medallist Sharron Davies responded by condemning the "pointless, unfair playing field" where biological women are being beaten by biological men who identify as transgender women.

This is a trans woman a male body with male physiology setting a world record & winning a woman’s event in America in powerlifting. A woman with female biology cannot compete.. it’s a pointless unfair playing field. https://t.co/sI9i3AFANB

The reason we have men & women’s races are because we are biologically different. Performance 100% confirms that. The reason steroids (including testosterone) are on the banned list is because using them gives you an advantage. FairPlay is racing by biology by sex not by gender

​"This is a trans woman: a male body with male physiology setting a world record & winning a woman’s event in America in powerlifting."

Davies lamented that in many sports, especially in the United States, biological men may compete against biological women without requiring surgery or taking hormones.

Its a bloody joke and all getting ready for biological women to boycott certain events.Have a trans category if need be but even better a trans games.Otherwise i’m starting to worry about the backlash and abuse that the trans community will get from spectators. It will happen!

Remember when it was a major violation of Olympic games rules for women to take steroids, etc.? It gave an obviously unfair advantage over others, now MALES claim to be female w/surgery & some meds and HE beats all FEMALE competitors without criticism! Feminists don't give a 💩 https://t.co/heHBaycRmy

Save Women's Sports also drew attention to Gregory on Facebook, with the group sarcastically posting that Mary, born a man, is now very proud of the new trophy from dominating the women's division in powerlifting.

The organisation also rushed to warn that transgender inclusion in women's sports would spell the end of women's sports, adding it was high time to speak up.

How far gone does one have to be to "brag" about winning these events? Even if he truly believes he's a woman, it seems the reality that he still has the strength of a man might occur to him.

Duke Law School Professor Doriane Lambelet Coleman testified that biological males have an inherent athletic advantage over biological females due to the chemical makeup of their bodies, adding that segregating sports on the basis of biological sex has always served to inspire young girls to follow in the footsteps of their fellow biological women.

This is just ridiculous.