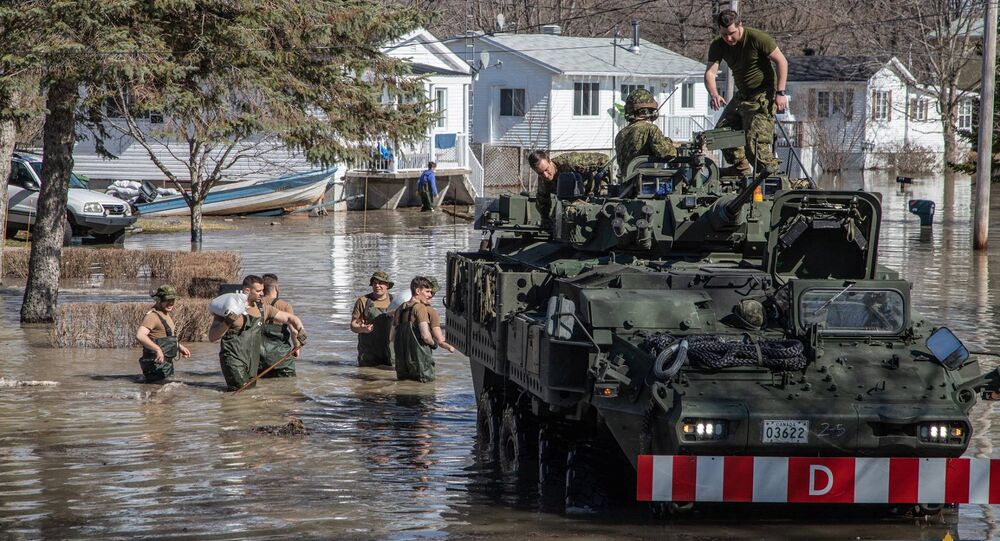 Vast swathes of territory across the provinces of Ontario, Quebec, and New Brunswick have been hit by strong springtime flooding following an unusually harsh winter, with national, provincial, and municipal authorities deploying police, troops, and volunteers to try to keep residents safe and minimise damage.

The Canadian capital declared a state of emergency on Thursday and invited 400 troops to be deployed to the city to help fight massive flooding hitting the region.

"We can no longer do it alone", Ottawa Mayor Jim Watson said, tweeting his "sincerest thanks" to troops arriving in the city.

My sincerest thanks to Canadian Armed Forces personnel who have already mobilized and arrived in Ottawa to help with our flooding mitigation efforts. I'd also like to thank @fordnation and @RalphGoodale for offering their support and assistance in this time of need. pic.twitter.com/urhnfBle3d

The flooding, caused by extensive snowmelt after a heavy winter, is expected to continue in the coming weeks, with water levels expected to rise 11 cm above the May 2017 flood levels over the weekend, according to the Ottawa River Regulation planning Board. Environment Canada has already issued a special bulletin saying that the capital would face "significant rainfall" on Friday, with rain expected to hit further upstream the Ottawa River as well.

BREAKING: Canadian Armed Forces members arriving in Constance Bay.
Up to 400 military members are being deployed to flood zones in Ottawa. #ottnews pic.twitter.com/7YglWu9ZKg

Residents of Ottawa, we need you! Please take some time and help out this week with flood preparation. If you have a day off or a few hours after work to help it would be greatly appreciated. Visit https://t.co/IkIIJbtQEN for details. pic.twitter.com/ikvE6KRkuR

Rising water levels have closed pathways, roads, and pedestrian crossings at bridges in and around the city, including waterfront paths around Parliament Hill.

Across the river in the city of Gatineau, Quebec, over 630 people from over 300 households have already been registered as flood victims, with some residents evacuating and more expected to leave in the near future.

Further east, Quebec's Ministry of Public Security called for a total evacuation in an area near a hydroelectric dam in the Rouge River area, about 140 km northwest of Montreal, with fears that flood waters could soon break through the Bell Falls dam and cause a torrent of millions of tonnes of floodwater to fall into the nearby Ottawa River, about 16 km to the south.

SQ helicopters are patrolling the rural area downstream from the Bell Falls hydro dam. Making sure nobody goes back into the evacuated area #CJAD800 pic.twitter.com/t1a8S5U79i

Bell Falls is a dam that creates falls. and not far, an old disused power generating station.
There are many homes along the relatively flat shore in this area. pic.twitter.com/E4gR5bz09I

Hydro-Quebec said that the pressure already exceeds the dam's design specifications, which are meant to withstand a "millennial" flood. "That means a flood that happens every 1,000 years", Hydro-Quebec director of production and maintenance Simon Racicot said. "We are confident that the structure is solid. But the protocols force us to warn people of the danger. We are entering into an unknown zone right now – completely unknown", he added.

1 / 4
© REUTERS / Christinne Muschi
A view from a Canadian Forces helicopter shows cars driving through a flooded road in the region of Rigaud, Quebec, Canada April 21, 2019

Quebec's provincial police have said that they were helping about 250 people escape the rural area around the dam, mostly residents of small farms and cottages, with some evacuated by helicopter.

Flooding also hit the province of New Brunswick, with high water levels affecting Saint John, the provincial capital of Fredericton, and other communities in the province's south. The provincial government has urged residents to "take all necessary precautions". Troops were deployed in the affected areas of Quebec and New Brunswick earlier this month to help with the evacuation and flood control efforts as flood waters continue to rise.