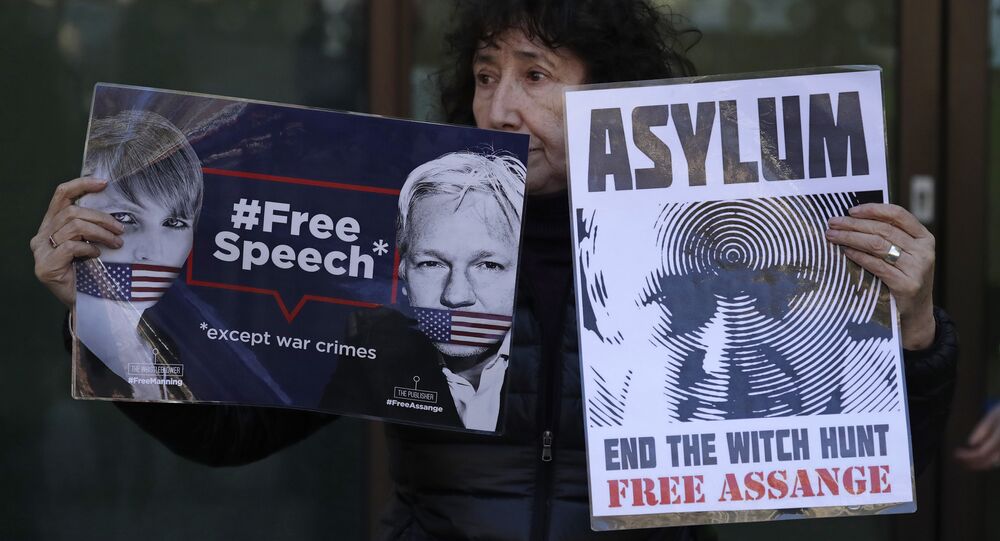 Julian Assange is facing extradition to the US on charges of conspiring to break into a government computer to leak classified information. Washington has until 12 June to provide UK authorities with the necessary documents for Assange's extradition.

The WikiLeaks portal claims the US Department of Justice is attempting to build a case against Julian Assange based on the Espionage Act. Convictions under the Espionage Act can be punished by death.

US Department of Justice is attempting to build a case against Julian Assange based on the Espionage Act. Convictions under the Espionage Act can be punished by death.https://t.co/TFjfPzHk6t

​In its current tweet, WikiLeaks attached a link to the portal Netzpolitik.org, which claims the US Attorney’s Office admitted it was also investigating Assange for the “unauthorized receipt and dissemination of secret information”, citing a DOJ letter addressed to former WikiLeaks spokesperson Daniel Domscheit-Berg.

The Espionage Act of 1917, a World War I era federal law, is intended to protect military secrets and has been used to charge Chelsea Manning and Edward Snowden. Convictions under the Espionage Act can be punished by death.

The United States is officially charging Julian Assange, currently in UK custody, with “conspiracy to commit computer intrusion”, alleging that he assisted Chelsea Manning in cracking a password to infiltrate Pentagon computers and download material to share with WikiLeaks. If convicted, Assange faces a maximum sentence of five years.

Back in December 2017, an FBI agent filed an affidavit to support charging Assange with computer hacking conspiracy. A grand jury subsequently issued an indictment against Assange on 6 March 2018. The latter document was unsealed after Assange’s arrest in London, serving as the official justification for an extradition request.

READ MORE: Five Eyes Came Out of Dark Due to Organisations Like WikiLeaks — Security Expert

However, on 7 March 2018, the same US Attorney, Tracy Doherty-McCormick, wrote a letter to Daniel Domscheit-Berg's lawyers in Germany, requesting a “voluntary questioning” of Domscheit-Berg, “about possible violations of US federal criminal law regarding the unauthorized receipt and dissemination of classified information” — an accusation under the Espionage Act.

Assange gained fame after WikiLeaks published a large number of classified documents, including some that exposed abuses of power and war crimes committed by US troops in Afghanistan and Iraq, and at the Guantanamo Bay detention camp.

READ MORE: Manning Says Prepared to Stay in Jail, Will Not Give Up After Appeal Rejected

In 2012 Assange sought refuge in the Ecuadorian Embassy to avoid extradition to Sweden over allegations of sexual assault.

The WikiLeaks whistleblower resided at the Ecuadorian Embassy in London for a span of almost seven years before his asylum was revoked, leading to his arrest by UK police for jumping bail in Westminster Magistrate's Court.

The next hearing in Assange's case is set to take place on 2 May.