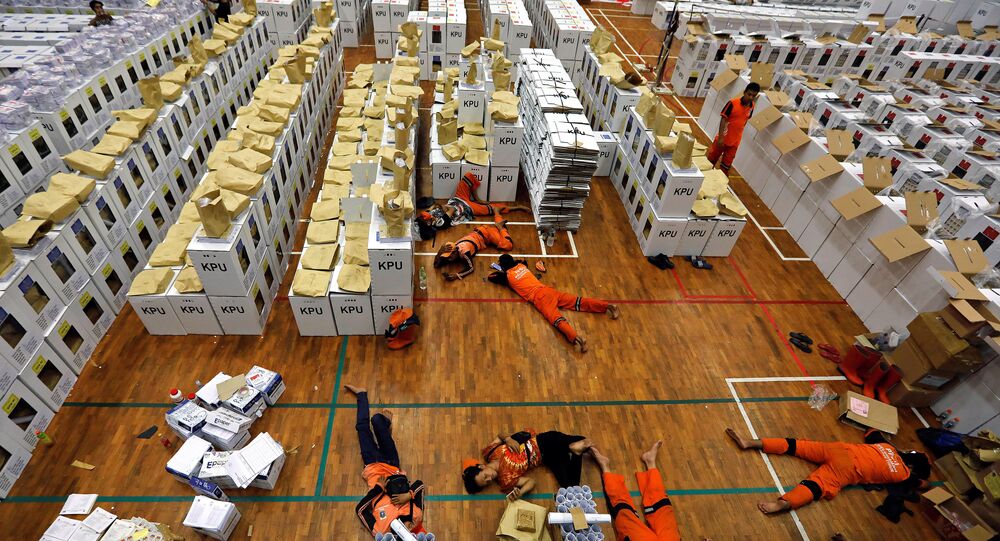 Over 90 Poll Workers Die of Exhaustion During Indonesian Elections

Selvianus Itranbey, the head of Polling Station No. 1 Head in Adodo Molu Village, Tanimbar Islands District, Maluku, died of exhaustion while attending his region's 22 April plenary meeting on ballot recapitulation in the wake of simultaneous legislative and presidential elections.

Speaking to the press in Jakarta Monday, the Chairman of the National General Election Commission said protracted working hours had resulted in the death of 91 officers of the Polling Station Working Committees in 19 Indonesian provinces, with 374 others falling sick due to fatigue.

"We convey our deepest condolences over the death of Selvianus, head of the Polling Station No 1 in Adodo Molu," Syamsul Rifan Kubangun, Maluku General Election Office head, remarked Tuesday.

The KPU intends to meet with the Finance Ministry's officials on Tuesday for discussions on financial compensation to be offered in cases of death and illness that are not covered under insurance.

WTF is going on there?

In the meantime, exhaustion claimed the lives of six TPS officers in South Sumatra, and two were sent to hospital after running polling stations in their areas.
Four officers in North Sulawesi also died from exhaustion arising from organising the elections.

The election officers were reportedly overburdened with tasks involving serving voters and completing the ballot counting process. They were given only meal breaks, with Muslims taking prayer breaks, according to reports.

READ MORE: 'Mikhail Gorbachev' Runs for Office in Indonesian Elections — Reports
Indonesia organised the world's largest and most complicated single-day vote on April 17, 2019, in which 192 million were eligible to cast their ballot.

The logistical challenges were overwhelming, with six million election workers recruited and trained to oversee more than 810,000 polling stations, spread across hundreds of islands. The polling staff were required to travel by airplane, boat, and on foot. On the whole, election officers worked non-stop for almost 48 hours, as they had to make preparations for the logistics and facilities for the electoral process a day before voting.
READ MORE: Crocodile Surfaces With Missing Snorkelers’ LEG in Jaws After Biting His CROTCH
The elections on 17 April were the first vote in the history of the country during which they simultaneously elected a president, vice president, members of the national parliament, and local lawmakers.

Clash of the Titans: Two Komodo Dragons Fight in Indonesia