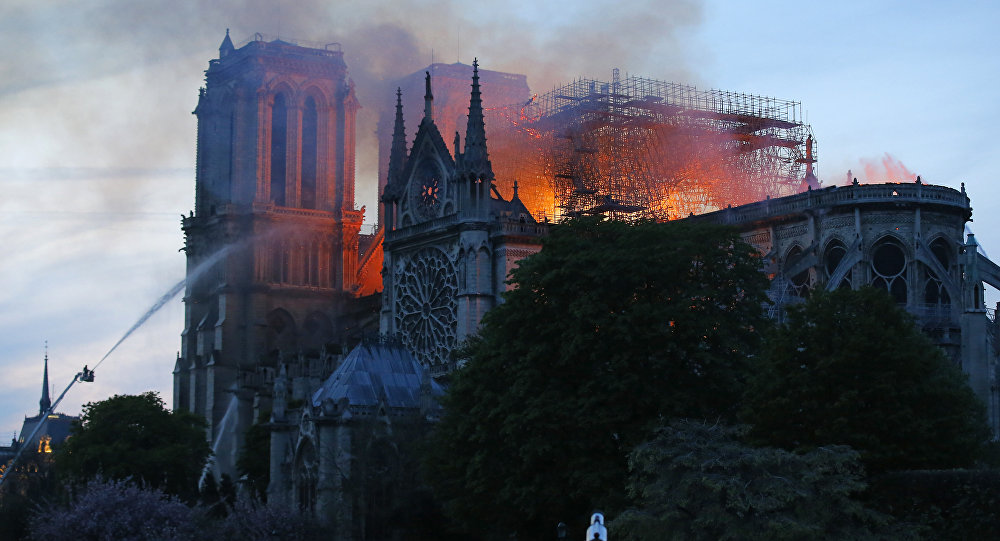 The priceless Paris landmark went up in flames on Monday evening, with the battle to extinguish the blaze taking nine hours.

eBay's administrators have stepped in to take down multiple "section of timber" listings claimed to be the remains of the Notre Dame Cathedral, seemingly demonstrating that no event or object is too sacrosanct for someone to try to make a buck off of it.

Along with the "embers," which went on sale starting at £0.99, the auction site took down over a dozen listings of shirt designs featuring the 'Je Suis Notre Dame' slogan slapped across the chest area, or silhouettes of the cathedral draped in the colours of the French flag.

© Sputnik / Julien Mattia
Oy Vey! Rabbi Reportedly Claims Notre Dame Fire May Be DIVINE PUNISHMENT
eBay took down the listings under its policy prohibiting efforts to "profit from human tragedy or suffering." Only items judged to have a "substantial social, artistic, or political value," or listings by charity groups promising to give proceeds to the disaster's victims, are permissible, according to the company.

Several other listings attempting to profit off the fire were found, including a so-called "Vintage Notre Dame Paris Destroyed By Fire Metal Souvenier Building Figurine," featuring what appears to be an ordinary Notre Dame tourist trinket, but at an inflated price.

eBay warned users who posted the offending listings, and threatened to suspend accounts of those who try to post them again.

Online, some were shocked after finding out about the eBay listings, saying that anyone seeking to make a profit from the Notre Dame tragedy should be ashamed of themselves.

Shame on anyone trying to profit from human misery, hell hath no fury etc: Listing for 'timber from Notre-Dame fire' removed by eBayhttps://t.co/9J7X0Sf0Va pic.twitter.com/nA6kBoXFnG

How can be so sick to do this, while everyone around the world is coming together to fundraise to help restore this iconic building, some thinks it's acceptable to mock such a tragedy. I am discussed and shocked by this. #Notre_dame_de_Parishttps://t.co/SeM4ZcqhKC

Others were more cynical, however, saying it's not like the Catholic Church "never made money from [selling] fake objects," or accusing the "PC Brigade" of stifling "entrepreneurship."

Listing for 'timber from Notre-Dame fire' removed by eBayhttps://t.co/IQHB0vHMSz

Cos the Catholic Church never made money from fake objects, right? pic.twitter.com/r0iCWyyiWo

Yet another example of entrepreneurship being stifled by the so called 'PC Brigade'.

The Notre Dame Cathedral, one of Paris's most widely recognised landmarks, went up in flames on Monday evening, burning into the early hours of Tuesday morning. The cathedral, built between the 12th and 14th centuries, was the site of royal marriages, coronations, and farewell ceremonies for prominent French officials over many centuries, and is a prime example of French gothic architecture. The church was undergoing restoration work when the fire broke out. Authorities are treating the blaze as an accident.

Heart of Paris on Fire: Devastating Blaze in Notre Dame in Facts and Details