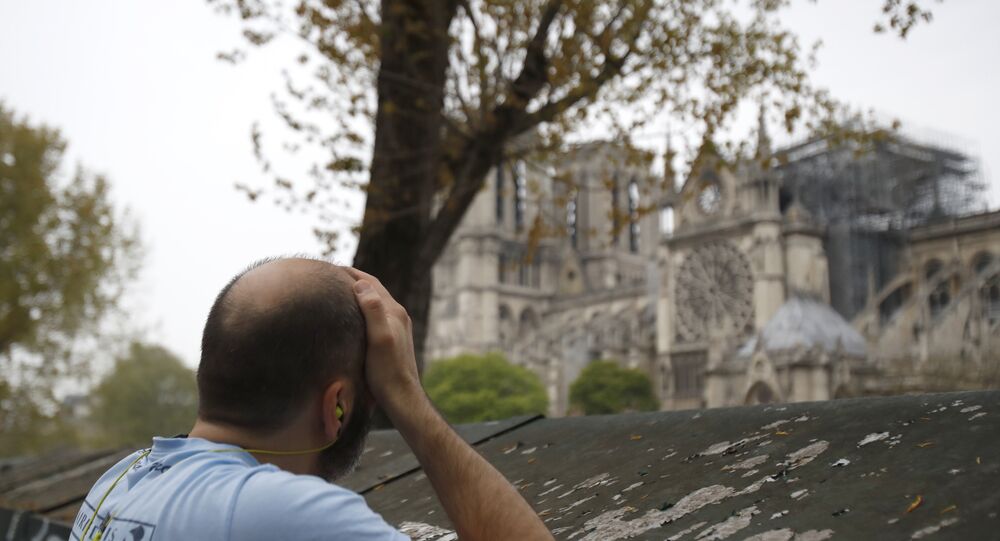 WASHINGTON (Sputnik) - US President Donald Trump has offered French President Emmanuel Macron assistance in the restoration of the iconic Notre Dame cathedral following the devastating fire, the White House announced on Tuesday after a phone conversation between the two leaders.

"This morning, President Donald J. Trump, on behalf of the American people, offered his condolences to President Emmanuel Macron of France for the devastation caused by the fire at the Cathedral of Notre Dame de Paris," the statement said. "We stand with France today and offer our assistance in the rehabilitation of this irreplaceable symbol of Western civilization."

US Authorities, Businessmen Express Their Support

"Apple will be donating to the rebuilding efforts to help restore Notre Dame’s precious heritage for future generations," Cook said via Twitter.

Cook said that he is heartbroken for the people of France and everyone around the world for whom the Notre Dame cathedral was a symbol of hope.

At the same time, US state's Governor Andrew Cuomo pledged that the spire of the One World Trade Center building in New York will be lit in the colours of the French flag in a symbol of solidarity with France in light of the tragic accident.

"New York stands in solidarity with the people of France and Catholics worldwide who are mourning this tremendous loss," Cuomo said in the release. "Today, I am directing that One World Trade Center's 408-foot spire be lit in the colours of the French flag as a tribute to the magnificent Notre Dame Cathedral."

The devastating fire broke out at the Notre Dame de Paris on Monday, causing the collapse of the cathedral's spire and two-thirds of its roof. The blaze was fully extinguished on Tuesday morning. French President Emmanuel Macron has described the incident as a "terrible tragedy" and promised to rebuild the 850-year-old cathedral.

The cause of the blaze remains unclear but may have been linked to renovation work.

Earlier on Tuesday, Paris Prosecutor Remy Heitz said that ignition was considered to be most likely the cause of the incident.