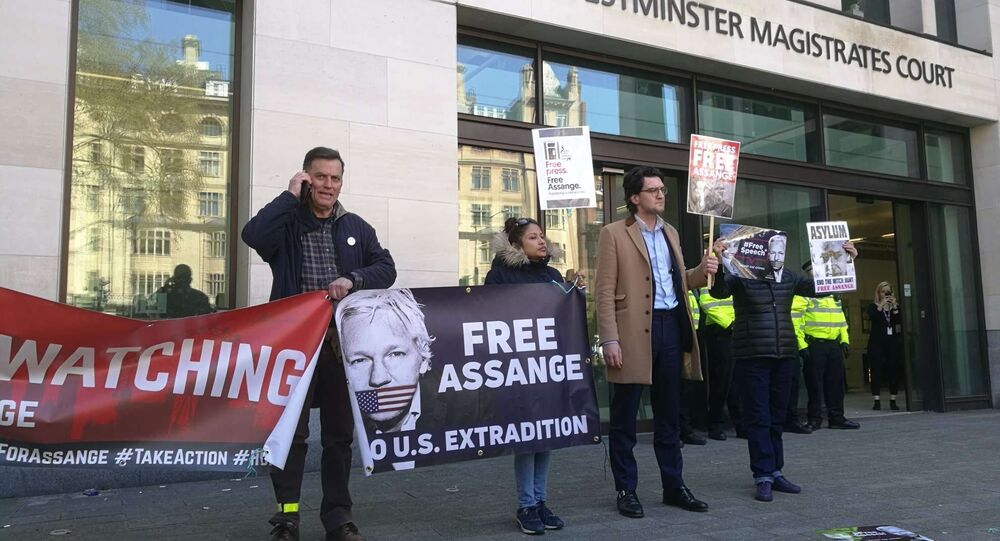 Earlier in the day, British police issued a statement saying that Julian Assange had been apprehended in the Ecuadorian Embassy in London "for failing to surrender to the court" over a 2012 warrant, although they later confirmed that the arrest had been made "on behalf of the United States authorities".

WikiLeaks founder Julian Assange spent seven years trapped in the Ecuadorian Embassy in London, where he sought asylum to avoid imminent extradition to Sweden, where authorities were investigating two separate sexual assault allegations against him.

As UK police confirmed on Thursday that the arrest of Assange earlier in the day was made "on behalf of the United States authorities", here are some facts to know about what the accusations the hacktivist has faced in Sweden, the US, and the UK.

Hours after Assange was arrested on 11 April 2019 in the Ecuadorian Embassy in London, the US Department of Justice announced charges against him, having accused the whistle-blower of conspiring with Chelsea Manning, a former US Army intelligence analyst, "to commit computer intrusion for agreeing to break a password to a classified US government computer".

© Sputnik / Alex Maknoton
World Reacts to Assange Arrest in UK: From 'Dark Moment' for Freedom to 'No Hero'
US prosecutors allege that Manning provided Assange with a password that was stored on US Defence Department computers. If found guilty on hacking charges, then Assange could face up to five years in a US prison.

The United States launched an investigation into Assange's activities in 2010 after his brainchild, WikiLeaks, published a trove of confidential war documents and State Department cables.

The authorities sought to prosecute him and the whistleblowing website under the Espionage Act of 1917, which makes it possible to punish the crime by death.

The year 2010 was not the best for Assange: just months before the US announced that there was an "active" investigation into WikiLeaks, two women in Sweden came forward with accusations of rape and molestation against Assange in August. The Australian whistle-blower has, for his part, flatly denied the allegations, emphasising that the sex was consensual, and maintained that the case was politically motivated because it emerged shortly after WikiLeaks dumped US docs.

Even though he was initially told to leave the country after being questioned, and the probe was closed, a special prosecutor reopened the investigation, saying that she wanted to interrogate him again on two counts of sexual molestation, one count of unlawful coercion and one count of "lesser-degree rape".

© REUTERS / Peter Nicholls
Assange’s Cat Not There, Taken by Assange’s Associates Long Ago - Ecuadorian Embassy
After Assange fled to London, the Swedish side demanded that he be extradited to face the allegations there, and Britain's Supreme Court ruled in favour of his extradition in 2012.

In a bid to avoid extradition, the Australian showed up at the Ecuadorian Embassy in London after losing a final appeal in the British courts to ask for asylum.

The case was completely dropped as the prosecutors claimed that it didn't seem possible to get him to Sweden "in the foreseeable future" and his arrest warrant was officially revoked. Swedish authorities, however, stressed that the case could be resumed if he visited Sweden before 2020.

In light of his arrest, Sweden's Chief Prosecutor Ingrid Isgren said that her office was following the developments closely, while Svenska Dagbladet reported that the Swedish prosecution was considering resuming the probe.

Assange was arrested in the UK in December 2010 after the Swedish prosecution issued an international arrest warrant against him; he was released on bail soon after. While awaiting trial, he was under a written undertaking not to leave the country.

After the British Supreme Court ordered his extradition in February 2011 and rejected his attorneys' appeals to reconsider the decision in June 2012, he took refuge in the Ecuadorian Embassy in order to not be sent to Sweden, and then, supposedly to the United States.

© REUTERS / Henry Nicholls
Thumbs Up From Assange Sitting in Police Van on Way to Court
Even though Sweden later dropped the case, British police said they intended to detain Assange as soon as he would leave the embassy, as he had violated the conditions of his bail.

Following his arrest earlier in the day, a UK judge found Assange guilty of skipping bail in 2012 after an extradition order to Sweden, and ruled that he should remain in custody until his next hearing on 2 May.

Assange, who for his part has pleaded not guilty, will be sentenced at a later date when he could face a maximum sentence of 12 months in jail for the offence.

The UK judge also said that the US needs to produce its case for requesting his extradition from Britain by 12 June.