WikiLeaks wrote on Twitter on 4 April, citing a high-ranked Ecuadorian source, that Assange might be ousted from the embassy within "hours or days", adding that the Ecuadorian authorities might use a leak in the so-called INA Paper offshore scandal, involving Ecuadorian President Lenin Moreno, as a pretext to expel Assange.

Sputnik has discussed the possibility of Ecuador expelling Assange from its London embassy in “days or hours” with Vaughan Smith, a friend of Assange.

Sputnik: Are you surprised by the news that Assange's expulsion from the Ecuadorian embassy could be imminent?

© AP Photo /
Ecuador Stays Silent on Assange's Allegedly Imminent Expulsion From Embassy
Vaughan Smith: No I'm not surprised, there have been scare stories like this before, so I'm not 100% sure it will certainly happen. There are all sorts of factors here.  In this particular instance, Wikileaks (and Julian is no longer the editor of Wikileaks so he's not controlling it) but they issued something called the INA papers and the INA papers are a leak which shows that the President of Ecuador and his family have been involved in corruption — that's what it appears to suggest —so it seems that that has triggered this.

But it's not completely clear to us whether the Ecuadorians are indeed pushing him out, we don't know that yet, it's hard to know.

Sputnik: So would you agree with Wikileaks' assessment that accusing Julian of being responsible for the leak of the INA papers is simply a pretext for ousting him from the embassy?

Vaughan Smith: That is what Wikileaks are suggesting, but I think it's important to understand that Julian is in that embassy, he has not internet connection, his visitations are severely restricted, and so he's not really in a position to be running something like Wikileaks and indeed, further to that, he has indeed formally handed over control to somebody else.

He's not allowed to speak to journalists or make statements, they've got what's called a gagging order on him so he's really not in a position to run Wikileaks so I don't think he's got any responsibility for what what Wikileaks are doing at the moment.

Sputnik:  Is Julian's arrest by UK authorities and extradition to the US therefore inevitable? 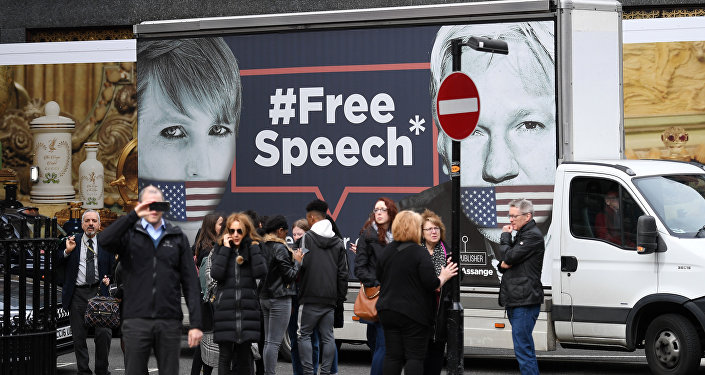 © AFP 2019 / Daniel LEAL-OLIVAS
'Highly Politicised': Activists Rallying Near Ecuadorian Embassy on Assange Case
Vaughan Smith: Well inevitable is a word of certainty and I don't think we can be certain about anything but I think it is highly likely. The reason for that is though the American government have been denying it for 7-8 years, there is clearly a secret indictment. We know that because Chelsea Manning has refused to give evidence to it and as such is going to be sent to prison again having already been in prison for four years because he doesn't want to give evidence to it — so we know there's an extradition. We also know that the British authorities would normally arrest somebody who'd jumped bail and process that case.

So that would obviously give plenty time for the Americans and enable the Americans, having got him out of the Ecuadorian embassy, to go for an extradition. I think it's also important to realise that the current extradition legislation between Britain and America is pretty loose and I think the British public would agree that criminals — murderers, rapists, bank robbers — should of course be sent for extradition. But do we really want to just give people up on the basis that they've been telling the uncomfortable truth that other people don't like? I think that's extremely slippery and shaky.

Sputnik: What would this mean for press freedom and freedom of speech going forward?

© Sputnik / Alex MacNaughton
Assange's Supporters Rally Near Ecuadorian Embassy in UK as He Reportedly Faces Expulsion (VIDEO)
Vaughan Smith: Yes I think it's something that we should seriously be thinking about. I don't think that we should be extraditing people for telling the truth at all. But what I'm hoping, and I think Julian would like this too, if this triggers a debate about transparency…you have to remember this is a debate that Julian triggered and tried to promote but the various forces arrayed against him — that are considerable — preferred to talk about Sweden and rape allegations. And so I think a debate about transparency is something which our society would benefit hugely from. So yes it will trigger this and I think it will engage journalists to think hard about things.

This isn't about the Muller enquiry as people thought it was, this is about the same extradition process that was initiated 7-8 years ago in relation to the Afghan war logs and the diplomatic cables. So it really is something that is historical and has been going there, and Julian was right, he kept saying this is why he had gone to the embassy in the first place, to seek and gain asylum, and it turns out he had proper justification for doing so.

The views expressed in this article are solely those of Vaughan Smith and do not necessarily reflect the official position of Sputnik.