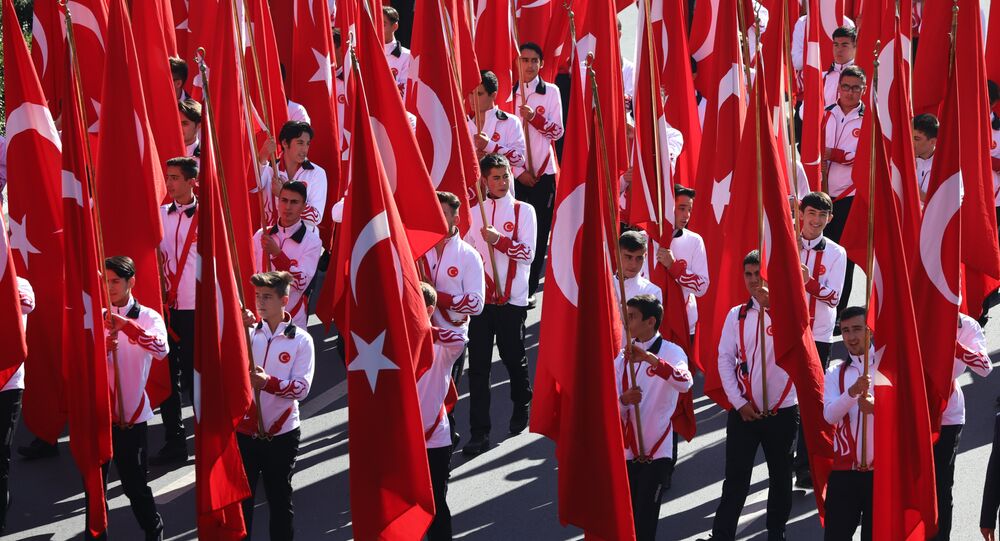 The United States and Turkey remain at loggerheads over Ankara's plans to purchase Russia-made S-400 air defence systems, with Washington repeatedly warning the Turkish side of "grave consequences" if it goes ahead with the acquisition.

Turkish Vice President Fuat Oktay has issued a stark warning to the United States after his American counterpart, Mike Pence, gave Ankara an ultimatum regarding the purchase of Russian S-400 anti-missile systems.

In a tweet, Oktay seemingly emulated Pence's statement, having called on Washington to make a choice between remaining Ankara's friend and backing Kurdish militias in Syria that Turkey considers to be terrorists, affiliated with the Kurdistan Workers' Party.

​The stark message was tweeted out in response to Pence's warning to Turkey, a NATO member, against acquiring Russia-built S-400s, which Washington deems to be a threat to US military equipment.

"Turkey must choose. Does it want to remain a critical partner in the most successful military alliance in history or does it want to risk the security of that partnership by making such reckless decisions that undermine our alliance? We've also made it clear that we will not stand idly by while NATO allies purchase weapons from our adversaries that threaten the cohesion of our alliance", Pence said during a meeting of NATO ministers in Washington.

Turkish Foreign Minister Mevlut Cavusoglu, in turn, said that Ankara had proposed to Washington to form a working group to determine that Russia's S-400s do not jeopardise US or NATO military equipment.

"It will not be integrated into the NATO system… therefore we propose the United States to establish a technical working group to make sure that this system will not be a threat — neither to (US) F-35s nor the NATO systems", Cavusoglu told a panel in Washington.

Earlier this week, Reuters cited unnamed sources as saying that Washington has halted the delivery of F-35 fighter jet parts to Ankara due to its plans on the S-400s.

Following the reports, a State Department official told Sputnik that the US government had warned Turkey that it could face more consequences, including sanctions:

"We have clearly warned Turkey that its potential acquisition of the S-400 will result in reassessment of Turkey’s participation in the F-35 programme, and risk other potential future arms transfers to Turkey, as well as lead to potential actions under Countering America’s Adversaries through Sanctions Act (CAATSA) upon any government entities, private industry, or individuals involved in such a transaction".

The development came after Turkish President Recep Tayyip Erdogan reaffirmed his committment to the acquisition of the Russian system despite US claims that the S-400s could compromise the security of F-35s.

Airman 1st Class Lillian Miller
NATO Envoy Explains Why US Concerned by Russian S-400 Proximity to F-35 Jets in Turkey
The Pentagon has been concerned by the possibility of Ankara acquiring Russian air defence systems along with F-35s, allegedly providing Russian experts with key insights into the radar’s cross sections, flight profile, and other sensitive data related to the jet’s technology.

Turkish-US relations also remain strained over Washington's and NATO's support for the Kurdish People's Protection Units (YPG) in Syria, which Ankara considers to be a terrorist group affiliated with the Kurdistan Workers' Party (PKK) and its People's Defence Forces (HPG). Both are outlawed in Turkey, which also kick-started a military campaign along its border with Syria in a bid to prevent the groups from operating in the area.

The US-led coalition against Daesh*, in turn, is a major ally of the YPG in Syria, and has supplied the group with weapons, training, and military support.

The YPG has strongly opposed Washington's December decision to withdraw its 2,000 troops from Syria since Erdogan was planning to launch a military offensive against the militia in Manbij.

Even though he later decided to postpone it followng a conversation with President Donald Trump, US National Security Adviser John Bolton announced that American troops were going to maintain their presence in northeastern Syria until Turkey guaranteed the Kurdish fighters would be safe.