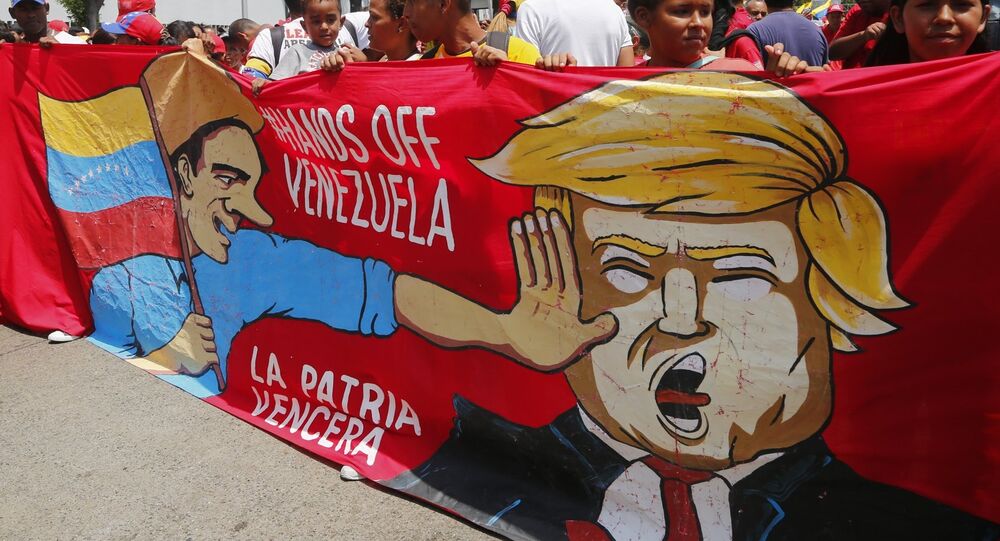 Earlier, US Special Representative for Venezuela Elliott Abrams suggested that the US might impose sanctions against Russia over the arrival of its military specialists in Venezuela, stating that "the Russians will pay a price for this".

US Secretary of State Mike Pompeo stated during an interview with journalist Hugh Hewitt that the US will be combating Russian influence in the western hemisphere in light of its recent actions in Venezuela.

© AP Photo / Evan Vucci
'Russians Will Pay a Price': US Mulls Response to Moscow Over Venezuela

The secretary of state alleged that Russian efforts are directed not only at Venezuela, but also at other South American states as well, such as Peru, Ecuador, Venezuela, Chile, Brazil, and Colombia. Pompeo noted that he would be discussing this "threat" with heads of these countries during his upcoming trip to the region.

The US top diplomat also revealed that President Donald Trump had previously attempted to convince Moscow to "leave" Venezuela, calling the presence of Russian military specialists in the country a "threat", but without success.

"It's, I've tried to convince them it's not in their best interest. I think I failed at that. And so now we will turn to the other tools of American power to ensure that the Venezuelan people get a chance to have the democracy they deserve", he said.

Earlier, the US president's National Security Advisor John Bolton warned countries "external to the Western Hemisphere" against deploying military forces in Venezuela or "elsewhere in the Hemisphere" in a statement made on 29 March. He called such deployments "a direct threat to international peace and security in the region" and accused Venezuela's President Nicolas Maduro of trying to remain in power by using "Russian military personnel and equipment".

His comments were followed by statements by the US special representative for Venezuela, who suggested that Washington could impose additional sanctions against Russia for its actions in Venezuela.

Russian servicemen arrived to the Latin American country in March with the goal of carrying out maintenance on Russian military equipment previously acquired by Caracas under a 2001 agreement. Russian Foreign Minister Sergei Lavrov stated that Russia was simply adhering to the provisions of the agreement and that it had acted "on an absolutely legitimate and legal basis".

The minister further lambasted Bolton's "western hemisphere" rhetoric as arrogant, pointing out that the US has spread its influence and military bases all over the globe. Lavrov also expressed confidence that most regional countries would not allow a US military intervention in Venezuela, something which American officials haven't ruled out in their statements.